Type 2 diabetes can originate in utero

Type 2 diabetes (T2D) is considered to be adult-onset disease, since it typically occurred in middle-age and old adults. There is, hovewer, increasing evidence that risk for development of T2D can be influenced not only by adult lifestyle factors but also by conditions in early life. These findings confirm the developmental origins of health and disease (DOHaD) concept according to which the physiology and structure of the developing organism may be adapted in response to unfavourable environmental conditions, thereby predisposing to many pathological conditions in adult life. In particular, poor nutrition during development can induce structural and functional changes in key organs responsible for nutrient regulation, including brain, liver, adipose tissue, muscle and pancreas. Moreover, exposure to inadequate nutrient supply during in-utero development may ‘program’ the life-course appetite regulation and feeding behaviour. As a result, foetus may be adapted to adverse nutritional conditions by reducing ability to produce insulin and by occurrence of insulin resistance. Such complex metabolic adaptations (commonly referred to as ‘thrifty phenotype’) provide short-term survival benefit in poor postnatal environment via enhanced capacity to store fat in conditions of irregular availability of food resources, but may predispose to the T2D development in conditions of food abundance in postnatal life. More specifically, in conditions of intrauterine growth restriction (IUGR), the foetal adaptation to undernutrition is realized by a variety of mechanisms responsible for the energy and glucose metabolism, such as enhanced peripheral insulin sensitivity for glucose utilization, increased hepatic glucose production, lowered insulin sensitivity for protein synthesis in muscle, and impaired pancreatic development. All these mechanisms provide obvious survival benefit for the IUGR foetuses by promoting both energy uptake and utilization, reducing the demand for amino acids and anabolic hormones production, and elevating glucose production to maintain glucose supply to vital organs, primarily the heart and brain. Such adaptations lead to asymmetrical growth restriction of the foetus, with greatest restriction of muscle and subcutaneous tissue, less of bone, and least of the brain. Collectively, these adaptations allow foetal tissues to maintain the energy-dependent basal metabolic functions at the expense of body growth in conditions of reduced nutrient supply. If these adaptive modifications persist, or are more readily inducible later in life, they have potential to promote energy absorption beyond metabolic capability when energy supplies increase, thereby causing insulin resistance, obesity and T2D in adulthood.

A link between low birth weight and risk for T2D in later life is the most thoroughly studied epidemiological association in this field. This association is apparently mediated by catch-up growth early in life which is an important risk factor for later T2D. The catch-up growth leads to a disproportionately enhanced rate of fat gain in comparison with lean tissue gain. Such preferential catch-up fat is partly driven by mechanisms of energy conservation operating through suppression of thermogenesis and resulting in the development of thrifty ‘catch-up fat’ phenotype generally characterized by insulin and leptin resistance. A schematic representation of hypothetical regulatory pathways involved in developmental programming of T2D is presented in the Fig.1. 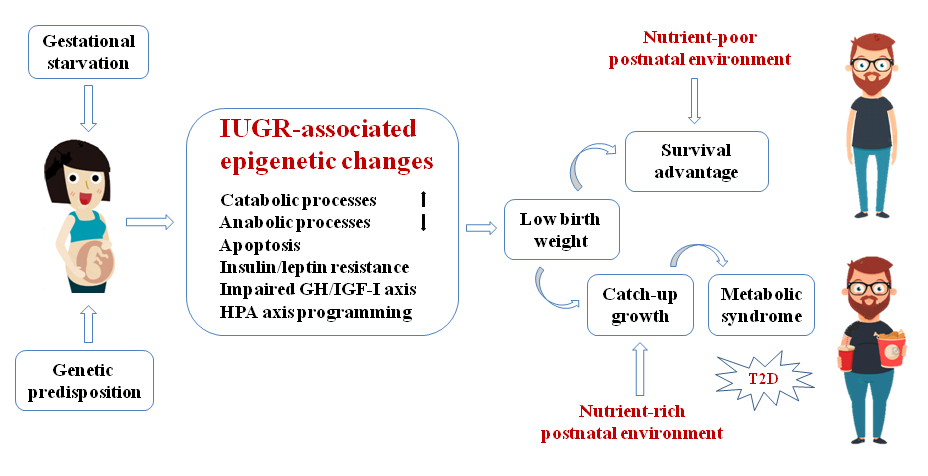 Precise molecular mechanisms responsible for the developmental programming of T2D are not yet thoroughly characterized. In many recent studies, compelling evidence was provided that changes in epigenetic regulation of gene expression (heritable alterations in gene function without changes in the nucleotide sequence) is the most plausible mechanism for the link between unfavourable early-life conditions and subsequent risk for T2D. Since epigenetic alterations  unlike genetic mutations, are potentially reversible, pharmacological modification of epigenetic marks contributing to T2D development can provide a promising approach to prevention and treatment of T2D and associated disorders.