UFACS3: A fast and reliable method for the isolation of three non-parenchymal liver cell types from one mouse

Liver fibrosis is a chronic liver disease due to a viral infection or to repeated exposures to alcohol, drugs or unhealthy food. Upon liver damage, a cascade of cellular interactions is initiated to collectively try to restore the liver architecture and homeostasis. In vitro and in vivo models are key to study the pathways involved in liver fibrosis and for the development of therapeutics. Four major liver cell types that play a role in fibrosis are hepatic stellate cells (HSCs), liver sinusoidal endothelial cells (LSECs), Kupffer cells (KCs) and hepatocytes (Fig. 1a). To perform in vitro fibrosis studies one prefers to not work with (cancerous) cell lines derived from these cells but to study the mechanisms and interactions of primary liver cells. To obtain these primary liver cells from rodents, it is detrimental to work with isolation procedures that are fast and yield pure single cell populations in significant amounts. Hepatocytes can be isolated with the well-established Percoll gradient centrifugation procedure, but isolation protocols for other (non-parenchymal) liver cell types are often more time consuming and depend on expensive antibodies needed to select for the individual cell types. 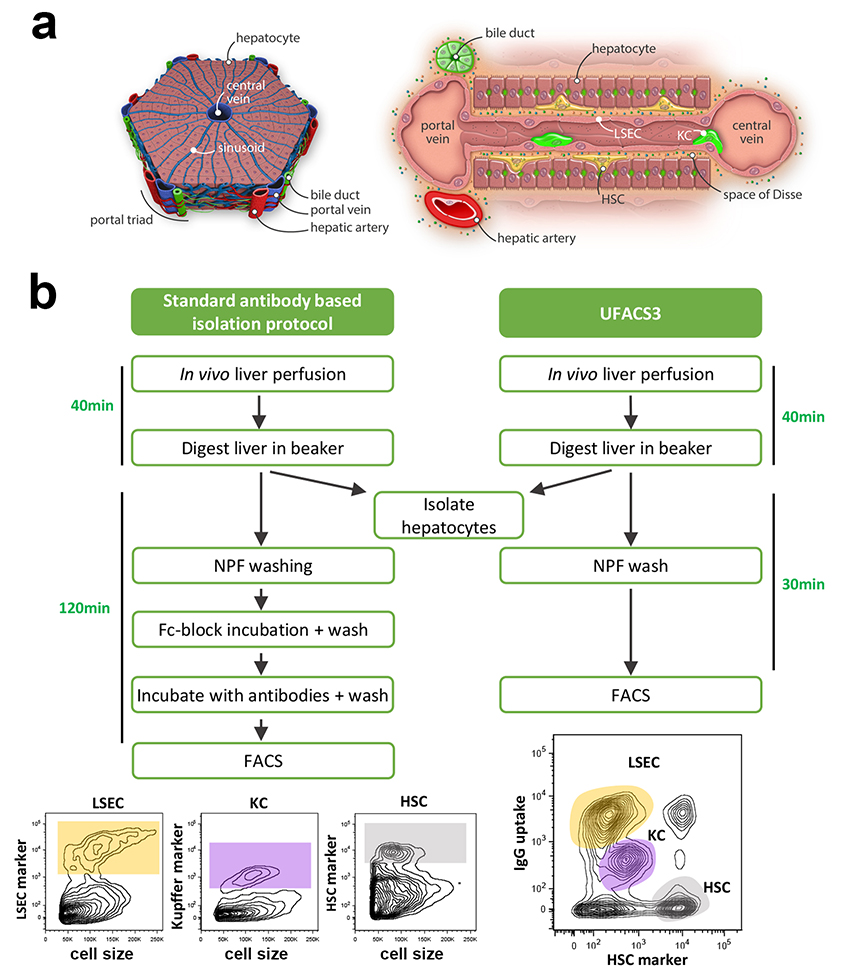 Fig. 1. HSCs, KCs and LSECs can be simultaneously isolated by FACS from one mouse liver. a. The liver is divided in 50 000-100 000 hepatic lobules (left), consisting of multiple hepatic sinusoids (right). In these sinusoids the four major cell types, being hepatic stellate cells, liver sinusoidal endothelial cells, Kupffer cells and hepatocytes, reside as indicated. Adapted from “3D in vitro models of liver fibrosis” (van Grunsven, 2017), with permission from Adv Drug Del Rev. b. A schematic parallel overview of a standard cell-type specific antibody-based isolation method and the UFACS3 method.

LSECs and KCs can take up immune complexes via their Fc-receptors, while HSCs can be identified based on an autofluorescent signal (328nm) that is emitted from lipid droplet containing retinyl esters in these cells. In this paper we developed a procedure that uses these functional characteristics of the three liver cell types for their isolation. Injection of mice with Alexa647-labeled donkey anti-rabbit immunoglobulin G (IgG) antibodies results in a quick uptake of these antibodies only in LSECs and KCs and not in HSCs. These three populations can be easily visualized by fluorescence activated cell sorting of the non-parenchymal fractions, only 2 hours after injection (Fig. 1b). Immunocytochemistry stainings of the sorted cell populations with cell type specific markers showed that these population were very pure: LSEC 98 ± 1%, KCs, 98 ± 1% and HSCs, 97 ± 3%. The procedure works efficiently on healthy Balb/c mice and C57BL/6 mice as well as on Sprague Dawley rats. Even more important, the isolation procedure works efficiently to isolate the three populations from mice with a liver disease such as carbon tetrachloride treated mice or from mice that underwent a bile duct ligation, both established models of liver fibrosis.

Finally, our new isolation protocol offers an important added value, working towards the reduction of the use of animals in research. Using this technique, at least these four cell types can be isolated from one mouse, with a better yield and more cost-effective than the standard cell type specific antibody-based protocols. To complete the evaluation of the isolated cells, cell functionality in vitro was tested. The in vitro activation of HSCs and KCs and the scavenging capacities of KCs and LSECs were scored at least as good as for cells isolated with traditional isolation protocols. Additionally, we were able to form 3D hepatic spheroids with these cells together with hepatocytes and all four cell types were still detectable after four days (Fig. 2). We called this method the UFACS3 method, which stands for UV-FACS-based isolation of three non-parenchymal liver cell types.