Glows in the dark after removing energy input, named room-temperature phosphorescence (RTP), has got enormous attention because of its various application in biological imaging, light-emitting devices, information storage and encryption, and so on. However, achieving ultralong RTP (generally from seconds to hours) are extremely difficult due to two main issues: i) The intrinsically weak spin−orbit coupling of purely organic molecules makes it hard to achieve efficient intersystem crossing (ISC); ii) Long triplet state (T1) lifetime means that T1 will suffer tremendously quenching by a very low concentration of impurities even in crystals. 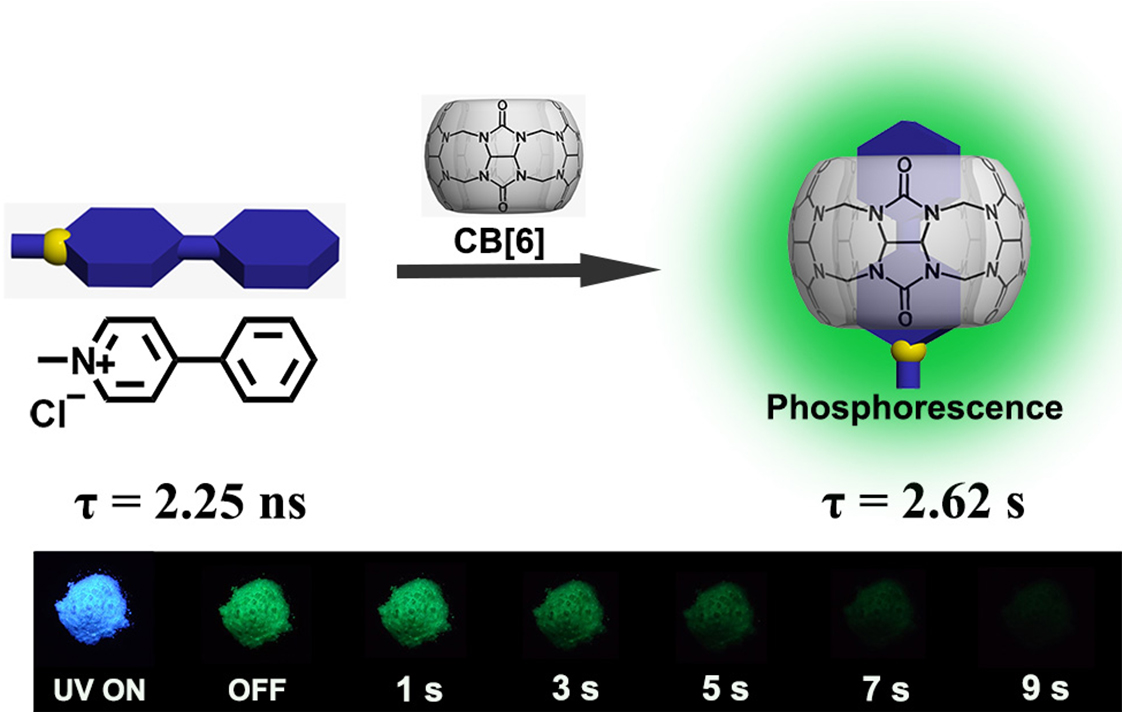 Herein, we report a persistent RTP of solid-state supramolecule between macrocycle host cucurbit[6]uril (CB[6]) and heavy-atom-free phenylmethylpyridinium guest. The long-lived phosphorescence completely depend on the host-guest complexation, revealing that the non-phosphorescent guest exhibits 2.62 s ultralong lifetime after being complexed by CB[6] under ambient conditions (Fig. 1). The ultralong RTP is because of tight encapsulation of CB[6] which boosts intersystem crossing, suppresses nonradiative relaxation and possibly shields quenchers. We then synthesized guests with halogen atoms (F, Cl and I), methyl-pyridinium chloride and styryl-methyl-pyridinium chloridewere to explore the relationship between the structure of the guests and the phosphorescence properties of the complexes. It is proved that the structure of phenylmethylpyridinium is vital for the generation of phosphorescence and the substituent is able to tune the phosphorescent properties.

Moreover, several phosphorescent complexes possessing different lifetime are prepared and successfully applied in triple lifetime-encoding for data encryption and anti-counterfeiting. As illustrated in Figure 2 (dotted box), the digital pattern was painted with different complexes on flexible paper, among which PYCl/CB[6] was used to label the black part, the dark gray part was coated with PCC/CB[6], and the light gray part was painted with PBC/CB[6]. In daylight, only a colorless pattern was obtained. When a UV lamp with 365 nm excitation was turned on, an intense green “1054” appeared because of the high quantum yield of PYCl/CB[6]. On switching the UV lamp off, the relatively short lifetime of PYCl/CB[6] (5.40 ms) made its phosphorescence disappear immediately, while long-lived PCC/CB[6] (275 ms) and PBC/CB[6] (2620 ms) contributed to the moderate green “6849”. Later, the phosphorescence of PCC/CB[6] became invisible, and the pattern that remained was “5213”. Therefore, we achieved triple lifetime-encoding for information encryption and anticounterfeiting by subtle utilization of the diverse lifetimes of phosphorescent complexes. 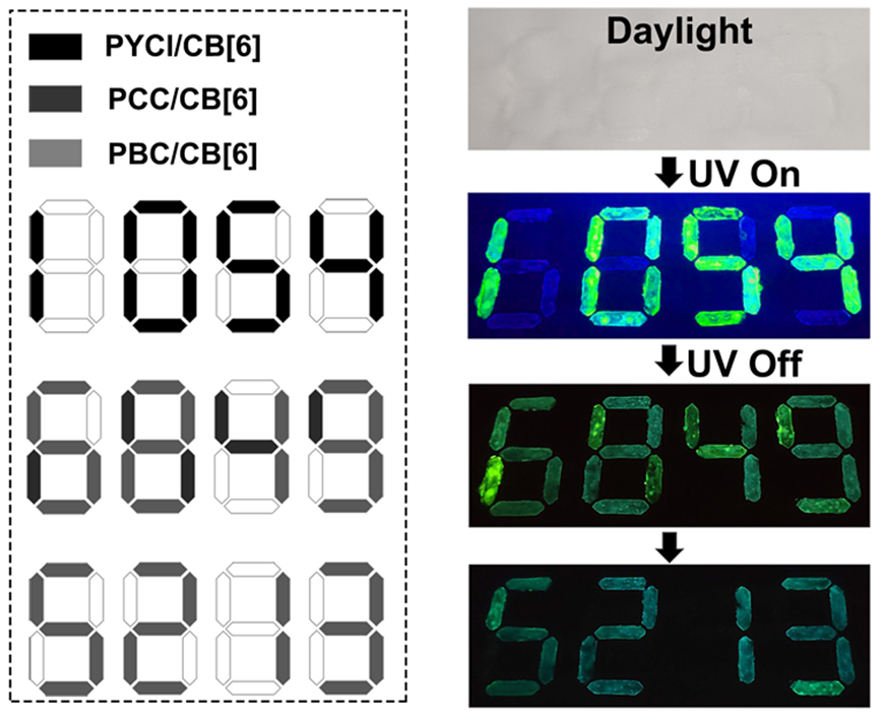 We present a concise and universal solid-state supramolecular strategy to realize purely organic heavy-atom free ultralong RTP based on CB[6] and phenylmethylpyridinium. This strategy possesses the advantages of facile preparation, universality and robust RTP without rigorous conditions such as low temperature, crystallization and deoxygenation. The result will help to understand purely organic ultralong RTP and promote the generation of better (longer lifetime, higher efficiency and more robust) RTP materials that may stimulate the development of data encryption, organic devices, bio-imaging, and so on.