Unboxing the role of TBX1 in palatal development: a gene profiling study

Cleft palate (CP) is a disease where there is an opening or split in the palate (the roof of the mouth). CP has been reported in 1 to 2 of every 1000 births worldwide and is the most frequent craniofacial birth defect in humans. CP phenotypes observed in humans include various subtypes of CP termed as complete CP, incomplete CP, and submucosal CP (a cleft occurs only in the muscles of the soft palate). Since the palate consists of both a bone-lined hard palate and a bone-free soft palate, incomplete CP includes the mildest forms of CP, which are soft palate cleft and bifid uvula. The soft palate mainly consists of muscle, and is crucial for proper speech, and swallowing. Since CP can contribute to facial deformities and problems (Fig. 1), such as difficulty with swallowing, nasal voice, dental malocclusion, and chronic ear infections, identifying the etiology of CP is important. 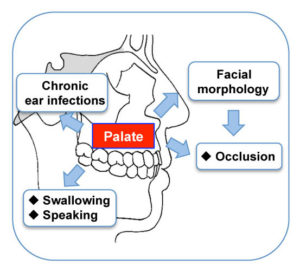 In this study, we performed gene profiling of developing palatal shelves isolated from wild type and Tbx1KO mice embryos to examine the function of the TBX1 protein in palatogenesis. The deletion of Tbx1 gene in mice results in the formation of different subtypes of CP and small mandible, similar to the phenotypes observed in humans. A small mandible leads to backward displacement of the tongue and can prevent the palatal shelves from closing, resulting in a CP. The palatal shelves are composed of epithelium and mesenchyme (Fig. 2). Gene ontology analysis indicated that genes associated with the development of the muscle, nervous system, biomineral tissue, and collagen biosynthesis were dysregulated in Tbx1KO palatal shelves (Fig. 2). Interestingly, genes associated with human CP, specifically, myosin heavy chain 3 (Myh3), nebulin (Neb), and gamma-aminobutyric acid type A receptor beta1 subunit (Gabrb3) were downregulated in Tbx1KO palatal shelves.

These findings highlight a previously unknown role of TBX1 in palatal development and identify novel connections between Tbx1 and disease-causing genes of CP. We previously reported that the deletion of Tbx1 results in the abnormal epithelial fusion between the palatal shelves and the mandible, which induces CP by inhibiting the elevation of the palatal shelves (Funato et al., Hum Mol Genet, 2012). The various degrees of CP phenotypes of Tbx1KO mice could be induced by the pathogenic adhesion-separation of the oral epithelium, together with compromised development of palatal shelves and small mandible (Fig. 2). The contributions of multiple factors may result in various CP phenotypes, including submucosal CP and soft palate cleft present in 22q11.2 deletion syndrome.