Lean and Six Sigma principles are used in manufacturing and more recently, healthcare, to eliminate waste, defects, and variability in processes. These philosophies are used to develop solutions to workflow challenges in an effort to improve process efficiency. 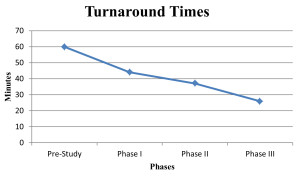 The University of North Carolina Medical Center’s Department of Pharmacy prepares all hazardous and chemotherapy drugs in the Cancer Hospital Infusion/Inpatient Pharmacy (CHIP). Since opening the North Carolina Cancer Hospital in 2009, the CHIP has seen an increase in the total volume of chemotherapy preparation by 42%. Over this same time period, the daily volume of outpatient infusion clinic chemotherapy increased by 51%. At the time of this project, the CHIP was dispensing approximately 215 preparations per day.

The turnaround time for chemotherapy consists of the time the pharmacy receives the chemotherapy order, two pharmacists independently double check the order, a technician prepares the medication, a pharmacist checks the prepared medication, and the prepared medication is delivered to the patient. Turnaround time is important to maintain the flow in the infusion clinic and for patient satisfaction.

In 2011, the turnaround time of prepared chemotherapy doses from the CHIP to the Adult Infusion Outpatient Clinic averaged 60 minutes. Cancer Hospital leadership determined 60 minutes was too long for chemotherapy preparations and was a contributor to patient dissatisfaction. As such, an interim turnaround time goal of 45 minutes was established for 2012 with an ultimate goal of 30 minutes or less for 2013. We decided upon a three phase project with the goal to have turnaround times less than 30 minutes.

The results demonstrate that implementation of Lean Six Sigma principles can dramatically improve the workflow and efficiency to reduce the average time that patients wait for their chemotherapy.