The origin of the Yiddish language (spoken at least since the 9th century A.D.), and consequently Yiddish speakers, has been debated for the past several centuries, mainly between linguists. While the Rhineland hypothesis suggests a German origin, the Irano-Turko-Slavic hypothesis, proposed by Paul Wexler, suggests a more complex origin starting with Slavic lands in Khazaria, followed by Ukraine, and finally Germany where the language was relexified, i.e., adopted a German vocabulary, but retained its Slavic grammar, which is why Yiddish was oftentimes called “Bad German.” 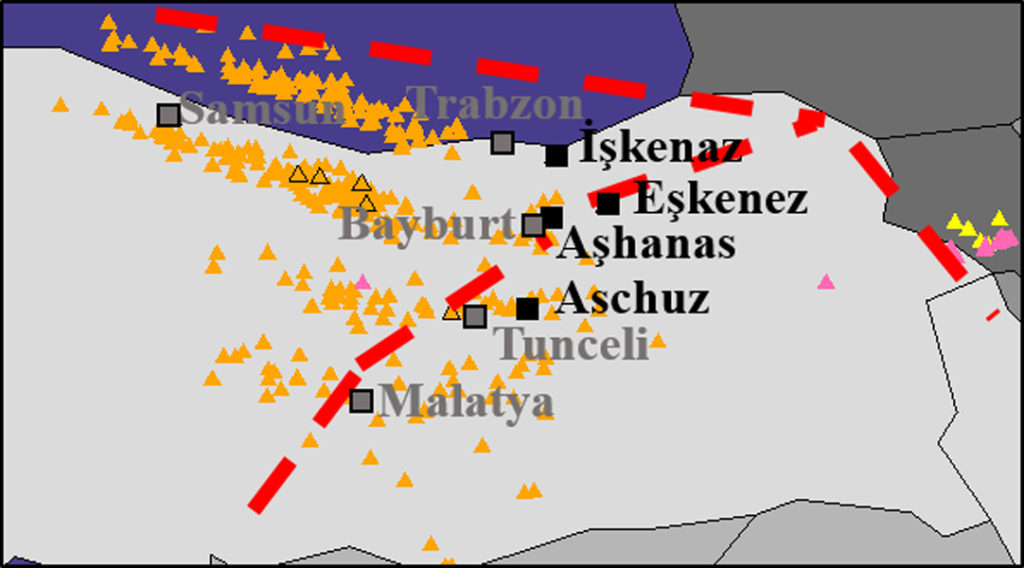 To evaluate these two hypotheses we applied the Geographic Population Structure (GPS) tool to the genomes of over 360 sole Yiddish and non-Yiddish speaking Ashkenazic Jews. This is the largest study of Ashkenazic Jews and the first one to study Yiddish speakers. Surprisingly, GPS honed in an obscure region in northeast Turkey. There we found four primeval villages (one was abandoned in the mid-7th century A.D.) whose name may be derived from the word “Ashkenaz,” suggesting that this was the central location of ancient Ashkenaz.

The search for ancient Ashkenaz has been one of the longest quests in human history lasting at least 1000 years (perhaps second only to Noah’s Ark that has been searched at least since the 3rd century A.D.). This is the only place in the world with these placenames and they cluster within a hub of atrade routes, as can be expected from a nation of traders where linguistic, genomic, historic, and geographic evidence converge.

Evidently, the ancient Ashkenazic Jews were merchants who, together with Iranian Jews, plied land and maritime trade routes and invented Yiddish as a secret language with 251 words for “buy” and “sell” to maintain their monopoly. They were known to trade in everything from fur to slaves. These findings are consistent with historical records depicting Jews as merchants. Indeed, by the 8th century the words “Jew” and “merchant” were practically synonymous. Around that time, Ashkenazic Jews began relocating to the Khazar Empire to expand their mercantile operations. Consequently, some of the Turkic Khazar rulers and the numerous Eastern Slavs in the Khazar Empire converted to Judaism to participate in the lucrative Silk Road trade between Germany and China.

After the fall of Khazaria (10-13th centuries) Ashkenazic Jews split into two groups. Some remained in the Caucasus and others migrated into Eastern Europe and Germany that has been incorrectly proposed to be the original land of Ashkenaz. The two groups still call themselves Ashkenazic Jews, however the name became more strongly associated with the latter group. After their separation Yiddish became the primary language among European Jews and underwent relexification by adopting a new vocabulary that consists of a minority of German and Hebrew and a majority of newly coined Germanoid and Hebroid elements that replaced most of the original Eastern Slavic and Sorbian vocabularies, while keeping the original grammars intact.

Further evidence to the origin of AJs can be found in the many customs and their names concerning the Jewish religion, which were probably introduced by Slavic converts to Judaism, like the breaking of a glass at a wedding ceremony and placing stones over tombstones.

Our study demonstrate the potential of the GPS technology combined with citizen Science to shed light on the forgotten chapters of our history.

Direct link to the PDF file of original paper in the webpage: oxfordjournals.org