Hyperbaric oxygen therapy (HBOT) involves breathing in pure oxygen at an air pressure three times higher than atmospheric pressure. This allows more oxygen to enter the lungs, dissolve into the circulation, and ultimately reach cells. The future of HBOT is promising, particularly for diseases with limited or sub-optimal treatments. One example is hematologic malignancy, which often requires bone marrow transplant to cure.

Bone marrow transplant (BMT) involves harvesting healthy stem cells from the marrow of a genetically matched donor and infusing them into a recipient whose cancerous marrow has been destroyed. The donor stem cells migrate from the bloodstream into the marrow through a physiologic process called homing. In the marrow, the donor stem cells differentiate into mature cell types: erythrocytes, leukocytes, and platelets. This stage is termed engraftment, and corresponds to BMT success. The engraftment period may take up to several weeks, and is associated with complications like infections. The longer the engraftment period, the greater the chances of BMT failure or death from infections. 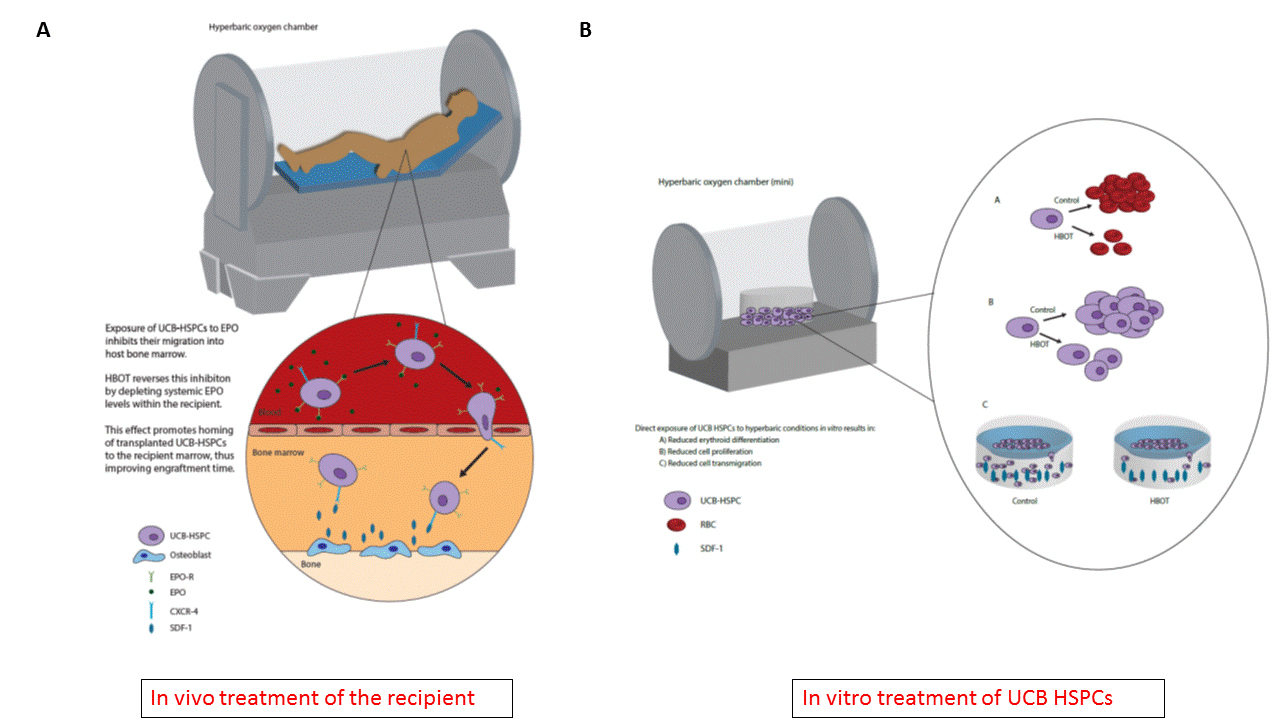 Recently, new sources of donor stem cells have been explored. Apart from human bone marrow, these precious, undifferentiated cells are found in another distinct place: umbilical cord blood. Umbilical cord blood can be painlessly acquired after a mother delivers, contrasted with the invasiveness of harvesting donor marrow. The cells within — termed umbilical cord blood hematopoietic/progenitor cells (UCB-HSPCs) — are associated with a decreased risk of complications and a simpler genetic matching process. One major disadvantage of UCB-HSPCs, however, is their impaired bone marrow homing, and thus increased engraftment time.

That is, until recent animal research demonstrated that pre-treating mice with HBOT significantly improves UCB-HSPC engraftment. Blood count recovery and engraftment were also improved in a small pilot clinical trial. HBOT effect was linked to lowering a hormone called erythropoietin (EPO) in the blood (Fig. 1A). EPO is a hormone produced by the kidneys in response to low oxygen in the blood. Unfortunately, HBO effect on EPO appears transient. What would happen, then, if HBOT was performed again — this time after the UCB-HSPCs were transplanted? Would the beneficial effects on homing reemerge? Is it safe to expose stem cells to HBOT? These are the questions our study aims to address.

We characterized the direct effect of HBOT on UCB-HSPCs in vitro to determine how exposure to HBOT post-transplant might influence cell behavior in vivo. This study revealed three major effects of HBOT on UCB-HSPCs: decreased proliferation, diminished erythrocyte differentiation, and impaired migration across a stromal cell-derived factor 1 (SDF-1) gradient (Fig. 1B). SDF-1 is a signaling molecule responsible for directing donor stem cells to the marrow during BMT. Thus, the latter finding signifies that re-treatment with HBOT post-transplant is associated with a decrease in homing—the opposite of the pre-transplant effect.

To explore a mechanism for these observed effects, we measured levels of reactive oxygen species (ROS) — highly reactive molecules derived from oxygen which are also involved in stem cell regulation. Initial exposure to hyperoxia (and subsequent generation of ROS) is known to promote migration, differentiation, and proliferation of HSPCs. Prolonged hyperoxia, however, shows the opposite effect. We examined UCB-HSPCs twenty-four hours following HBOT and discovered a significant increase in nucleic and cytoplasmic ROS levels. Thus, it may be that ROS formation, induced by HBOT, is responsible for the observed decrease in cell migration, differentiation, and proliferation of UCB HSPCs.

Given the complexity of the homing process, there is likely more to the story than ROS alone. Further in vivo studies are needed to fully understand the mechanism of cellular changes induced by HBOT. Meanwhile, HBOT remains an exciting adjunctive treatment option for patients undergoing BMT for life-threatening hematologic malignancies.