The fascia of the hand is a thin layer of connective tissue that wraps around the muscles, tendons, and neurovascular constitutions in the palm of the hand, providing structural support and integrity. The palmar and digital fascia are composed of a network of flexible collagen fibers, which run longitudinal, transversal or vertical relative to the palm. These collagen fibers are sometimes connected to the ligaments, tendon sheaths, and skin of the fingers.

Dupuytren’s disease is a genetic disorder in which excess collagen is produced and deposited in the fascia of the hand. Individuals of Celtic descent are most commonly affected, whereas peoples of primarily Asian (excluding Japanese) or black heritage are rarely affected.  Unrestricted production of collagen results in nodules which protrude from the palm. As the unnatural collagen deposition continues, these nodules may progress to thick palpable cords which can cause contracture of the fingers at the finger-palm juncture, as well as at either joint of a given finger. 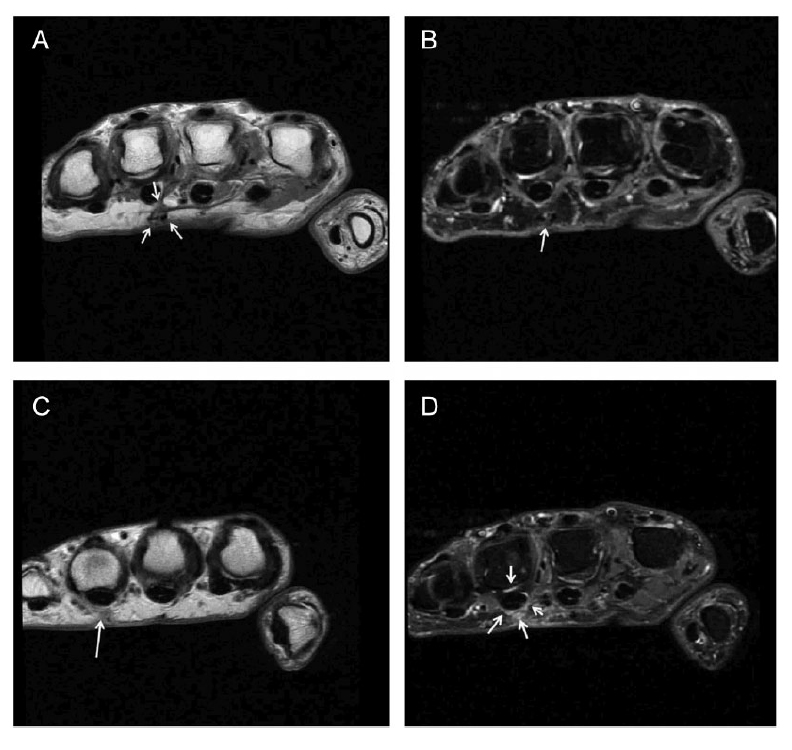 Several treatment modalities for severe Dupuytren’s contracture are available.  Injection of the collagen-digesting enzyme Clostridium histolyticum (Auxilium Pharmaceuticals, Inc., Malvern, PA, USA) directly into the Dupuytren’s cord has increasing gained interest as an attractive treatment option because of the risks associated with surgery.  This collagenase enzyme cleaves collagen molecules before the lysed fragments are further broken down by local protein-digesting enzymes. The affected fingers are then moved gently 24-hours after injection to break apart the weakened cord and restore normal appearance and function.  Whether collagenase weakens the Dupuytren’s cord to cause direct rupture at the injected site or local enzymatic activity digests the cord enough to cause a reduction in volume is uncertain.

We conducted a pilot study consisting of 5 male patients age 59 to 72 (68 years old on average) who presented with isolated contractures of 25° or greater at the metacarpophalangeal joint of the ring or middle finger. We compared measurements of joint contracture, as well as Dupuytren’s cord volume and signal intensity recorded on MRI, taken before injection and on average 39 days (range, 34-55) after injection.  In all patients, the Dupuytren’s cord ruptured. Cord volume decreased 72% on MRI, while signal intensity increased 320%. At final follow-up 3 years after injection, 4 of 5 patients had no evidence of recurrence.

Our study helps better define the mechanism by which collagenase injection corrects Dupuytren’s contracture. The reduction in cord volume seen suggests that collagenase injection not only facilitates rupture of the Dupuytren’s cord at a single defined region, but also causes chemical dissolution and breakdown of the cord along its entire length. Increases in signal intensity support these speculations, giving evidence of increased water mobility as would be expected with collagen breakdown.

Recognizing how collagenase works is important to better understand its effect on the injected cord and on local soft tissues. While authors of previous studies have proposed that enzymatic activity may spread to and affect nearby flexor tendons and pulleys in the hand, we observed no signs of tendon injury or loss of finger motion on clinical exam in our patients, with minimal increases in signal intensity around the tendons to signify chemical breakdown. Due to our study’s small sample size and limited follow-up, we cannot say whether the local tissue dissolution caused by collagenase injection will result in lower incidences of Dupuytren’s recurrence.  Larger studies would be needed to address these concerns. However, given the favorable results seen with collagenase injection when compared to traditional surgical correction and the safety to local tissues evidenced by this study, we endorse collagenase injection as a preferable treatment option for patients with Dupuytren’s disease.