You may have heard about “The brain in a vat”, the philosophical scenario which talks about simulated reality and conceptions. It may sound bizarre and unrealistic. However, larval fruit fly neuroscientists literally perform the experiment to understand how neural circuits work.

The larval fruit fly (Drosophila melanogaster) is a powerful model organism for studies of neural circuits since their central nervous system (CNS) is relatively simple (containing ~10,000 neurons) and amenable to various genetic manipulations. The activity of neurons can be monitored by a fluorescent protein called GCaMP that emits fluorescence when a neuron is active. Advanced genetic techniques allowed us to express GCaMP in a small number of neurons. We then used fluorescence microscopy to observe the activity of specific neurons (Fig. 1a). When properly handled, the activity of the CNS can last for tens of minutes in a solution even when it is isolated from its body. Such preparation is useful for studying spontaneous neural activities that occur in the absence of the body and reflect movements of the animal (called fictive locomotion). We thus used this preparation to observe the neuronal activities that correspond to various larval behaviors including forward/backward crawling and turning. 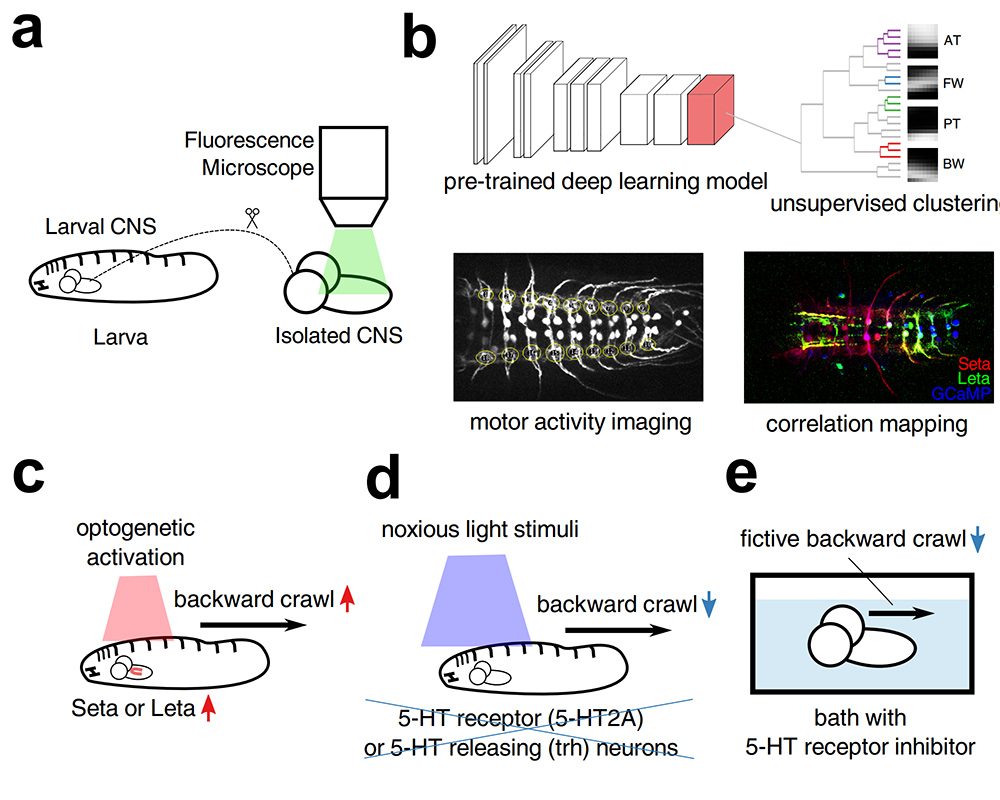 Many animal behaviors are rhythmical, as you see in human walking and fish swimming. Rhythmic motor outputs are known to be generated by neural circuits called central pattern generators (CPGs). However, the principles of CPGs are poorly understood at the cellular level. The first step for understanding CPGs is to identify neurons related to CPGs and study their functions. To identify CPG-related neurons in the larvae, we tried to classify rhythmic activities that occur in the isolated CNS in a data-driven manner. We applied a machine-learning algorithm (called a pre-trained deep learning model) and statistical data analysis (called an unsupervised clustering algorithm) to develop a new computational method for classifying motor activity patterns (Fig. 1b). Using this method, we found two neurons, termed Seta and Leta, show activities related to backward crawling (BW).

Next, we asked whether these neurons actually play roles in the animal’s backward crawling. We used a method called optogenetics, which utilizes light to control the activity of neurons, to reveal the function of these neurons. When Seta or Leta was optogenetically activated, the number of backward crawling increased significantly (Fig. 1c), suggesting that these neurons are part of CPGs related to backward crawling. Seta and Leta neurons express a receptor (called 5-HT2A) for serotonin, a well-known neurotransmitter. We therefore sought the relationship between serotonin signaling and backward crawling. We stimulated larvae by noxious light to induce backward crawling while we inhibited 5-HT2A-expressing neurons (including Seta and Leta) or serotonin-expressing neurons (Fig. 1d), and found that the number of backward waves is decreased significantly. Similar results were obtained when we inhibited 5-HT2A receptors using a selective inhibitor (Ketanserin) (Fig. 1e). Taken together, our study, starting from observing neural activities in an isolated CNS, reveals that serotonin may modulate larval backward crawling via the 5-HT2A receptor on Seta and Leta neurons.