Understanding the rare disease alkaptonuria: the role of oxidative stress, inflammation and amyloidosis

Alkaptonuria (AKU) is an ultra-rare disease that was recognized among the first inborn errors of metabolism. In AKU, an altered activity of the enzyme homogentisate 1,2-dioxygenase (HGD) occurring upon gene mutation lead to a defective metabolism of the aromatic amino acids Tyrosine and Phenylalanine. Such a defect causes the accumulation of a metabolite, namely homogentisic acid (HGA), in body fluids. It is known that HGA can undergo spontaneous oxidation into a benzoquinone acetate (BQA) compound, followed by polymerization (through still unknown mechanisms) into brown-black (ochronotic) pigments.

AKU manifests through a characteristic temporally related triad of symptoms due to the presence of HGA, such as:

Similarly to many other rare conditions, however, the paucity of cases and difficulties in collecting and studying patients’ samples hindered the clarification of the molecular mechanisms of AKU. To overcome this problem, we established a range of human serum-, cell- and tissue- based human models to reproduce and analyse under controlled laboratory conditions the effects of HGA and BQA. These models revealed unequivocally that HGA and BQA toxicity was mediated by oxidative stress, inflammation and amyloidosis. 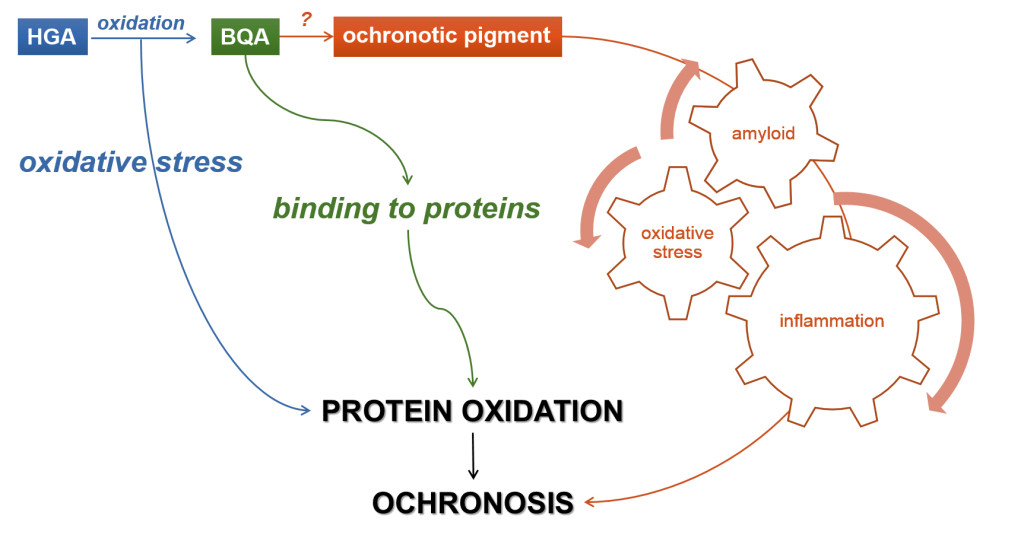 Oxidative stress in AKU
Protein carbonyls are considered major hallmarks of oxidative stress. We showed that HGA can increase protein carbonyls in a chondrocytic cell line in vitro, and found that oxidation was mainly directed towards proteins with structural functions, involved in protein folding, and proteins of the stress response. Chondrocytes from AKU donors showed a similar pattern of oxidation. Analogously, human serum showed an increased protein carbonylation on in vitro treatment with HGA, a phenomenon that could be partially counteracted by common anti-oxidant molecules. The HGA-induced oxidation of serum proteins was more relevant for albumin, haptoglobin, ceruloplasmin, and transferrin, considered as major contributors to the redox-balance of blood. When challenged with HGA, human serum showed also an increased protein thiol-oxidation.

The analysis of protein repertoires in our AKU models revealed that HGA could significantly alter the abundance of specific proteins involved in the oxidative stress response, ultimately pointing out that such an alteration, coupled with protein oxidation, may lay the basis in vivo for protein aggregation and production of ochronotic pigment.

Inflammation in AKU
Human chondrocytes treated in vitro with HGA and chondrocytes from AKU donors showed clues of lipid peroxidation, inflammation and release of pro-inflammatory cytokines. The same could be observed for cardiac valves from AKU patients, where oxidized lipids were present in co-localization with the alkaptonuric ochronotic pigment. Oxidized lipids are cytotoxic and known to attract inflammatory cells. This finding suggested a strict correlation between cytotoxicity of ochronotic pigment and inflammation.

Amyloidosis in AKU
The term “amyloid” refers to insoluble fibrous protein aggregates commonly found in some degenerative diseases. Oxidative stress, together with chronic inflammation, plays a central role for amyloid fibril formation and deposition. Our in vitro and ex vivo AKU models highlighted the amyloid nature of the HGA-related ochronotic pigment and allowed the classification of AKU as a secondary, reactive amyloidosis due to deposition of serum amyloid A (SAA).

Concluding, our studies in AKU models suggested that a vicious cycle could be generated in AKU (Fig. 1): HGA, through generation of oxidative stress and inflammation, can promote degeneration of joints. In parallel, an impaired anti-oxidant machinery can promote the aberrant production of proteins ultimately leading to secondary amyloidosis. Amyloid itself may be cytotoxic and function as a scaffold for the production of ochronotic pigment. This is an example on how establishing models to study a rare disease such as AKU might shed light onto its molecular mechanisms, helping to setting up a dedicated cure.