A natural protective immunity against a disease usually anticipates the successful development of preventive vaccines; as shown by the infectious diseases and lately cancer vaccines. Currently available information shows that the immune system is since an early age, searching and removing normal proteins that become aberrant and toxic, as β-amyloid, causing disorders like Alzheimer’s disease (AD). That this protective immunity declines with age when AD appears, may explain this disease prevalence in the aging population; indeed, AD like cancer are diseases of the elderly. Hence, vaccines that boost and prolong that natural protective immunity must prevent and/or delay the onset of AD; however, for the past twenty years, all efforts to develop β-amyloid based vaccines have ended in failures. 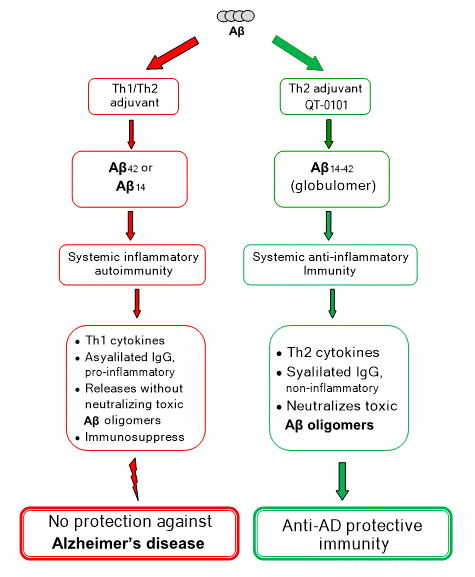 Fig. 1. Comparison of the AD vaccine formulations and immune responses induced by the past (red) and proposed optimized preventive Aβ vaccine (green). Notice the differences in adjuvants and immunogens.

Consequently, it has been assumed that these disappointments were the result of inherent deficiencies in the proposed role of β-amyloid in AD. An opinion that have fostered the tacit disregard of the vaccine approach, despite the evidence of natural protective anti-AD immunity. An immunity unequivocally proven by the isolation from older but cognitively normal people of aducanumab, an anti-β-amyloid antibody that when administer to early AD patients, reduces the decline in cognitive functions. The question then is why AD vaccines have yielded only failures? An explanation may be found in both the vaccines and the transgenic mouse models used to evaluate them. Effective vaccines should mimic the natural protective immunity rather than replace it, because some changes can worsen the disease; a rule that has been ignored in this vaccine development. Indeed, many AD vaccines had adjuvants that induced a strongly inflammatory immunity, despite that inflammation aggravates AD. However, vaccines using alum to induce an anti-inflammatory response, evidently overlooked the fact that alum is quite ineffective in the elderly, this vaccine’s target population.

Another negative factor is that these vaccines’ β-amyloid derived immunogens lack the critical conformational epitope characteristic of pathogenic aggregates. Hence, these vaccines could not induce a protective immunity and most likely elicited a damaging immunoresponse. Also, apparently unbeknown to the developers, some AD vaccines had antigenic constructs that cause immunosuppression. Therefore, rejecting the AD vaccines because defective formulations failed to induce protection, would unnecessarily delay the development of this critically needed vaccine. A grim prospect, considering the anticipated large increase in AD cases in the developing countries from Asia and Latin America.

Examination of AD vaccines’ development indicates that they are better suited for transgenic mice than humans; the result of using these artificial animal models to assess these vaccines’ efficacy. In transgenic mouse models the disease is caused by β-amyloid changes leading to plaque formation; while in humans there are many other factors and plaque may actually have a protective role against AD. Hence, new strategies mimicking the natural protective immunity are needed; that would require adjuvants that induce an anti-inflammatory immunity while ameliorating the immune decline associated with aging. Furthermore, the β-amyloid immunogen would need to have that critical conformational epitope characteristic of toxic aggregates, while avoiding the induction of a damaging immunoresponse; conditions that are fulfilled by a class of immunogens known as globulomers. A unique anti-inflammatory Th2 adjuvant is QT-0101, which may ameliorate the age-linked immunodecline caused by the loss of ligands and receptors from dendritic and T cells. Indeed, QT-0101 acts on dendritic cells, biasing immunity towards Th2 but without inhibiting Th1 immunity, needed for protection against pathogens. Also, preclinical evaluation of AD vaccines should be done in animal models that similar to humans, develop with age AD-like conditions. Thus, it is possible to conclude that rationally designed vaccines would induce the immunoresponse required to curb the current AD epidemic.