Unity is strength in the world of microscopic intermolecular connections

‘Unity is strength’ is one of the most overused motto in human societies, which found a plethora of validations since the ancient Greeks, via the French revolution, and up to the modern period. It is a common and well-accepted thinking that several persons sharing the same advice, or the same project globally got an output, which is stronger than the simple sum of their individual pertinences. This human feeling met some resonance in Sciences when the correlations between energy and matter were investigated during the second part of the 19th century, a topic named thermodynamics. In this context, biologists were particularly eager to exploit these achievements for rationalizing the successive fixations of several guests to a multi-site receptor, a phenomenon which is at the origin of the transport of vital dioxygen by hemoglobin. They indeed discovered that the connection of one dioxygen molecule per binding site (i.e. per heme) in hemoglobin, which contains a total number of four hemes, deviate from a simple statistical scheme. Each binding event energetically ‘encourages’ the fixation of the forthcoming guest, a phenomenon often referred to as positive cooperativity. 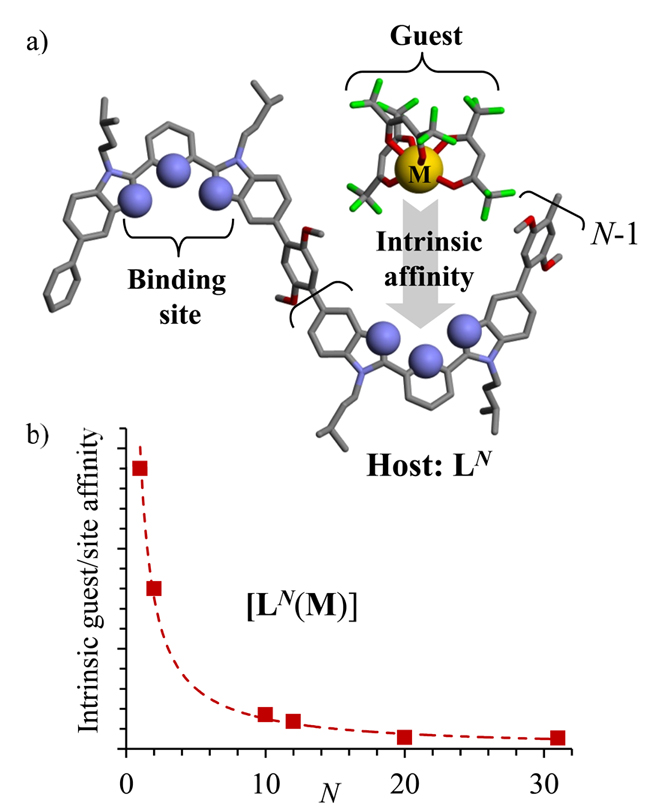 Fig. 1. Host-guest interaction leading to the adduct [LN(M)] and b) expoential decrease of the intrinsic affinity as a function of the length of the host receptor (M = Yttrium in dichloromethane)

Upon looking for its origin in hemoglobin, the famous chemist Linus Pauling (awarded by two Nobel prizes in 1954 and 1962) mentioned in 1935 that, for judiciously estimating cooperativity in multi-site hosts, two crucial parameters should be at hand: 1) a precise affinity for each individual site taken separately and 2) a precise topology for the different binding sites in the receptor. Whereas the second point was the crucible for huge efforts in getting ultra-detailed modeling of structure-dependent inter-guest cooperativities for almost half a century, the first statement was essentially discarded. In our contribution, we tried to return to Pauling’s initial remark and considered a simple rigid and linear molecular host LN, in which the number of binding sites can be easily varied from N = 1 (a host with a single site is called a monomer) to N = 30 (a polymer, Fig. 1a). By running titrations and calculating concentrations of the different species involved, we were able to precisely estimate the intrinsic affinity of an isolated binding site for a metallic guest M in the adducts [LN(M)m], and this whatever the possible cooperativity operating between the m guests. In line with Pauling’s warning and intuition, we observed that the intrinsic affinity of one given binding site varies as a function of the length of the polymer (Fig. 1b), and this without any need for considering inter-guests interactions or local organizations. The negative exponential dependence (Fig. 1b) implies that the eagerness of the same binding site for the entering metal abruptly decreases in going from the monomer (N = 1) to the polymers (N > 2). This result casts doubt on a common procedure used in biology and medicine, which uses the affinity of the monomer as a reference for extracting the cooperativity factor experienced in multi-site receptors. The origin of this surprising effect can be traced back to the energy released by the organization of the solvent molecules around each inividual site, which stepwise decreases as the length of the polymer LN increases. Having now the possibility to model and, thus, to predict the intrinsic affinity of one binding site in multi-site receptors, Pauling’s first requirement is fulfilled, and recurrent mind-blowing claims for remarkable allosteric cooperativity operating in biology, in material sciences and in supramolecular chemistry could be critically re-assessed.