The chemical effects of ultrasound, named sonochemistry, are known since 1927.  Today, there is a consensus within the scientific community that sonochemistry arises from the violent collapse of microbubbles formed in liquids submitted to power ultrasonic waves. Nonetheless, the origin of the drastic conditions produced inside the collapsing bubbles is still under discussion. The mainstream concept of sonochemistry is based on quasi-adiabatic heating of the gas inside the collapsing bubble leading to homolytic rupture of the chemical bonds. However, recent spectroscopic studies of light emitted during bubble implosion, known as sonoluminescence, revealed formation of a nonequilibrium plasma inside the bubble instead of simply hot gas. In such kind of plasmas, the electron temperature (Te) exceeds the vibrational (Tv) and rotational (Tr) temperatures: Te>Tv>Tr»Tg, where the gas temperature (Tg) is usually considered to be equal to Tr. Existing models based on the quasi-adiabatic heating mechanism cannot explain these observations. The purpose of this work was to better characterize the formed plasma using sonoluminescence of OH● and NH● radicals produced during the sonolysis of aqueous ammonia solutions in the presence of noble gases. 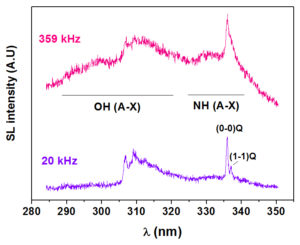 The sonoluminescence spectra of argon-saturated 0.1M NH3×H2O solution shown in Figure 1 exhibit OH(A2Σ+-X2Π) and NH(A3P-X3S–) emission bands on top of a broad continuum. For both spectroscopic systems, an increase in ultrasonic frequency results in significant differences in the shape of the emission spectra. Rovibronic temperatures (Tv and Tr) of both NH(A3P) and OH(A2Σ+) radicals calculated as a function of ultrasonic frequency (Tab. 1) point out the absence of thermal equilibrium (Tv>Tr). What is more, vibrational excitation increases with frequency.

The sonoluminescence spectra of aqueous ammonia solutions saturated with Xe unequivocally indicate stronger vibrational excitation of OH(A2Σ+) and NH(A3P) states and higher yield of OH(C2Σ+) state than in the presence of Ar. In terms of nonequilibrium plasma model this is the result of the lower ionization potential of Xe compared to Ar. A lower ionization potential provides a plasma with higher electron density and, consequently, higher vibrational temperature of radicals.

Monitoring of the sonochemical activity during sonication of ammonia solutions revealed the formation of H2 and N2H4 as principal products while no H2O2 accumulates in these conditions. In the presence of Xe, NO is also formed as sonolysis product. The appearance of new possible reaction pathways under Xe is made possible by the higher plasma electron density and correlates with sonoluminescence data.

The finding of nonequilibrium plasma formation during acoustic cavitation represents a paradigm shift for sonochemistry. Thus, the sonochemical processes should be considered combining the usual quasi-adiabatic heating model and a more sophisticated plasma chemical approach. Obviously, the average gas temperature around 5000 K usually reported to interpret the sonochemical activity presuming thermal equilibrium inside the bubble cannot describe a plasma far from equilibrium. The mechanism of sonochemical reactions should be considered taking into account multiple different temperatures related to different plasma particles and different degrees of freedom.