Mechanosensitive Piezo channels are large membrane proteins present at the cell membrane of eukaryotic cells. These channels open in response to the presence of mechanical forces such as frictions that occur when extracellular fluids flow against the cell surface or when the cell membrane is stretched or indented. In mammals, two genes encoding Piezo channels have been identified and their protein products are named Piezo1 and Piezo2. Both channels contribute to important biological functions such as helping blood vessels to sense blood pressure and blood flow or enabling sensory neurons to sense mechanical stimuli and provide us with the sense of touch. 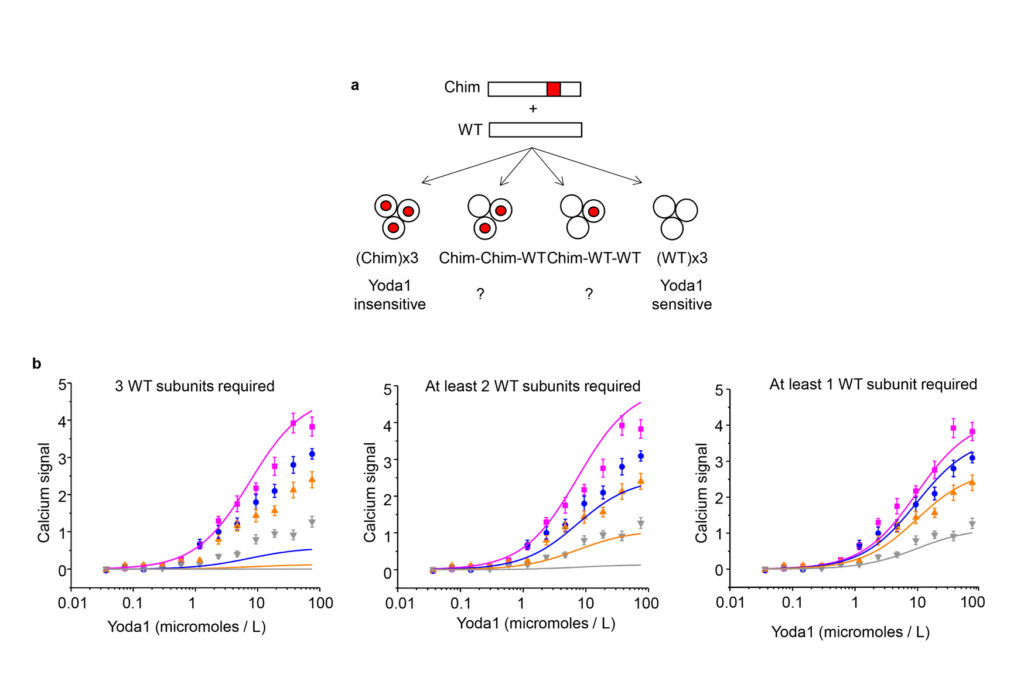 Fig. 1. (a) How many Yoda1-sensitive subunits per trimeric channels are needed to enable chemical activation by Yoda1? To answer this, here we ask whether hybrid channels containing one or two chimera subunits are Yoda1-sensitive (Chim: chimera; WT: wild-type).
(b) Comparison of observed Yoda1-mediated channel activation measured as relative increase of calcium concentration (calcium signal) with predicted responses obtained by postulating all subunits must be WT (left), at least 2 subunits must be WT (middle) or at least one subunit must be WT (right). The plots represent experimental data and the lines represent the mathematical model. The different colors represent different tested Chim:WT ratios (0:1, magenta; 1:1, blue; 7:3, orange and 9:1, grey). Only the last scenario agrees with our experimental results.

Piezo proteins are homotrimeric, i.e. they are formed by the association of three identical subunits, or monomers. The assembly of the three Piezo subunits produces a triskelion-like structure with a central region containing the pore, i.e. the permeation pathway that allows positively charged ion to flow across the membrane when the channel gate opens. In contrast, the three peripheral regions resemble the blades of a propeller and are thought to act as force-sensor: when the membrane is mechanically stimulated, these blades are postulated to rearrange in such a way as to induce or promote the opening of the gate.

Besides force, Piezo1 can be chemically activated by a small molecule called Yoda1. In the presence of Yoda1, the mechanical threshold required to open the gate becomes so low that the pore spontaneously opens in absence of external mechanical stimuli. Here, we used Yoda1 to dissect the mechanism by which the subunits work to open the channel gate. To this aim, we first genetically manipulated the Piezo1 subunit in order to abolish the effects of Yoda1. This was done by exchanging protein regions between Piezo1 and its sister protein Piezo2 which is not sensitive to Yoda1. Using this approach, we created a Yoda1-insensitive Piezo1 variant (or chimera), harboring a small region derived from Piezo2.

Interestingly, this region is located in the blades, relatively far from the central region containing the pore, suggesting up to three Yoda1 molecules could interact with a single homotrimeric Piezo1 channel. If that is the case, how many Yoda1 molecules must interact with the channel to open its pore? This question is equivalent to asking: how many Yoda1-sensitive subunits per trimeric channel are needed to enable chemical activation by Yoda1? While it is quite difficult to address the first one directly, our newly discovered chimera provided us with a tool uniquely shaped to address the second one.

We randomly mixed native (wild-type, or WT) Piezo1 subunits with chimera subunits and assessed the Yoda1-sensitivity of the hybrid channels containing WT and chimera subunits. This was done by measuring the relative increase in the concentration of calcium ions entering the cells through the open Piezo1 channels. We first performed a series of experimental controls to verify that the ratio of WT vs. chimera subunits was proportional to the ratio of transfected plasmids encoding the two subunits. We next derived a mathematical model relating the observed change in calcium concentration with the known Yoda1 concentrations and the predicted fraction of hybrid channels which remain Yoda1-sensitive. Three possible predictions were tested: all three subunits (1), at least two subunits (2) or at least one subunit (3) must be Yoda1-sensitive to confer sensitivity to the hybrid channel. Our results conclusively showed that a single Yoda1-sensitive subunit per trimeric channel is sufficient for chemical activation by Yoda1.

This work paves the way to understand how this important family of mechanosensitive proteins work on the molecular scale and sheds light on the mechanism by which they can be regulated by exogenous small molecules.