Molecules of benzoic acid form dimers in the crystal, which is doubly hydrogen bonded through the carboxylic COOH groups (Fig. 1.). Since the left and right site of the dimer are fully equivalent, the protons “do not know where they should belong”. Therefore, concerted double proton jumps within the hydrogen bonds from one oxygen atom to another can occur without changing of the total energy of the dimers. This leads to two tautomers, left (L) and right (R) (Fig. 1.), which are also equivalent.

Fig. 1. The two tautomeric forms of the benzoic acid molecules labelled L and R, and schematic representation of the asymmetric double minimum potential. The asymmetry arises at low temperature due to the crystal field.

The to-and-fro proton transfer is known as protonic tautomerism. Upon cooling down to low temperature the protonic transfers stop due to a weak energy asymmetry of L and R tautomers in the crystal. Where, then, the protons of the hydrogen bonds should be located at low temperatures? It was to be expected that they would locate at the midpoints between the oxygen atoms causing a creation of symmetric hydrogen bond. The symmetric hydrogen bonds have been attracting attention for a long time, because strongest hydrogen bonding should arise in the case, but there were no reliable reports on the symmetric hydrogen bonds in the literature. However, benzoic acid permits to observe the appearance of a symmetric H-bond, albite in a rather intricate form. At low temperatures (below 60 K), when all equilibrium vibrations are frozen out and oxygen-oxygen distance is the shortest for a given compound, nonequilibrium vibrations arise in the course of the Raman scattering. (The Raman spectroscopy is a physical method, which permits to excite and observe a vibrational spectrum of chemical compounds). The excited vibrations modulate inter-atomic distances in the molecule, including O…O distance, and provoke its further shortening at least for the time of half the period of the molecule vibration. This short-time getting close of the oxygen atoms is however enough to change significantly the potential well of the proton participating in the hydrogen bond. This means that the proton vibration couples strongly to those intramolecular modes which modulate O…O distance. Due to the coupling the spectrum of the combined modes, that is modes, which are the sum of O-H and intramolecular vibrations, appears in the high-wavenumber region at low temperature. 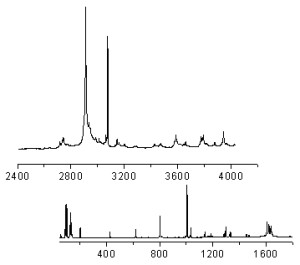 This unusual behavior of high wavenumber spectra is not a unique property of benzoic acid. A similar feature was observed in Raman spectra of orthorhombic modification of paracetamol. One can also expect similar phenomenon in biological systems, e.g. in complementary pair guanine – cytosine.