The messenger RNA (mRNA) translation process is a key step of gene expression, whose regulation allows the cell to rapidly change protein synthesis in a spatio-temporal manner in response to different stimuli. Translation comprises four steps – initiation, elongation, termination, and ribosome recycling – being initiation the rate-limiting step that is, therefore, prone to a tighter regulation. Among the regulatory elements and factors that can act in this stage, there are the upstream open reading frames (uORFs), which represent coding regions defined by an initiation codon in the 5’ leader sequence [also known as 5’ untranslated region (UTR)] of the mRNAs, in frame with an upstream termination codon or overlapped with the main open reading frame (mORF) that encodes the protein. These cis-acting elements are typically considered to be repressors of downstream translation in basal conditions since they may function as “barriers” to ribosomes, impeding them to reach the mORF. 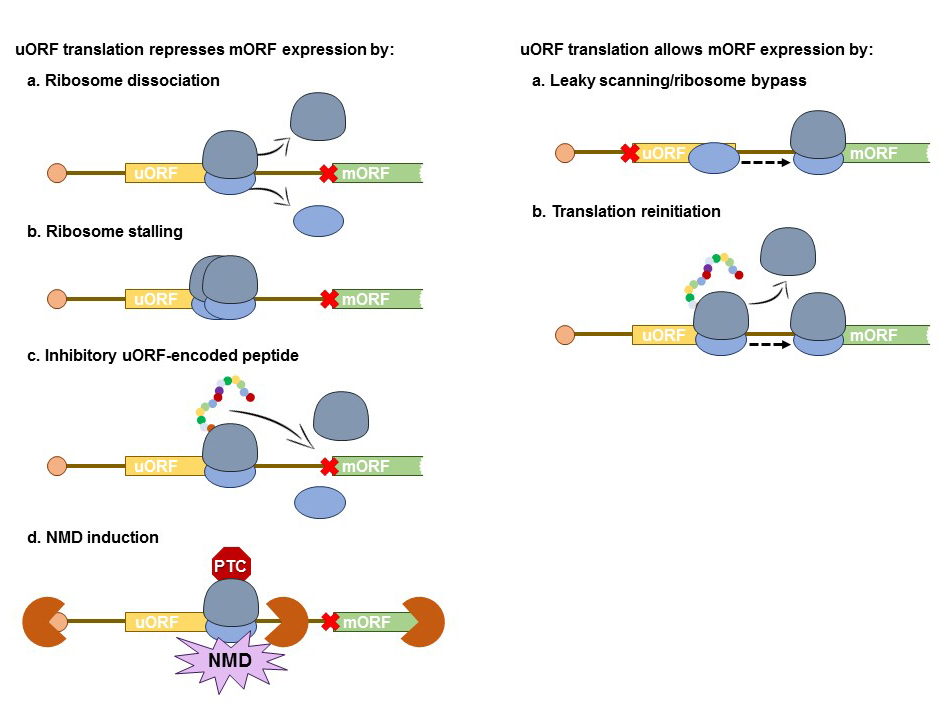 This can be achieved by: i) ribosome dissociation or stalling when the uORF is translated, ii) production of a uORF-encoded peptide that interferes with the translation machinery, or iii) induction of the nonsense-mediated mRNA decay pathway (NMD) in case the uORF stop codon is recognized as premature during the step of translation termination. During stress conditions, however, specific kinases phosphorylate the eukaryotic initiation factor 2α (eIF2α), which favours the non-recognition of initiation codons of some uORFs (leaky scanning or ribosome bypass), or the occurrence of translation reinitiation at the mORF after translation of the uORF, contributing, in these cases, for mORF expression.

In the last few years, the development of ribosome profiling, a technique that provides a “snapshot” of ribosomal positions within an mRNA, has revealed that uORFs are conspicuously present throughout the human transcriptome and unveiled a high prevalence of non-AUG-initiated uORFs. These findings, together, indicate that the human translatome is more complex and diverse than originally thought, and suggest that uORFs are important key elements of gene expression control. Indeed, uORFs are highly present in certain classes of genes, including transcription factors, cellular receptors, oncogenes, stress-responsive genes, and others involved in cell growth and differentiation control, thus, regulating several cellular functions. In line with this, there is an increasing list of genetic diseases in which mutations that create, disrupt, or modify an uORF have been implicated. This includes metabolic, hematologic, and neurologic disorders, inherited syndromes, and cancer, in which a dysregulated uORF-mediated mechanism results in unbalanced expression of a specific protein, leading to disease. For instance, it was reported that the single nucleotide variant, c.-263C>A, in the twist-related protein 1 (TWIST1) gene creates an uORF that represses mORF translation. Consequently, TWIST1 is poorly expressed, leading to a malformation of the skull, characteristic of the Saethre-Chotzen syndrome (SCS). This is only one simple example of an endless list of diseases in which uORFs seem to be involved, and it is possible that many more will emerge in the following years.

Despite the clear notion that uORFs are important regulators of translation, and therefore, of gene expression, the screening of 5’UTRs is still not routinely performed in a clinical context. In the near future, it would be pertinent to pay more attention to genetic variants that affect uORFs and study their (patho)physiological consequences in order to improve disease diagnosis and therapy.