Rabbit ear wound repair is an accepted model for studies of tissue regeneration, leading to scar less wound repair. It is believed that a specific tissue, blastema, is responsible for such interesting capacity of tissue regeneration. To test this idea further and to elucidate the cellular events happening during the ear wound repair, we designed some controlled experiments in vitro. Small pieces of the ear were punched and washed immediately with normal saline. The tissues were then cultured in the Dulbecco’s Modified Eagle‘s Medium, supplemented with fetal bovine serum in control group. 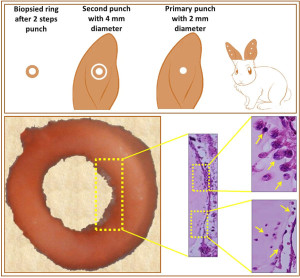 As a treatment vitamin A and C was used to evaluate the differentiation potency of the tissue. These tissues were fixed, sectioned, stained and microscopically studied. Micrographs of electron microscopy provided evidences revealing dedifferentiation of certain cells inside the punched tissues after incubation in tissue culture medium. The histological studies revealed that cells of the tissue i) can undergo cellular proliferation, ii) differentiate to epithelial, condrogenic and osteogenic tissues, and iii) regenerate the wounds. These results could be used for interpretation of the possible events happening during tissue engineering and wound repair in vitro. An important goal of this study is to create a tissue engineering and tissue banking model, so that in the future it could be used in further blastema tissue studies at different levels.