Many pure elements and complex compounds become superconducting when their electrical resistance drops to zero below critical temperature, Tc. For more than a century, the race for higher Tc remains one of the most exciting topics in materials science. The noble goal is to achieve practical applications at temperatures of renewable and cheap cooling, such as liquid nitrogen or the outer space. Understanding how microscopic properties determine the value of Tc is the greatest challenge. 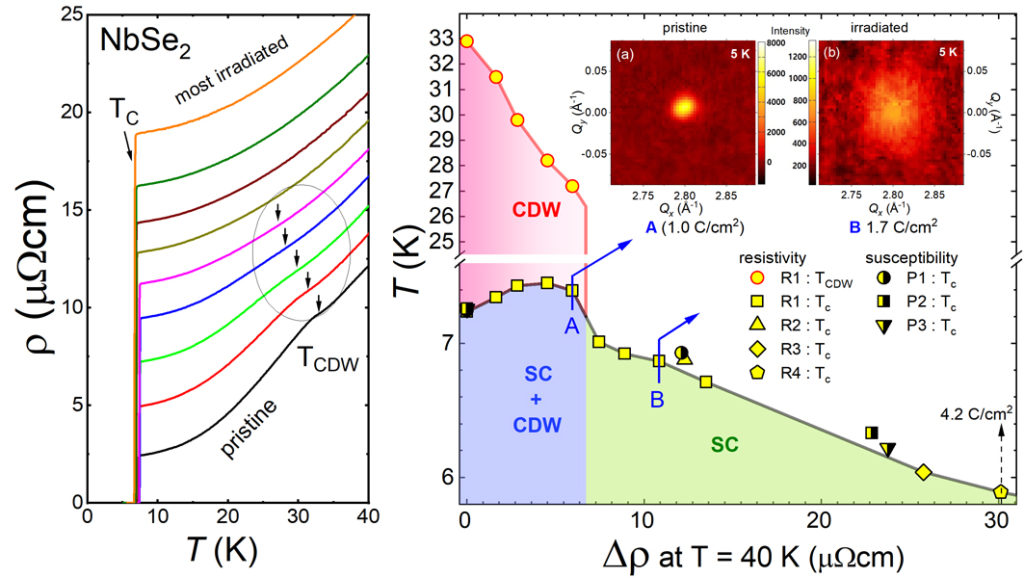 Fig. 1. (left panel) Temperature – dependent resistivity for different levels of electron irradiation. Arrows mark TCDW and the steps occur at Tc. (light panel) Transition temperatures as a function of the induced change of the residual resistivity revealing the complex interplay between charge-density wave and superconductivity.

In a superconductor (SC), electrons bind together in so-called Cooper pairs that form macroscopic quantum-mechanical superfluid flowing without resistance. The energy required to break such pair is proportional to Tc and, so the nature of this pairing potential is what scientists try to determine. Electron-electron interaction may be mediated by different excitations. In elemental metals, virtual phonons provide such mechanism and Tc is limited by 30 K or so. However, the same phonons may even lead to room-temperature superconductivity in hypothetical metallic hydrogen. Can we control these phonons and, therefore how they affect superconductivity? In complex materials other electronic quantum phases can coexist with superconductivity exhibiting periodic spatial modulations of the magnetization (spin-density wave, SDW) or charge (charge-density wave, CDW). These orders compete for the same conduction electrons as superconductivity.

The material of this work, NbSe2, is a well-known superconductor in which CDW (TCDW = 33 K) coexists with superconductivity (Tc = 7.2 K). To understand their interplay a tuning parameter that affects them both is needed. One such parameter is hydrostatic pressure that leads to a dome-like variation of Tc and a suppression of TCDW. Pressure, however, alters electronic bandstructure making the relation between superconductivity and CDW more complicated.

We used another approach that does not alter the material. We bombarded the crystal with relativistic electrons to induce point-like defects (vacancies and interstitials). Since both CDW and superconductivity are itinerant in nature, electron scattering on defects affects both. A single crystal was measured, then irradiated, measured again etc. In Figure 1 (left panel), CDW shows up as a bump on the resistivity vs. temperature curves and Tc corresponds to a step-wise drop of the resistivity to zero.

Repeating measure/irradiate sequence multiple times, we obtained the dependences of Tc and TCDW on the cumulative irradiation dose. More physically, the amount of induced disorder was quantified via the resistivity just above Tc. The results are shown on the right panel of Figure 1. We also measured London penetration depth to probe the superconducting state and X-ray diffraction to probe CDW long-range order and the results are discussed in our published manuscript. Inset in Figure 1 shows X-ray evidence for the destruction of CDW.

Figure 1 reveals complex interplay of CDW and superconductivity. Unlike the pressure studies where maximum Tc was shifted well above the disappearance of the CDW, here we find a clear indication that, initially, CDW assists superconductivity (most likely by softening the phonons, hence enhancing electron-electron attraction). Upon further increase of disorder, long-range ordered CDW disappears abruptly whence Tc drops as well providing direct evidence for their cooperation.

While the transition temperature of our work is modest, the principally important observation is that it is possible to manipulate one quantum ordered state by tuning another with an appropriate tuning parameter. For example, as a futuristic fantasy, a charge density wave can be engineered in an artificial quantum electronic metamaterial to control superconducting phase, for example, by the applied stress.

Our research is a step in that direction.