Intracellular membrane trafficking is a crucial, bi-directional process that occurs in every eukaryotic cell. This process is similar to a cellular mailing system in that it processes, packages, and ‘ships’ things to their correct location. Membrane trafficking is responsible for sorting and modifying of a significant portion of proteins and lipids made in the cell. Cells use these modified proteins and lipids for a variety of functions, similar to how you can receive a package in the mail for almost any everyday need. In this cellular packaging and mailing system, the central organelle is the Golgi apparatus. The Golgi apparatus modifies proteins and lipids in a process called glycosylation. This process involves enzymes that add and remove different kinds of sugars until the correct (mature) sugar structure is acquired. The modifications made before Golgi exit are critical for proper structure, localization, and/or function of the protein or lipid. After modification, proteins and lipids are then sorted into vesicles and sent to their proper intra- or extracellular location. Glycosylation and the trafficking events associated with it are tightly regulated processes. When one or multiple steps occur out of place in humans, it results in a group of genetic diseases (called congenital disorders of glycosylation) that have severe symptoms, involving multiple organ systems. Sometimes these diseases affect the patient so severely that they succumb to the disease within the first year of life. 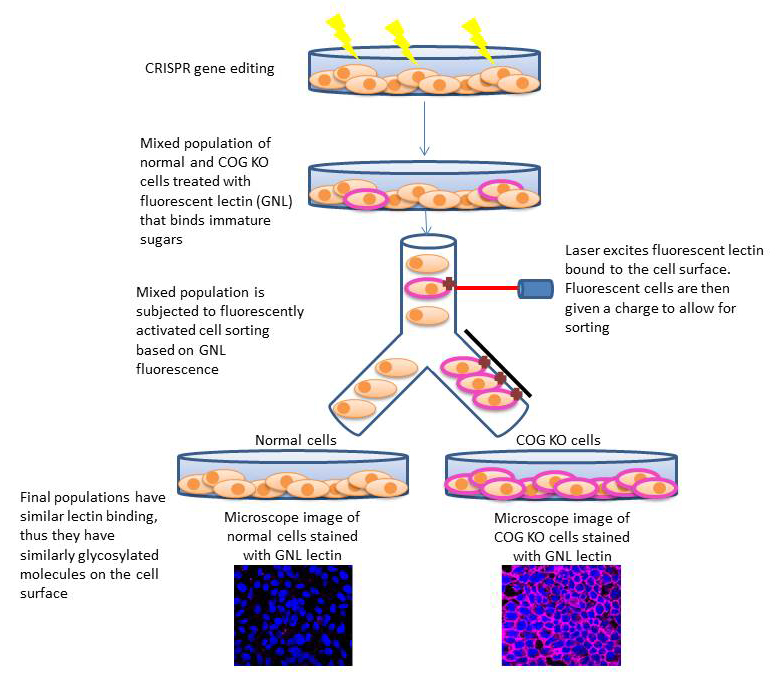 Fig. 1. The process of obtaining CRISPR created COG knockouts from a mixed population by using a fluorescently tagged lectin and cell sorting (GNL).

One of the key players in assuring that glycosylation enzymes are in the proper order to correctly modify proteins and lipids in the Golgi is the Conserved Oligomeric Golgi (COG) complex. This protein complex (comprised of 8 different proteins) is responsible not only for correct glycosylation enzyme localization, but also for Golgi structure integrity, though how it does this remains an enigma. In order to better understand the COG complexes’ function, we have removed it from cells using CRISPR-mediated gene editing. CRISPR editing causes the cell to ‘forget’ how to make the targeted protein. Cells that are missing the targeted protein are called knockout cells. CRISPR is an efficient gene editing tool, however, because COG function is so important to the cell very few cells in a CRISPR treated population become COG knockout cells. In order to find these COG knockout cells among the crowd of ‘normal’ cells we implemented a strategy that allows for the visualization of proteins and lipids that are incorrectly glycosylated on the cell surface using a specialized fluorescent protein (GNL lectin) that binds to immature sugars. Because glycosylation is tightly regulated these incorrectly modified proteins and lipids are mostly absent on the cell surface of normal cells causing them to have little fluorescence. In contrast, COG knockout cells are very fluorescent due to an abundance of incorrectly glycosylated proteins and lipids on the cell surface causing these cells to light up. The light that these mutant cells produce can then allow them to be sorted into COG KO populations efficiently (Fig. 1). Using this strategy we obtained knockout cells for each component of the COG complex and used these cells to assess the effect that long term lack of COG function has on the cell. Through our current analyses we have found that both trafficking and glycosylation are impaired when the COG complex is nonfunctional. In the future the cells crated by this method will also prove useful in understating how COG malfunction affects other parts of the cells and also allow for a more specific analysis of which proteins and lipids are most affected by the absence of the COG complex.