According to the Centers for Disease Control, a substantial portion of children—8.9% of two to five-year olds and 21.9% of six to 11 year-olds—can be categorized as obese. Given the adverse effects of pediatric obesity on dietary habits and health outcomes throughout the lifecycle, and the associated costs, encouraging better eating behaviors at a young age is particularly important. As such, a growing body of research seeks to examine the efficacy of various non-reward and reward-based interventions in school settings on encouraging healthy eating habits in children.

The former, which have been studied extensively, typically involve changes to school curricula, exposure to food preparation, or the alteration of the settings in which children consume their meals. Such interventions tend to be time-consuming, labor intensive, costly, and difficult to replicate on a large scale while inducing only small changes in eating behaviors. Reward-based interventions, on the other hand, involving small and cheap prizes have been shown to produce substantial changes in the choice and consumption of fruits and vegetables. However, while promising, little is known about how the introduction of reward-based incentives impact eating behaviors outside of experimental settings or their effectiveness over time when administered daily. Toossi (2017) seeks to shed some insights on both issues.

The paper presents the results of a month-long field experiment employing a removed-treatment design wherein children between the ages of 5 and 8 attending a summer program were offered a prize for choosing a fruit cup—the healthy option—for dessert after lunch instead of cookies—the unhealthy alternative. The 23 children who participated were predominantly low-income and black or Hispanic, populations of particular interest given their higher prevalence of obesity as compared to their white counterparts.

The study procedure is outlined in Figure 1. Children were offered fruits and cookies every weekday after lunch for four weeks, and their choice and consumption was recorded daily. Children’s dessert choices in the absence of prizes was recorded in the first week. This was followed by the introduction of prizes in the second and third weeks, after which they were removed and post-treatment observations were collected. The strength of this design is that it facilitates causal inferences and allows for the identification of any crowd out effects that the introduction of extrinsic incentives may have had on children’s intrinsic motivation for healthier eating.

As seen in Figure 2, the rewards were found to induce large increases in the number of children choosing the healthy dessert option after lunch, thereby corroborating existing studies. However, disaggregating the results by week and day suggests that their impact diminished over time. The children consumed all of their chosen dessert on each occasion and there was no evidence of any crowding out of intrinsic motivation as the same proportions of children chose fruits and cookies in the post-treatment phase as in the baseline period. Attempts to ascertain changes in eating behaviors outside of the experimental settings using parent surveys about their children’s dietary habits at home did not indicate that the introduction of rewards had any adverse ripple effects. 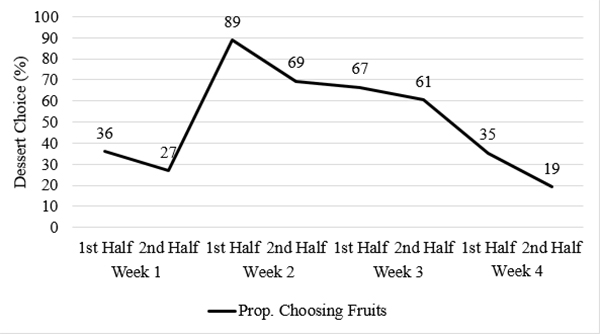 The implications of the finding are two-fold. First, while reward-based interventions do appear effective, their usefulness as a motivator may wane over time, perhaps as their novelty wears off. This could mean that any future intervention should only administer prizes intermittently or vary them over time at optimal intervals. Second, the absence of any adverse ripple effects suggests that changing eating behaviors in one setting with rewards may not change children’s expectations for the worse in others. Though illuminating, further studies are required to confirm and better understand these dynamics.

Incentivizing healthy eating in children: An investigation of the “ripple” and “temporal” effects of a reward-based intervention.
Toossi S
Appetite. 2017 Oct 1