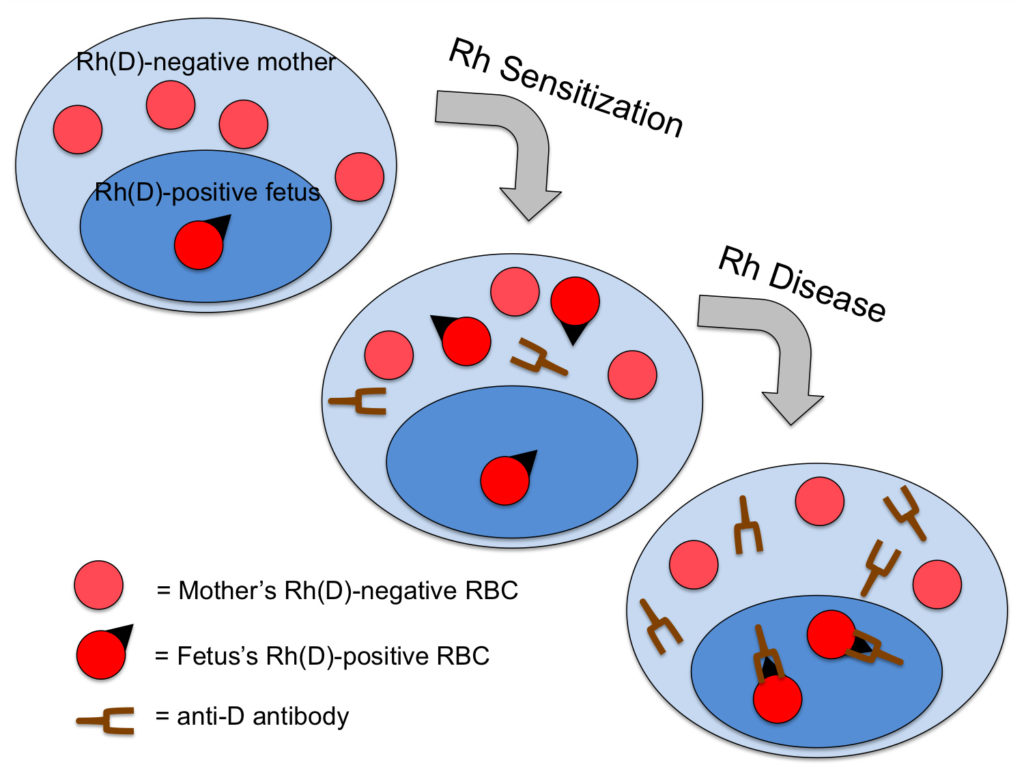 In order to prevent an Rh(D)-negative woman from being sensitized by an Rh(D)-positive fetus and thus preventing fetal Rh disease for subsequent pregnancies, an injection of Rh immunoglobulin (RhIG) is given to the woman during each pregnancy. RhIG is a human anti-D antibody and is made from donated blood and works as a vaccine. It targets fetus Rh(D)-positive red cells in the mother’s blood and prevents anti-D antibody formation. RhIG needs to be given to the Rh(D)-negative woman at around the 28th week of pregnancy, within 72 hours after the delivery of an Rh(D)-positive baby, and after a miscarriage, abortion, or any obstetric procedures during pregnancy. 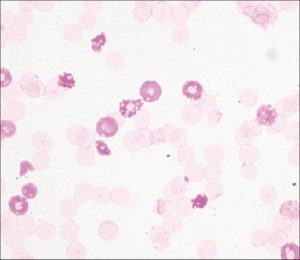 The amount of RhIG given is also important.  An insufficient dose of RhIG cannot destroy all Rh(D)-positive fetal RBCs to prevent Rh-sensitization of the mother. This failure is especially bad because once the woman forms her own anti-D antibodies, the RhIG shot is useless in protecting her sequential pregnancy of Rh(D)-positive babies. On the other hand, an overdose in RhIG will cause wastage and have possible side effects. The Rh-sensitization state and the appropriate dose of RhIG given can be evaluated and determined by laboratory testing. If an Rh(D)-negative woman has anti-D antibody present in her blood prior to pregnancy or prior to RhIG administration, likely the result of her sensitization from previous Rh(D) exposures owing to pregnancy or transfusion, then RhIG will not be given. Otherwise, per American College of Obstetrics & Gynecology guideline, a dose of 300 micrograms of RhIg will be given intramuscularly at the 28th week of pregnancy. This amount of RhIG should prevent the sensitization effect from 30mL of fetal Rh(D)-positive blood crossed into the placenta. When a mother’s exposure of over 30mL of fetal blood is expected, a special laboratory test such as a Kleihauer-Betke assay will be performed to determine the exact amount of fetal blood exposed (Fig. 2), so that sufficient RhIG can be given. In the Kleihauer-Betke assay, blood is drawn from the mother usually after delivery or a surgical procedure. A blood smear is prepared and the slide is treated with an acid solution. This removes mother’s adult RBCs, but not the fetal cells. Subsequent staining makes fetal cells appear a rose-pink color, while the adult RBCs appear “ghostlike”. Cells are counted under the microscope and a percentage of fetal to maternal cells is calculated, determining the dose of RhIG needed. Women who require multiple doses of RhIG should consult a specialist, such as pathologist, for evaluation of other conditions such as a disorder of hemoglobin synthesis, to determine the accuracy of the test.