Vaccine design in the OMICs Era

A retrospection into the field of vaccinology reveals the triumph of medical science over infectious diseases that were once a death sentence. Research on vaccines has come a long way since 1796 when Edward Jenner used a cowpox inoculum to prevent smallpox infections. However, in the current era of systems biology, where technological advances make it possible to explore the totality of proteins, transcripts, or metabolites in biological samples, it is pertinent to ask whether vaccines have caught up. The field of systems biology integrates different components of a biological system to study its emergent properties and predict its behaviour. The empirical approach deployed to develop most vaccines today uses an injection of an inactivated or attenuated pathogen. Omics approaches in vaccinology can provide markers of vaccine efficacy, improve antigen discovery, and uncover mechanisms of long-term immunity. 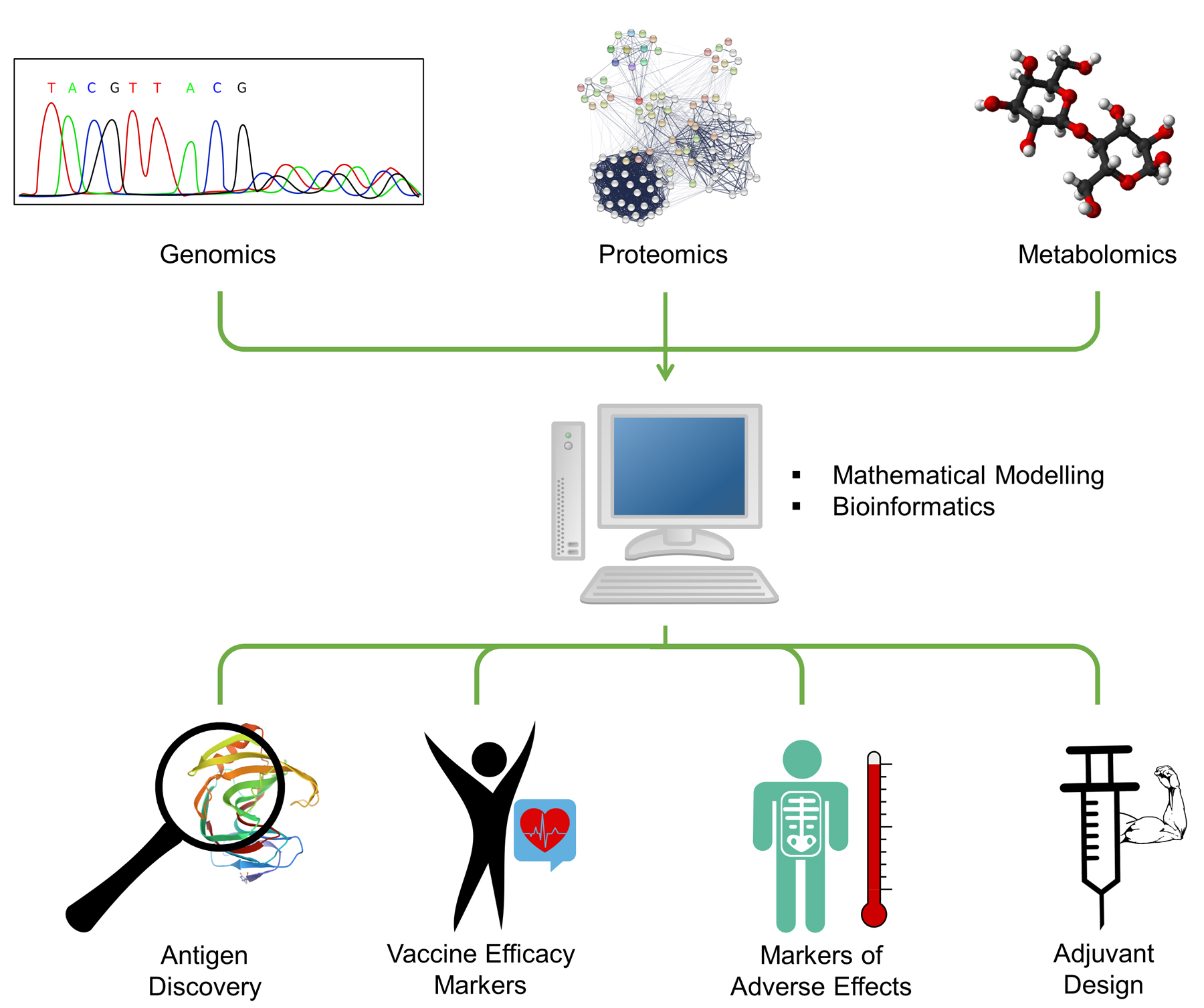 B cells and T cells form an essential pillar of vaccine-mediated immunity. Ideally, the part of the antigen, called epitope that binds with antibodies (produced by B cells) and major histocompatibility complex (MHC) proteins (critical for T cell immunity) must be necessary for the pathogen such that immune reactions against it should neutralize the pathogen. Traditionally, finding the optimal epitope would require a top-down approach starting from whole proteins down to fragments, which increases cost, labour, and time. Omics approaches like protein microarrays and in silico methods such as docking can considerably speed up the process. Such methods have been employed in vaccine development against MERS-CoV, influenza viruses and Dengue virus.

Focus on vaccine efficacy for long has relied on the quantity of antibodies produced and their ability to potentiate effective neutralization of pathogens. While this is an integral aspect of vaccines, omics approaches can give insights on cellular factors whose levels correlate with vaccine efficacy by integrating B cell-mediated antibody response and T cell responses that have not received as much attention as the former. Experiments with the yellow fever vaccine showed that it induced genes like C1qB, EIF2AK4 and TNFRSF17, which shows a good B and T cell response. Similar approaches can also bring in data from proteomics and metabolomics to find markers of efficacy, which can also hint at the mechanism of action, thereby allowing effective vaccine design.

While vaccines are designed to ensure that most individuals achieve protective immunity, undesirable effects also occur. In rare instances, adverse effects can occur alongside common side effects like fever or local swelling. Screening patients can reveal genetic or molecular markers associated with the same. Previously, elevated monocyte levels have been correlated with fatal viscerotropic disease in yellow fever vaccine, and narcolepsy following the 2009 H1N1 vaccine showed association with both ethnic backgrounds and specific HLA haplotypes. With proper surveillance and infrastructure, such predictive markers can fasten regulatory approval and save lives.

In situations where the vaccine cannot trigger an effective immune response, adjuvants are provided with the antigen. They help to recruit innate immune cells that later helps to establish strong B and T cell responses. In silico modelling can help develop new adjuvants that bind strongly to innate immune cell receptors to strengthen downstream signalling. Transcriptome and proteome signatures can be used to compare adjuvants to delineate the diverse responses elicited by them. This can aid both design and usage of adjuvants.

Systems vaccinology can bring the next generation of rational vaccine design by integrating data at multiple levels. This method can successfully reduce the length of clinical trials and costs that pose bottlenecks to vaccine design. Advances in systems vaccinology can also lead the way for personalized immunization, an equitable prospect that caters to everyone in a population.