The human immune system (and of other animals as well), have been developed historically to prevent infections by invading microorganisms, bacteria, viruses etc. This system is not supposed to react against the components of the body itself. However, in rare situations it does, (“friendly fire”) and the outcome is auto-immune diseases. Multiple scelrosis, lupus, celiac are some of them. In some auto-immune diseases, the culprit is a structure in bacteria or a virus that mimics a component of our body tissues. The proteins (“missiles”) the body produces against the invader, called anti-bodies, as well as white blood cells, seek the similar self-components and attack them. 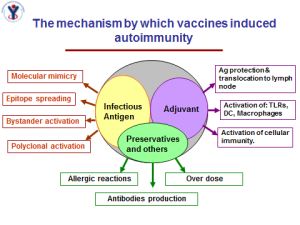 Vaccines have been used for over 200 years for preventing infectious diseases that previously had high morbidity and mortality. An example of this is the eradication of small pox. Vaccines contain a harmless, inactivated or sub particles of the infectious agent which triggers the immune system to react against the invader. They contain also additives to preserve the vaccine and adjuvants (“helping agent”) that augment the immune reaction. All these components may cause side effects including auto-immune disease. Since we immunize healthy people in order to prevent disease, the rare harsh side effects are unwelcomed and adverse events should be carefully assessed and evaluated even if they occur infrequently.

There is evidence of vaccine induced auto-immunity and adjuvant induced auto-immunity in both experimental models as well as in human patients. Adjuvants and infectious agents may exert their immune-enhancing effects through various mechanisms shared by different conditions, like environmental, genetic or combinations of them.

Adjuvants may exert their immune enhancing effects by translocation of antigens to the lymph nodes where they can be recognized by special group of white cells, by protecting the antigen enabling longer exposure, by enhancing local reaction at the injection site and/or by induction of inflammation.

Recently a new syndrome was described: “Autoimmune/inflammatory syndrome induced by adjuvants” (ASIA). This embodies a spectrum of reactions, which are usually mild but may also be severe. These reactions are attributed to adjuvant stimulation, which can include chronic exposure to silicone as in breast implants or aluminum, infectious components and other adjuvants. All of these environmental factors have been found to induce autoimmunity and inflammatory manifestations by themselves both in animal models and in humans. In some individuals, the immune system works on “high gear” and they are more prone to auto-immune disease. There are several case reports of autoimmune diseases following vaccinations, however, due to the limited number of cases, the different classification of symptom, and the long latency period of the diseases, every attempt for an epidemiological study has so far failed to deliver a connection. Despite this, efforts to unveil the connection between the triggering of the immune system by adjuvants and the development of autoimmune conditions should be undertaken.

Although vaccines are widely considered safe, there are subjects with predispositions to whom vaccines pose a bigger threat. As many as 1% of recipients of aluminum containing vaccines may be sensitized to future exposure. Silicone implants induced inflammatory fibro-proliferative response is irrefutable and well documented. Vaccine recommendations should be reassessed frequently in different subsets of the population. This does not invalidate the need for vaccines. However, the lower the possibility of exerting adverse events, the easier it will be for the potential benefits to outweigh risk.

A predictable response to vaccination can be achieved by analyzing the genetics of humans on one side and pathogen variability on the other. Developing a vaccine accordingly, will lead to increased specificity in treatment and leave less room for adverse events.