Verapamil and a loop diuretic modestly reduce the intracellular pH of cortical neurons: a contribution to their anti-seizure potency?

A tight regulation of the intracellular pH ( pHi ) is needed to preserve essential cell functions, e. g. involved in cell communication and viability ( Fig. 1A ). In mammalian cortical neurons, pHi – regulation is driven mainly by membrane-bound transporters acting as acid extruders (e.g. NHE, NBE, NCBE, MCT, H+-ATPases) or acid loaders (e.g. CBE, MCT) (Fig. 1B) and buffering via CO2/HCO3-system or proteins, thereby maintaining the pHi of individual brain tissue neuron populations in the range of 7.0-7.4. It is well known that a critical increase of neuronal activity is followed by a slight to moderate pHi-decrease in the involved cortical neurons, which, in turn, is sufficient to reduce local bioelectric activity (named here “throttle-back”-hypothesis“). The mechanisms being involved in the generation of an increase in net free protons include enhanced energy metabolism, monoaminergic neurotransmission and stimulation of transmembrane Ca2+/H+-ATPase. Free protons reduce excitability, for instance, via increasing extracellular adenosine activity and lowering the function of gap junctions, neurotransmitter receptors or transmembrane voltage gated Na+– and Ca2+-channels, thereafter, being compensated by pHi-regulation. However, pH-regulation can be overwhelmed by a prolonged fall of pHi of more than 0.4 pH-units e.g. via hypoxia or excitotoxicity, thereby increasing the risk of cell death. 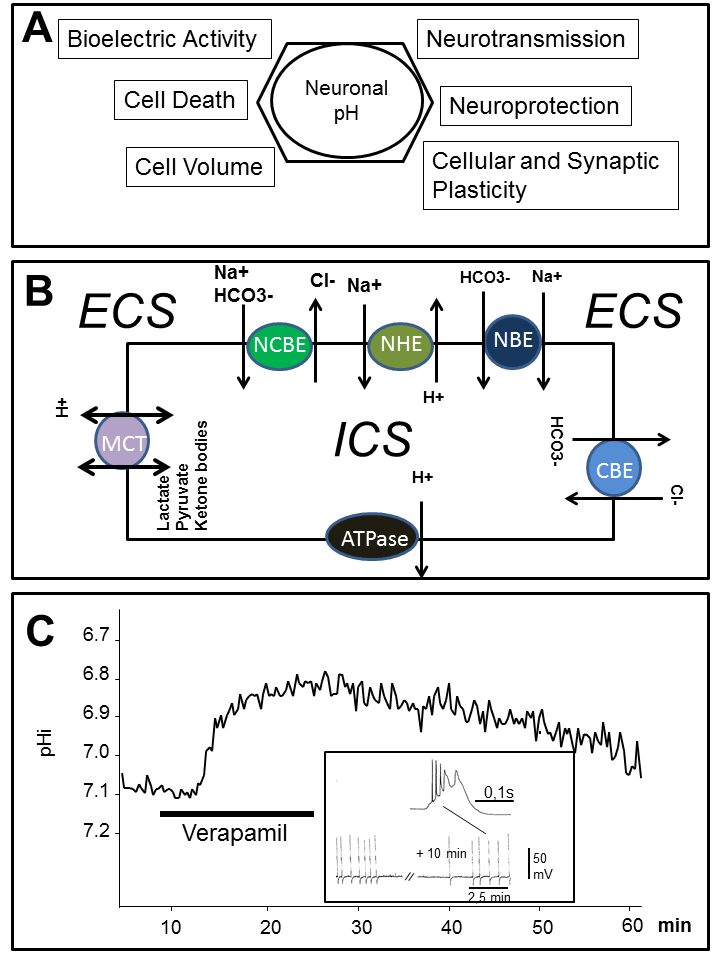 Fig. 1. Nearly all essential cell functions (examples in A) depend on the regulation of the neuronal pH (pHi) which is mediated by transmembrane acid-extruders and –loaders (B) as well as buffering (c.f. M. Chesler, Physiol Rev 2003; 83: 1183-221). ICS=intracellular space, ECS=extracellular space. (C): Intracellular acidification via verapamil (50 µM) of an adult CA3-neuron (hippocampal slice, guinea pig), which had been stained with BCECF-AM before. The verapamil-mediated suppression of an intracellularly recorded spontaneous epileptiform burst activity of a CA3-neuron is shown in the box. Prior to this suppression, verapamil (50 µM) had been 8 minutes in the superfusate, the burst activity reoccurred within 15 minutes of verapamil wash-out.

By our group, some modern anticonvulsants (levetiracetam and topiramate) had been shown to weaken pHi-regulation and reduce pHi of cortical neurons modestly up to 0.3 pH units, which was shown to be powerful enough to suppress the epileptic activity in various in vitro animal epilepsy models. Here we expand the list of those anticonvulsants which have the potential to reduce the pHi of cortical neurons by two further drugs: the phenylalkylamine L-type Ca2+-channel blocker verapamil (Fig. 1C) and the loop diuretic ethacrynic acid. Verapamil or loop diuretics were shown to act beneficially anticonvulsive if co-administered to pharmacotherapy-resistant epilepsy disorders which often occur in young children or neonates (e.g. Lennox-Gastaut syndrome or Dravet syndrome). The question arises, whether both drugs can work as anticonvulsants especially effective in young epileptic brains. Epilepsies in early childhood are often difficult to treat, which appears to depend on the severity of early onset seizures and/or channelopathies (e.g. mutations in genes of voltage gated sodium-channels), such as Dravet syndrome spectrum disorders. One significant factor might be that immature brains are generally more prone to seizures than adult brains. At this juncture, the signaling of the later in adult brains mostly inhibitory neurotransmitter Gamma-Amino-Butyric-Acid (GABA) is clearly age specific and strongly depends on the pHi. In the neonate hippocampus, GABA may facilitate seizure generation as the transmission of GABA is followed by giant depolarizing excitatory potentials in postsynaptic neurons. Notably, a slight intracellular acidification (by 0.06 pH-units) via application of the weak acid propionate was demonstrated to strongly suppress those giant depolarizing GABAergic potentials (Ruusuvuori et al, J Neurosci 2010;30: 15638-42). There is evidence from animal experiments that the tightly regulated steady-state pHi, e.g. of young adult hippocampal pyramidal neurons (pHi ~ 7.2), decreased with aging for about 0.1 pH-unit by changes in the pH-regulation apparatus (e.g. buffer capacity or activity of transmembrane acid/base-transporters) of brain tissue (Roberts and Chih, Brain Res 1998; 779: 271–275). This may render aged neurons more susceptible to metabolic stress and cell death on the one hand and less susceptible to develop spontaneous seizure activity on the other hand. Aberrantly stressed neurons might be more vulnerable even to short-lasting and smaller decreases of pHi and will perish, which might stimulate the plasticity and neurogenesis in sensitive brain regions.

The manifold experimental findings and hypothetical suggestions of how drugs may influence brain pH (c.f. Bonnet et al, Br J Pharmacol 2010; 159: 474-83) should inspire neuro-pharmacologists to take a closer look at the brain pH-regulation system. For example, transmembrane acid or base transporters (Fig. 1B) are suggested to be promising targets for traditional or novel anticonvulsants.