Aerogels are fascinating materials because they are lightweight, highly porous and exhibit huge surface areas. They consist of more than 99% air, while the rest is a well interconnected network of small inorganic or organic particles or polymers. To date, however, the fabrication of aerogel materials is relatively difficult. First the material has to be gelated over a sol-gel process in a liquid medium. In a subsequent step the gel network is supercritically dried by applying high pressure at ambient temperatures. This method is necessary to avoid capillary forces during the evaporation of the liquid medium because it would destroy the filigree network. 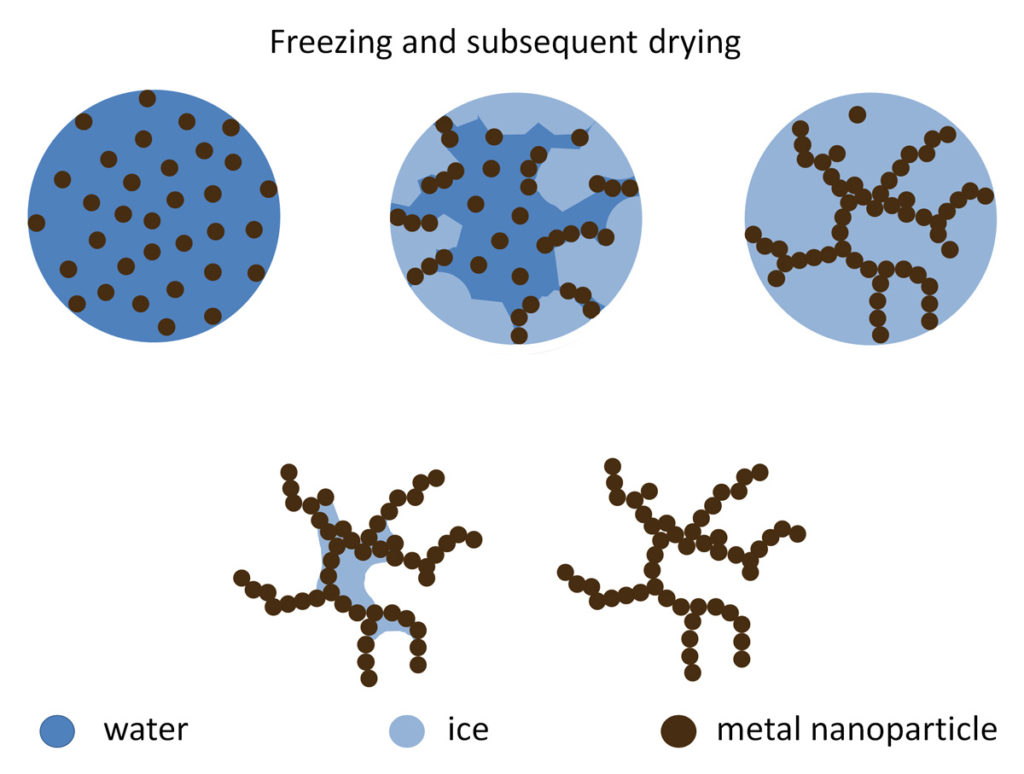 Fig. 1 Scheme of the new fabrication method for aerogels by freezing an aqueous solution containing nanoparticles and subsequent removal of the ice by sublimation in a freeze dryer. The nanoparticles are pushed in the space between the ice crystals during freezing and can form an interconnecting network which remains after sublimation of the ice and builds up the macroscopic aerogel monoliths (Figure from Freytag A et al., 2016)

Our group recently developed a different route to fabricate aerogels from previously synthesized nanoparticles. The new developed procedure utilizes nanoparticles in an aqueous solution of a high enough concentration by freezing them, e.g. in liquid nitrogen, and subsequently freeze-drying. The interconnected network forms already during the freezing process because at low temperatures (depending on the particle size) the particles will be pushed in the voids between the ice crystals. After removing the ice we obtain comparable structures as conventional aerogels but with a much easier and faster process (Fig. 1), since we can circumvent the sol-gel gelation in the liquid medium which strongly depends on the surface chemistry of the nanoparticles and would have to be adjusted for each system separately.

The independency of the type of nanoparticles employed makes our route very versatile towards many different nanoparticle building blocks such as noble metal nanoparticles, metal oxide nanoparticles and semiconductor nanocrystal (Fig. 2). In addition this route offers the possibility of shaping aerogels. If the building block material (nanoparticles) in the pristine solution is concentrated high enough (meaning the volume fraction is higher than 0.1%), the size and shape of the frozen solution and the resulting aerogel monolith are the same. Therefore, if molds are employed, one can get any desired shape, like e.g. a smiley (Fig. 1 and 2C) or create films via doctoral bladeing. 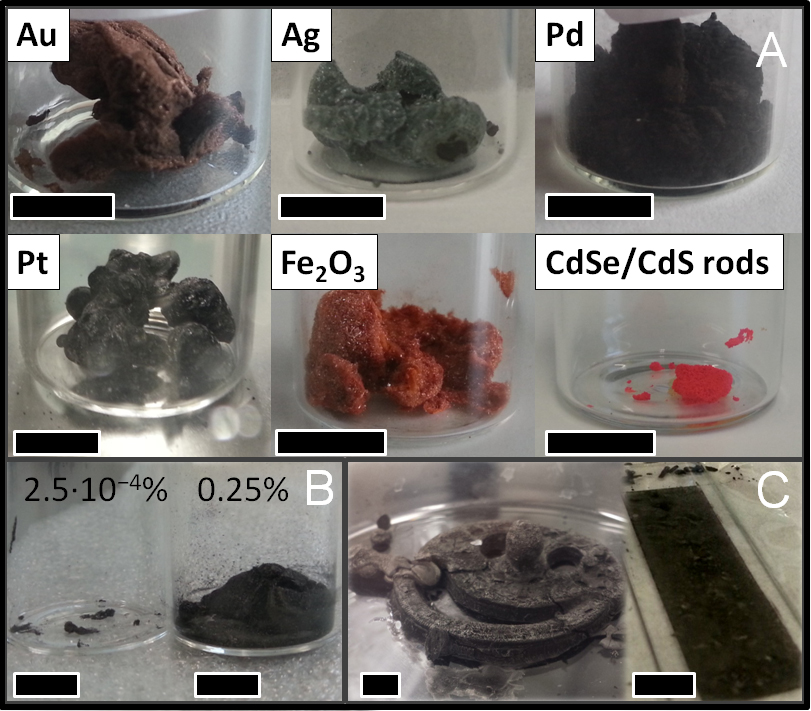 Fig. 2. A) Photographs of aerogels of Au, Ag (both showing alternate colour due to plasmonic features), Pd, Pt, Fe2O3 and CdSe/CdS rod-like NPs (showing luminescent feature – size bar 1 cm). B) Influence of NP volume fraction of the colloidal solution on the final volume of the monolith, both resulting from 1 mL Pd-colloid (volume fractions of 2.5*10-4% and 0.25% on the left and right, respectively). C) Examples for a variety of shapes possible by cryogelation route: smiley in a petri dish or thin film on glass slide (Figure from Freytag A et al., 2016).

In summary we found a fast and facile route to synthesize aerogels by means of a physical process, which is highly versatile towards many nanoparticle materials as building blocks and which offers the possibility to tailor the aerogel shapes. This method might be able to bridge the gap from lab experiments to industrial applications of the advantageous aerogel properties such as high surface areas and interesting optical properties (e.g. photoluminescence and plasmonics) whith the most promising application fields being in catalysis and sensing.