Vitellogenin (VTG) is an estrogen-dependent, females-specific yolk precursor protein naturally synthesized during the reproductive period in the liver of oviparous vertebrates. Released in blood, VTG is taken from the growing oocytes by micropinocytosis and used as nourishment for the future embryo. In 1985, Wallace hypothesized that in females 5–10% of  the total VTG could be produced by the oocyte itself suggesting a possible mechanism of extrahepatic synthesis, also known as endogenous or ectopic vitellogenesis.

In males of oviparous vertebrates VTG gene is obviously silent, but it may be activated by estrogenic exposure. For this reason, the presence of VTG in the liver and/or in plasma of males is considered a good biomarker of xeno-estrogenic pollution. Recent observations show that ectopic vitellogenesis occurs also in males. Indeed, VTG was found in skin, eye, heart, cerebral tissue, epidermis, gills, kidney, white adipose tissue, intestine and muscle of fish males following estradiol-17β or endocrine disruptors chemicals (EDCs) exposure. 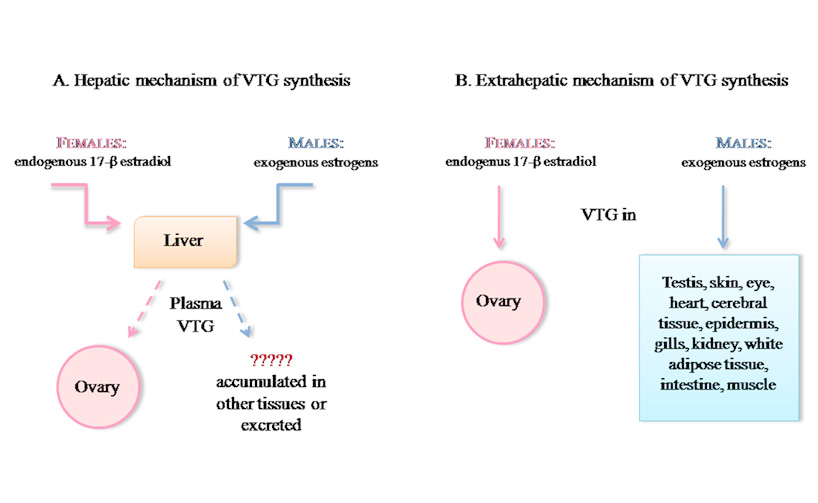 In this frame, the finding of VTG in testis is particularly worrying, since it could interfere with the germinal cells functionality, seriously threatening the continuity of the species. Also in this case, fishes are the protagonists of most investigations: VTG transcripts and/or protein have been detected in the seminiferous epithelium of cartilaginous and bony fishes, both in natural conditions (presumably contaminated) and after experimental exposure to an estrogenic environment.

In terrestrial oviparous vertebrates no data were available on ectopic synthesis of VTG in testis until 2015, when a research performed on male specimens of the lizard Podarcis sicula demonstrated VTG expression and synthesis in testis.

The Italian wall lizard P. sicula is considered an excellent bioindicator model for ecotoxicological studies on soil pollution since it is widespread in the countryside and lives in narrow ranges sheltering under the ground and the rocks. The interest on this small vertebrate is growing since it has been demonstrated that males are able to synthesize VTG in both liver and testis, when experimentally injected with estradiol 17-beta.

From here springs the idea of verifying what happens when this lizard is exposed to two potentially estrogenic conditions: 1) to estrogen metabolites naturally present in manure used as fertilizer in organic farming; 2) to nonylphenol, a substance with known estrogen-like properties widely used as diluent of pesticides used in conventional farming.

Biochemical and biomolecular investigations performed on males collected on fields devoted to organic farming or experimentally exposed to food and water polluted by nonylphenol demonstrated that in both cases VTG expression and synthesis occurred in the liver and in the germ cells of the seminiferous epithelium. The proved absence of VTG receptors in the germ cells also suggested that the presence of VTG protein in the testis is exclusively endogenous. At this point will be of interest to investigate if other tissues are responsive to estrogen or estrogen-like substances thus synthesizing VTG, as occurred in fish.

In addition, further studies will be needed to clarify the possible physiological/pathological role of the VTG produced and released by the liver (and maybe other tissues) and that produced by male germ cells.