VMAT2: a novel biomarker for myopia

Myopia, with increasing prevalence and earlier age-of-onset, is the most common eye disease in the world. But its etiology is still unclear. Lots of studies have confirmed the hypothesis that dopamine (DA) is one of the important retinal neurotransmitters involved in the signaling cascade that controls the axial length which could affect the development of myopia. Vesicular monoamine transporter 2 (VMAT2) can adjust the concentration of DA intracellular and extracellular in the brain neurons through packaging newly synthesized or recaptured DA into the synaptic vesicles, and releasing DA into cytoplasm when receiving stimulus. Studies have found that VMAT2 is expressed in eyes in rat, baboons and human. But the VMAT2 expression in the myopia and its relationships with DA in the eyes have not been studied. 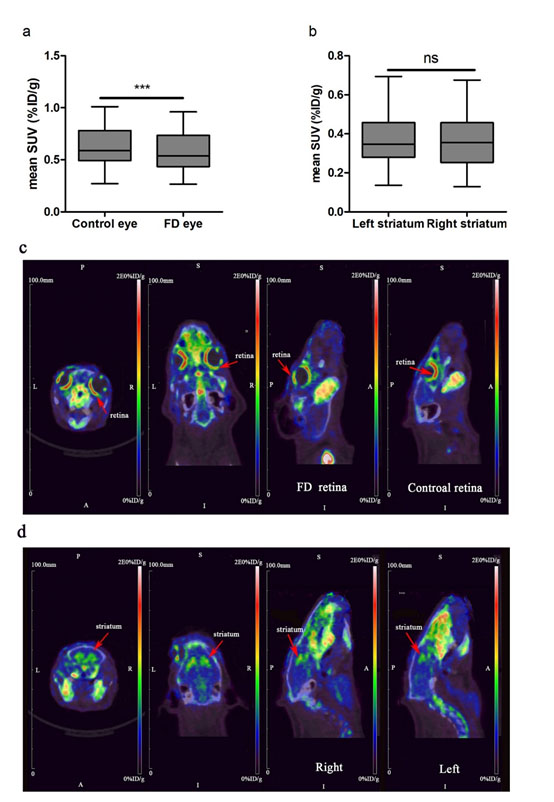 We first established the formed-deprived myopia through covering the right eyes of guinea pigs using a translucent diffuser for 4 weeks. Then we performed micro-PET/CT in myopic guinea pigs using an imaging agent, [18F] FP- (+)-DTBZ, which can detect the expression of VMAT2 in bilateral eyes and bilateral striatum. Western blots and immunofluorescence staining were used to confirm the location and expression level of VMAT2 in the eyes. The concentrations of DA and its metabolites including 3,4-dihydroxyphenylacetic acid (DOPAC) and homovanillic acid (HVA) in eyes were investigated by HPLC. Then Pearson’s correlation coefficient test was used to analyze the correlations among VMAT2, DA, DOPAC and HVA.

Our study indicated that VMAT2 was located at the retina, not the choroid and sclera. The PET/CT imaging showed that the radiotracer [18F] FP- (+)-DTBZ could be used to noninvasively image VMAT2 in the retina. The VMAT2 expression level in the myopic eye was significantly lower than that in the self-control eye detected by both PET/CT imaging (Fig. 1) and Western blots which demonstrated VMAT2 may be a novel biomarker for myopia diagnosis. There were no significant differences between the bilateral striatum (Fig. 1). It also found that the VMAT2 expression levels were positively correlated with DA, DOPAC and HVA levels which were decreased in the myopic eye. Combined with other studies that the DA levels were regulated by VMAT2 in the striatum and DA affects the development of myopia, we hypothesized that decreasing of VMAT2 expression level may play an important role in the development of myopia through correspondingly reducing the amount of DA in the retina.