Vodka and wine consumption: good for your liver?

Approximately 50 million Americans are affected by metabolic syndrome. Metabolic syndrome is defined as hypercholesterolemia, hypertriglyceridemia, high blood pressure and glucose intolerance leading to type 2 diabetes mellitus. Patients with metabolic syndrome have an increased risk of mortality from cardiovascular disease. Modifiable risk factors for metabolic syndrome include those which can be reversed by the actions of the patient such as alcohol consumption. 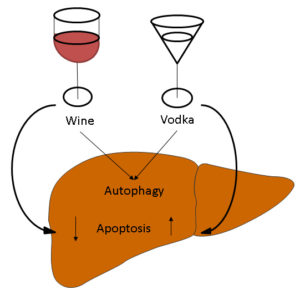 Moderate consumption of alcohol is thought to be beneficial to human health however excessive consumption (in either a binge or chronic form (3-5 drinks/day or 6+drinks per day or >60g alcohol/day, respectively) is thought to be detrimental. Autophagy is a physiological process in the body that serves to maintain homeostasis by protein degradation and turnover of destroyed cells allowing new cell formation during times of stress.

A well-known consequence of alcohol abuse is liver disease characterized as the development of fatty liver. This is otherwise known as alcohol induced hepatic steatosis. Interestingly, it is thought that low concentrations of alcohol may actually protect against hepatic disease by regulating cellular autophagy. Resveratrol, a key component of red wine, is believed to have therapeutic effects on hepatic steatosis by regulating autophagy signaling well. Overall, there is limited evidence regarding the effect of moderate alcohol consumption on liver tissue. Moderate alcohol consumption is defined as 1-2 drinks/per day. Additionally, the dose dependent effect of alcohol is not well understood and there may be a difference between different types of alcohol ingested (vodka verses wine) and their effects on diabetes and hepatic steatosis development.

Our lab recently published a manuscript that examined the effect of moderate alcohol consumption on apoptosis and autophagy signaling in the liver in a clinically relevant animal model of metabolic syndrome and chronic myocardial ischemia. To induce metabolic syndrome 26 Yorkshire swine were fed a high cholesterol diet for 4 weeks. To mimic myocardial atherosclerotic disease, we placed a constricting device on a major artery in the heart. Next we split the pigs into three groups, a control group, a vodka group and a wine group. The control group was given water daily. The vodka group was given 112 mL of vodka per day (40% EtOH content). The wine group was given 375 mL of red wine per day (12.5%EtOH content). After 7 weeks of treatment all animal were sacrificed and liver samples were collected and analyzed.

In this study, we found that moderate alcohol consumption alters apoptosis and autophagy signaling in the liver. Interestingly, vodka may induce pro-apoptotic pathways in liver tissue, whereas wine may induce anti apoptotic signaling. These results provide a mechanism by which vodka may contribute to alcoholic liver disease and supports the notion that red wine, containing resveratrol, may prevent cellular apoptosis in liver tissue in the setting of metabolic syndrome.