Physics is often thought to be quite irrelevant to Biochemistry and Medicine.  But, the very first Physics Nobel Prize in 1901, for the discovery of X-rays, is highly related to Medicine nowadays.  This clearly shows that a new Physics today could make a new Biochemistry or new Medicine in the future.  Indeed, X-ray crystallography, which played an immense role in the discovery of DNA and has become another typical technique today for Biochemists, can be traced its origin at least all the way back to the 1915 Physics Nobel Prize “for their services in the analysis of crystal structure by means of X-rays”. 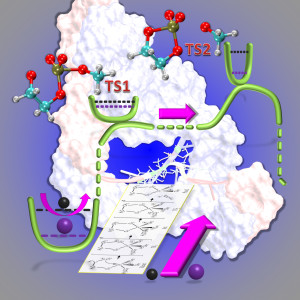 More interdisciplinary examples can be found in one major topic of Modern Physics: Quantum.  The importance of theories in Quantum for quantitatively describing the movement of electrons in chemical reactions has long been recognized by the Chemistry community, which can at least be reflected (i) by the two recent Nobel Prizes in Chemistry (1998 and 2013); (ii) by making Quantum Chemistry as one of the undergraduate standard courses in Chemistry.  In fact, as early as 1960s (or even 1950s), Bernard Pullman and his wife, Alberte Pullman, basically founded a new field called Quantum Biochemistry, e.g., by co-authoring a seminal book entitled “Quantum Biochemistry”, published in 1963.

However, traditionally (e.g., for the aforementioned work), the focus of quantum effects in Chemistry/Biochemistry is on the electronic motions, which may not that easily astonish people.  This is largely because electronic properties are usually too difficult for us to imagine.  On the other hand, although quantum effects on the atomic (or inter-nuclear) motions are relatively smaller, atomic quantum effects should be more readily to amaze everyone about the “weirdness” of Quantum.

Indeed, for instance, due to the atomic quantum effects (e.g., Heisenberg’s uncertainty principle for the zero-point motion), biochemists have found an “insane” phenomenon that heavier molecules can react even faster than lighter molecules during a biochemical reaction.  This phenomenon totally does not make any sense, according to our daily-life experience (as well as according to Newton’s Laws of Motion).  This is because a heavier object has larger inertia that should make it more difficult to move around.  If so, how come heavier reacts faster?!

In this Review, we discuss the quantum origin of isotope effects from the Bigeleisen equation to Feynman’s path integral.  In addition, we also demonstrate a perfect “marriage” between experiment and theory on some biochemical applications, e.g., proton-transfer and RNA reactions.  At last, we also comment on current difficulties in simulating isotope effects with computers.