Since quantum mechanics is the most accurate way to describe chemical bonds, it is also the most accurate way to describe the making and breaking of bonds in chemical reactions. However, even with powerful computers, it is laborious to calculate accurate wave functions for numerous electrons at intervals that are sufficiently frequent to follow the course of a reaction. Instead, approximations are made and wave functions are calculated only for the proposed configuration of atoms at the most critical step along the way between the reactant configuration and the product configuration. This allows a reasonably reliable calculation of the energy of the proposed transition state, but does not assure that the proposed transition state is the correct one. Nor does it provide information on the trajectories leading into or out of the transition state. 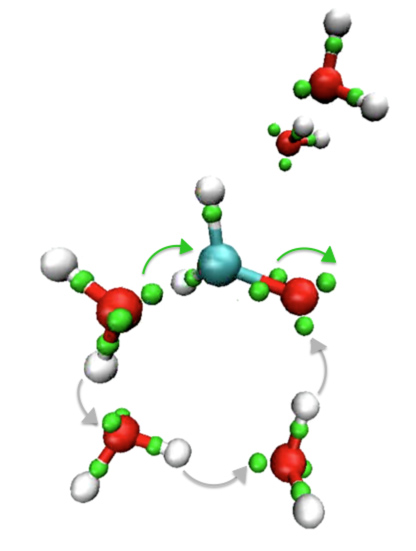 Far more desirable would be a computer simulation that is turnkey in the same sense as an experiment: reactants are mixed and reaction ensues with no prior information as to transition states, or even expected products. One way of doing this avoids explicit description of the electrons by adapting the molecular model of balls connected by springs that was originally developed to simulate molecular vibrations. In the reactive adaptation, the springs can be broken as atoms separate and formed as atoms come together. However, the rules for doing this are complicated and difficult to quantify. This approach also buries all information about what the electrons are doing along the way.

An efficient and intuitive compromise can be had by modeling the outer shell electrons (which are the only ones involved in making and breaking bonds) explicitly, but without wave functions. Instead they are modeled as semi-classical particles: “classical” in the sense that each has a locus in space, but “semi-“ in that their interactions with each other and with the compact kernel of each atom are modified from classical to take wave properties into account.

As proof of principle, our “perspective” paper has collected several examples of turnkey reaction simulations carried out with semi-classical outer shell electrons. One is the addition of a water molecule, H2O, to the double bond of formaldehyde, H2C=O.  The accompanying figure shows a snapshot of the spontaneously formed transition state (with the outer shell electron pairs represented by green spheres). We see that the two simple reactant molecules recruit two additional water molecules to form a ring that facilitates proton transfer by a relay across three hydrogen bonds (gray arrows). Simultaneous electron rearrangement (green arrows) replaces the original C=O double bond with two