To know anything about the unborn human life was pure science fiction until the end of the 1950s. However today, prenatal diagnostics is routine, and many different approaches are available to check out the health of a fetus, and especially its genetics. On the one hand there are invasive methods: placenta can be studied by acquisition of chorionic villi at early weeks of gestation (10th to 12th). As soon as enough amnion fluid is present, amniocentesis can be done to obtain fetal cells (normally after 14th week), and towards the end of the pregnancy even fetal umbilical cord blood can be taken by a syringe (Fig. 1A). All these fetal tissues are suited to be studied by cytogenetic or molecular genetic approaches, and thus to answer the most important question of a pregnant couple: will my baby be healthy and not suffer from any genetic disorder, like Down-syndrome (trisomy 21), Turner-syndrome (monosomy X), trisomy 13 or trisomy 18, triploidy, or anything else. 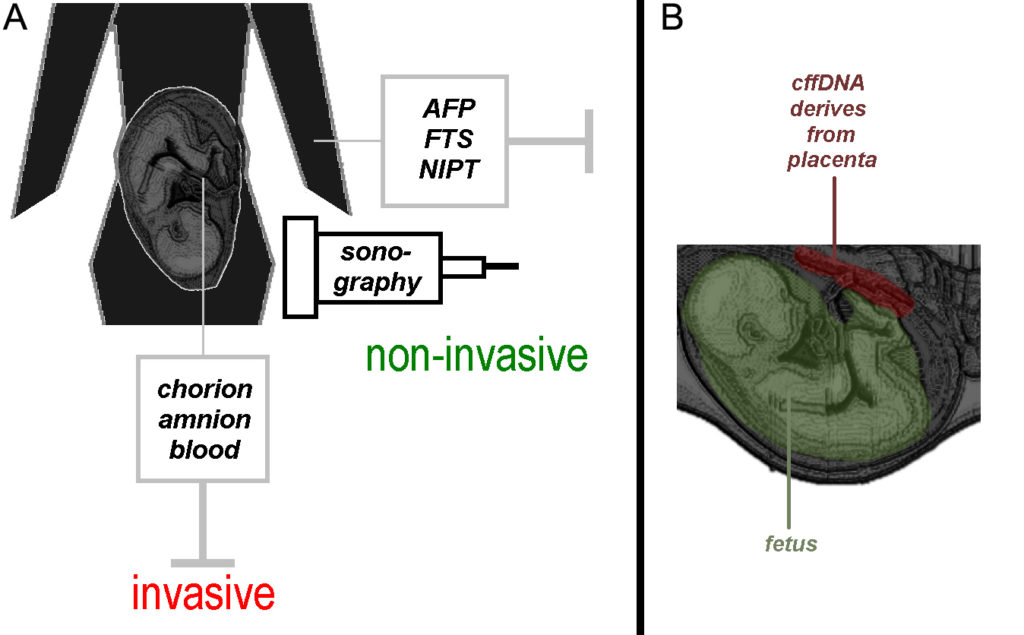 Fig. 1. A. Possibilities of nowadays prenatal diagnostics: Invasive diagnostics is based on acquisition of fetal chorion-, amnion- or blood cells. Non-invasive diagnostics encompasses sonography of the fetus and studying parameters from maternal peripheral blood, i.e. levels of alpha fetoprotein (AFP), PAPP-A and β-hCG in first trimester screening test” (FTS), as well as placental DNA in NIPT.
B. Here the origin of the ‘cell-free fetal DNA’ (cffDNA) is highlighted. Indeed it derives from placenta and not the fetus.

All afore mentioned invasive approaches were correlated in the 1980s with enhanced risks for loss of the corresponding pregnancy; thus, alternative non-invasive approaches for prenatal diagnostics have been boosted during the last decades. Major progress was achieved here by developing further the possibilities of sonographic diagnostics (Fig. 1A). Besides, tests based on parameters detectable from peripheral blood of the pregnant women were developed and promoted. The latter are also considered to be ‘non-invasive’ as the fetus itself is not touched by a needle, but only the veins of the pregnant woman. Since the 1970s alterations of alpha-fetoprotein (AFP) concentration were used for non-invasive detection of anencephaly and spina bifida. In the 1990s the so-called “first trimester screening test” (FTS-test), based on sonography and levels of two proteins in maternal blood (pregnancy-associated plasma protein A = PAPP-A and free β-human chorionic gonadotropin = β-hCG) was established. The FTS-test has a reliability of >95% and detects hints on any kind of genetic defect, being not only restricted to specific ones (like NIPT – see below).

Since several years the “noninvasive prenatal testing” (NIPT) is commercially available and promises incredibly high detection rates and accuracies in detection of trisomy 21, as well as slightly lower ones for trisomy 13 or 18, as well as numerical sex chromosome aberrations. NIPT is based on high throughput methods for analyzing free placental DNA of a fetus, which can be found in the serum of maternal blood; interestingly, this DNA is denominated as ‘cell-free fetal DNA = cffDNA’ in the corresponding literature (Fig. 1A, 1B).

The main argument provided for application of NIPT is, that by using this non-invasive approach the abortion risk of invasive prenatal testing could be avoided – this risk is given still based on studies from the 1980s as 1-3%. Indeed, each MD doing invasive diagnostics today knows that the actual risk figures are at 0.1-0.3% or below. In other words invasive diagnostics is not as dangerous for the unborn baby as often still suggested and announced.

Besides, NIPT is not able to provide any information on the fetus itself, as only placenta derived DNA is studied and no fetal one. As it is well known that at least in 2% of the cases the placental genetic content is different from the fetal one, this means one may find a trisomy 21 in a NIPT test; however, indeed the trisomy 21 was only restricted to the placenta and not present in the healthy fetus. Such cases are already reported, as to be expected. Also it is known that NIPT may detect chromosomal aberrations being present in the mother rather than in the placenta of the fetus. Furthermore, 2-6% of the NIPT tests fail due to too low amount of free placental DNA; such cases need to be repeated and then a result, which was meant to be quickly obtained for the pregnant woman lasts double time, i.e. one month.

So the question is: why to do NIPT? The test is expensive, has to be paid by the families themselves and covers by far not all possible genetic defects. As FTS (including high resolution sonography) already gives an >95% clear-cut risk estimation, what is the additional benefit of NIPT? The main answer could be: NIPT may be used already in very early weeks of gestation before invasive approaches can be used. Still, chromosomal aberrations like trisomy 16 or 22 being observable in these early pregnancies are not covered by NIPT; also, triploidies cannot not be detected due to technical reasons.

Overall: “NIPT for sure is a fascinating possibility to gain information from minimal amounts of DNA. The clinical benefit of it is overall quite low. It has to be considered that families buying this test and getting a normal result may be weight in a false sense of security. Thus, a careful and clear genetic counselling has to be done before the test is offered, clearly explaining its advantages and disadvantages as well as limitations compared to other methods” (cited from the publication mentioned below).

Noninvasive Prenatal Testing – When Is It Advantageous to Apply
Liehr T, Lauten A, Schneider U, Schleussner E, Weise A
Biomed Hub. 2017 March 4