What can computational tools tell us about one of the non-structural proteins on Zika virus?

Zika virus has come to global attention even when it only causes mild symptoms to none. Then, why WHO declared a global emergency in 2016? Beside the rapid expansion of the outbreak through Asia and Latin America, one of the main reasons is that Zika Virus infection can cause severe congenital abnormalities, mainly microcephaly, a condition originated when the baby’s brain has not developed correctly or after developing has suffered some damage during pregnancy. Currently, CDC is recommending that if someone has traveled to areas with risk of Zika to take precautions, in the case of men for six months and women for two months after their travel. Some of the precautions range from use of contraceptives to sexual abstinence to avoid pregnancy, or to avoid infecting the mom and consequently the baby if the woman is already pregnant. 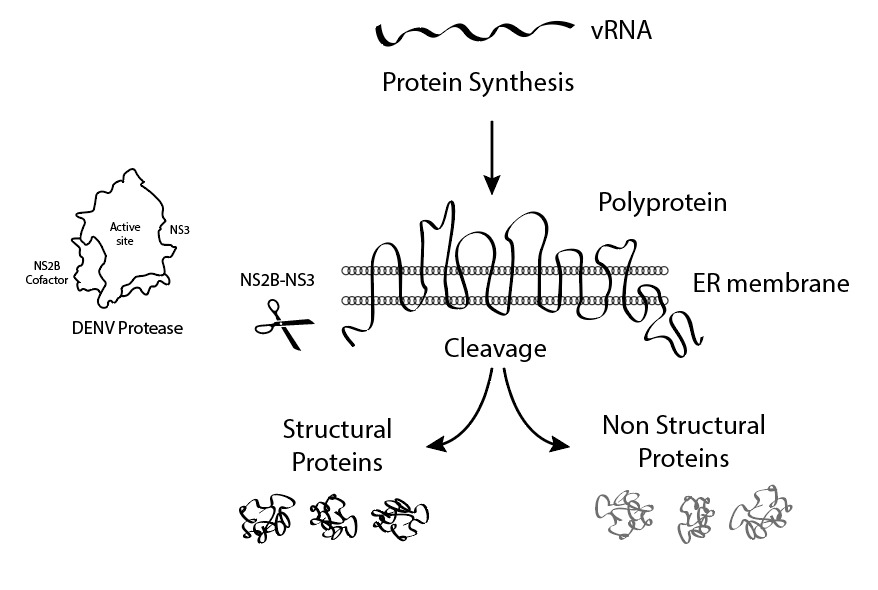 There is no vaccine or drug available for the treatment of Zika. This virus is known for around five decades, but just till very recently, we are indeed starting to get to know about this illness. The so-called “basic science” about Zika virus is now of uttermost importance in helping to accelerate the development of vaccines and drugs. Within this scenario, our team decided to use computational methods to study one of the critical viral proteins required for the life-cycle of Zika.

Zika virus belongs to the same family of Dengue Virus and West Nile Virus. As part of its life-cycle, it produces a single protein (polyprotein) that after cleavage, it produces all the viral proteins needed to accomplish its function inside the infected cell and to assemble the new viruses. Combinations of enzymes of the same host cell as well as a specific viral protease, known as NS3 (non-structural protein 3), are in charge of cleaving the polyprotein. Enzymes usually also require a helper, a cofactor, for the NS3 case the helper is a small protein named NS2b. These two proteins together can cut some sections of the viral polyprotein.

To understand the function of proteins, knowing its three-dimensional structures helps a lot. Even when we know by experimental methods the atomic structure of the NS3-NS2b complex (covalently bound), it is still important to study the protein structure using computational techniques that can give a novel and supplemental information about the structure and consequently the function.

In this case, we were able to simulate the structure when the two proteins are together but not bound by a “covalent bond,” closer scenario to reality. Also, we studied one NS3 bound to one NS2b protein in contrast to the dimer reported in the crystallographic structure (at the point of the study there was no evidence that in a living cell such proteins formed a dimer). For this we used a methodology known as homology modelling that uses as input the sequence of the protein (Virus strain MR766, Q32Ze1 – POLG_ZIKV). Besides, we also studied and further analyzed the experimental structure as was reported in the literature (PDB ID: 5LC0).

We studied how conserved is the protein compared with other viruses of the same family (at the protein sequence level), how many sections it has and what is their function, how flexible the protein is, how strongly it interacts with the protease domain of the NS3 protein and how it interacts with a known ligand. In overall, Zika’s NS2b is highly similar to other viruses in the same family, especially to West Nile Virus. Therefore, the NS2b cofactor is required for the protease complex activity and may also have a role in recognition of the target protein cleaved by NS3.