What drives the syneresis of lacto-fermented sodium caseinate?

Fermented dairy products have a great nutritional value and health beneficial effect on host gut micro-biome, due to their probiotics bacteria. Syneresis is considered as a major defect in these acid-induced gels products, which is a major subject of concern in the dairy industry. Therefore, their textural characteristics are considered as important quality parameters that play a major role in their stability and consumer’s acceptance. Several studies were conducted worldwide on both the process and the composition to improve their properties and their nutritional qualities. However, more innovative efforts are needed to develop new internal matrix and new products. 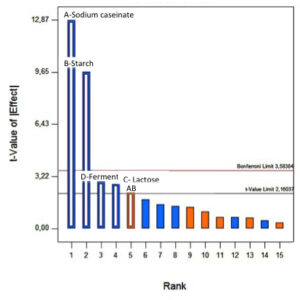 The purpose of this study was to use sodium-caseinate as the main substrate to create physical building blocks within the continuous phase that may substitute the functionality of the removed milk ingredients, and to produce an acid gel-network capable of holding the serum phase with an optimal stability. Accordingly, an experimental design was proposed by using a mixture design of the following selected factors: sodium caseinate (factor: A), starch (factor: D), lactose (factor: C) and ferment (factor: B). The effects of these formulation variables on syneresis of the formed acid gel protein network were evaluated through pH and zeta potential monitoring. Fermentation was performed with conventional lactic acid bacteria Lactobacillus delbrueckii ssp. Bulgaricus combined to streptococcus thermophilus.

Based on our results, The Pareto Chart clearly indicated the two factors (A: Sodium caseinate and B: starch) above the Bonferroni limit (Fig. 1), showing their dominant influence on the syneresis. Accordingly, the sodium caseinate content played the major role of all solids contents in reducing syneresis. A significant decrease of syneresis was detected in all mixtures at 8% of sodium caseinate, ranging between a minimum of 1.8% and a maximum of 20.6% compared to the mixtures at 3% of sodium caseinate in which, the syneresis decrease had ranged between a minimum of 22.2% and a maximum of 47.8%. This variation could be linked to the protein content in relation to the total solids level, and may be explained in terms of a complete denaturation of the protein at its isoelectric point showing more hydrophilic parts, which improved the water holding capacity of the resulting caseinate gel and therefore exhibited less syneresis. The monitoring of pH and zeta potential during the lacto-fermentation process has led to a better understanding of the acid gelation and the syneresis variations. It was observed that the zeta potential decreased in both samples during acidification as showed in (Fig. 2). However, a faster decrease of zeta potential was noticed in sample (i), which is probably responsible for its short fermentation time comparing to sample (iv). The effect of starch on the acidification profile was revealed as an important element to consider in the understanding of the impact of reduced fermentation time on syneresis. 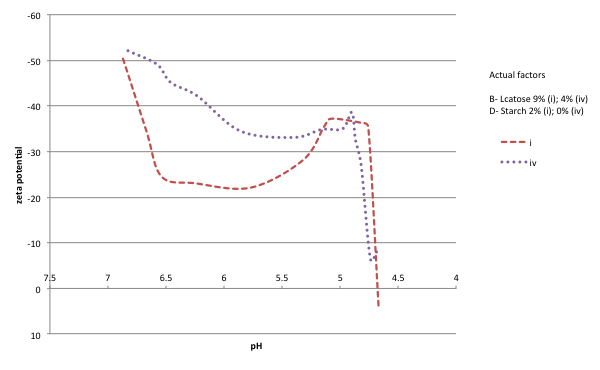 Fig. 2. Zeta potential monitoring in samples set at 5% of A-sodium caseinate and 0,35 g/l of C-Ferment