What is necessary to be prion-like domain?

Prions are infectious proteins that can assume various conformations, including amyloid fibrils that can serve as a matrix and “infect” other proteins both within and between the cells and between organisms. However, it was observed that yeast prions facilitate their adaptation to diverse conditions of the environment. In mammals, they can both cause diseases, sometimes even leading to death, and perform useful functions, such as activating cell-based immunity (protein MAVS), providing for long-term memory (protein CPEB), and forming stress-granule assemblies in conditions unfavorable for the cell. 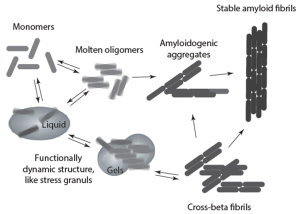 Fig. 1. Schematic representation of prions and prion-like domains that can lead to various conformational states and scenarios.

The aggregation of proteins can occur as a result of cell stress. To prevent unfavorable external effects (heat shock, oxidative stress, UV irradiation, viral infections, and many other factors) that can damage the cell, the eukaryotic cell has developed a mechanism for assembling the nontranslatable mRNA and RNA-binding proteins that accompany their transition into special ribonucleoprotein (RNP) complexes: stress granules (SGs) and RNA-processing organelles (P-bodies). Whereas SGs function as transient “repositories” of mRNA and protect it from proteins, P-bodies perform the selective degradation of mRNA during stress and during the recovery period, constantly exchanging material with the SGs.

SGs are highly dynamic structures and include RNA helicases, kinases, various signal molecules, and ribosomal subunits, in addition to mRNA and RNA-binding proteins. In post-stress conditions, SGs rapidly dissociate, and the cell resumes its functioning. Many RNA-binding proteins required for the formation of SGs contain prion-like domains that, because of the protein-protein interaction, develop dynamic cross-β structures capable of the rapid aggregation and dissociation that are so important for the correct functioning of SGs. Much attention has been paid lately to the investigation of mechanism of formation of cross-b structures which have the properties of liquids but can also develop gel-like forms, thus facilitating the retention of both RNAs and RNA-binding proteins (Fig.1).

Here we demonstrated what properties the protein should have to display prion-like behavior for the formation of dynamic cross-β structures. Proteins forming stress granules are supposed to do this rapidly, that is why they should contain a prion-like domain facilitating this process.

We analyzed RNA-binding proteins with prion-like domains to elucidate their characteristics. It was demonstrated that the prion-like domains in these proteins are intrinsically disordered regions and have several repeats (or tandem repeats) (Fig.2). Based on the known properties of prion-like domains, such as the formation of stress granules (as an example of the reversible aggregation of proteins), one can hypothesize that a large number of repeats is necessary to accelerate the process of reversible cross-β structure/amyloid formation. Many RNA-binding proteins have regions with large amounts of glycine. It has been suggested that these regions facilitate the formation of RNP-complexes and are involved in the splicing of pre-mRNA, as well as having an effect on the posttranslational modifications of proteins. Because having a large amount of glycine helps maintain the protein in an unfolded state, the neighboring amino acid residues determine part of its function. Moreover, aromatic amino acids are critical for the formation of hydrogels modulating the strength of interaction. The presence of repeats should help to determine the border of prion-like domains and should be taken into account in the programs for searching prion-like domains. Such a way, prion-like domains should have repeats of certain motif in the sequence or amino acid composition bias to some repeats, which assists in rapid initiation of the process of assembly.

Repeats are one of the main characteristics of RNA-binding proteins with prion-like domains.
Galzitskaya OV
Mol Biosyst. 2015 Aug