Corals are marine organisms which elaborate calcium carbonate skeletons, a process known as biomineralization or calcification. This process involves the regulation of ions at the site of calcification together with the synthesis of organic molecules such as lipids, sugars and proteins. Since coral skeletons are made of calcium carbonate, the ions involved in calcification are calcium and carbonates which combine according to the reaction Ca2+ + CO32- → CaCO3. Calcium ions are present in seawater at a concentration which is pH independent whereas the carbonate concentration varies with the pH of seawater, according to the equilibrium between the different forms of dissolved inorganic carbon (carbon dioxide, bicarbonate and carbonate). The more alkaline the pH, the higher the carbonate ion concentration, so it’s clear that pH can play a key role in promoting coral calcification. 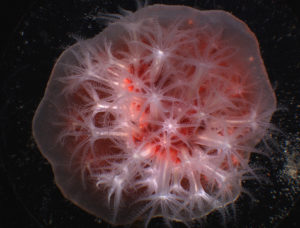 Fig. 1. Picture of a fragment of the Mediterranean octocoral Corallium rubrum grown on a glass slide and used for determination the pH at the sites of calcification.

However, the site of calcification in corals is not in direct contact with seawater, but is separated from the surrounding environment by several tissue layers. In reef-building corals it has been shown that pH is elevated at the site of calcification by biological processes involving enzymes and transporters. These reef-building corals belong to the Hexacorallia sub-class, within the Cnidarian phylum. Their capacity to upregulate pH at the site of calcification was first inferred from indirect isotopic measurements, and more recently from in vivo cell imaging. Currently, almost all available information on pH regulation at the site of calcification in corals comes from studies on these Hexacorallians. However, despite the interest of the scientific community in Hexacorallians due to their ecological and socio-economic value and their vulnerability to climate change, these corals are not the only “corals”. Corals also include organisms which belong to the Octocorallia sub-class, which resemble reef-building corals in general appearance, but their skeletons are different in both morphology and composition. One famous example of corals belonging to this sub-class is the Mediterranean red coral Corallium rubrum (Fig. 1A). It produces two skeletal structures: an axial skeleton and sclerites (Fig. 1B) which are both composed of calcium carbonate in the polymorph of high-magnesium calcite.

Determining and comparing the strategies that Hexacorallia and Octocorallia employ to produce their calcium carbonate biominerals holds the potential to provide novel insight into both mechanistic and evolutionary aspects of calcification. One question of particular interest is: do Octocorallia control pH at sites of calcification like Hexacorallia do? To answer this question, we developed a coral culturing technique consisting of small fragments of corals growing on slides to facilitate access to the sites of calcification of the sclerites and axial skeleton. Then we used the pH sensitive dye SNARF-1 combined with confocal microscopy to measure pH at the site of calcification.

In contrast to reef-building corals, our data in C. rubrum do not show an up-regulation of pH relative to the surrounding seawater. This result shows that up-regulating pH at site of calcification compared to seawater is not a ubiquitous process among corals, and several mechanisms may exist in the Cnidarian phylum. Such a result could also, at least partly, explain why the rate of calcification in C. rubrum is lower than in reef-building corals. However, it is important to consider that pH is only one of the parameters that are likely to govern calcification rates and that other factors are involved such as organic molecules and the supply of dissolved inorganic carbon. Finally, despite the fact that under control conditions C. rubrum does not up-regulate pH at site of calcification compared to seawater, another important issue will be to determine whether it is able or not to regulate pH when the surrounding seawater decreases. Indeed it has been shown in reef-building corals that this capacity is species-specific and explains to some extent their sensitivity/resistance to ocean acidification. It will thus be important to better understand pH regulation in Octocorallia to better predict the future of these organisms in a rapidly changing ocean environment.