What role do medications play in changes in sexual activity after a heart problem?

Heart disease affects millions of people worldwide. While advances in medical treatment have allowed many with heart disease to live longer, healthier lives, changes in quality of life often occur. This is particularly true for sexual activity, an area infrequently discussed by health care providers.  Changes in sexual activity commonly occur, for example, by those who have had a heart attack, coronary bypass surgery, heart failure, or an implanted device.  While many factors can contribute to change in sexual function, medications are believed to play a role for some patients. 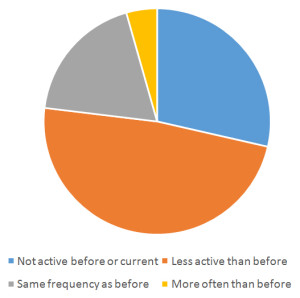 Building upon our prior research, we studied change in sexual activity before and after a heart diagnosis in men and women by type of medication.  A total of 211 patients with heart disease responded to a survey regarding sexual function, and provided a list of regular medications.  A change in sexual activity from before their cardiac event to presently was reported by 44%, followed by 26% who were not sexually active before nor currently (Figure). Most participants reported taking 6 or 7 medications daily.

When further examining the role of medications, those taking first generation beta blockers had sex less often than before or were not sexually active, supporting findings from prior studies showing adverse effects of older beta blockers on sexual function.  Surprisingly, third generation (newer) beta blockers contributed to decreased sexual activity, especially for women.  Few studies report sexual side effects of third generation beta blockers; thus, this finding needs to be further studied and verified. Men reported decline in sexual activity when taking nitrates or vasodilators.  Of interest, diuretics as a whole and loop diuretics contributed to change in sexual activity, particularly for women.  While potassium sparing and thiazide diuretics have been associated with sexual dysfunction, no other studies were found related to loop diuretics and cardiac patients.  Further research is needed with men and women, and larger samples.  We analyzed written comments from participants, adding to our understanding of problems experienced by patients and their partners.  Erectile dysfunction was frequently mentioned by men and often attributed to medications, followed by medical problems in general. Others discussed changes in partner relationships and patterns of sexual activity, supporting the numerical data.  This illustrates that changes in sexual activity or sexual dysfunction have multiple causes, with medications as one factor. A few participants mentioned that the cardiac condition did not affect the sexual relationship.

What our study clearly shows is that change in sexual activity from before to after a cardiac event is problematic for many patients, and medications may play a role.  Caution is needed, however.  People should not stop any medication without talking to their health care provider; this can be dangerous for some medications. If one suspects a medication is causing a sexual problem, schedule an appointment so that sexual function, medications, other conditions, and questions can be thoroughly addressed.