What treatment is really medically and economically desirable for chronic hepatitis C patients with treatment failure after 8-week glecaprevir/pibrentasvir in Japan?

Currently, direct-acting agent (DAA) therapies have high efficacy and safety and are the main strategy to eliminate hepatitis C virus (HCV) worldwide. Some DAA therapies are also effective for HCV-infected patients who have experienced prior DAA failure. In Japan, glecaprevir (GLE)/pibrentasvir (PIB) and sofosbuvir (SOF)/velpatasvir (VEL) plus ribavirin (RBV) are currently available for patients with DAA failure. The most medically important difference between the two regimens is that HCV with a resistance-associated substitution (RAS), P32 deletion in the non-structural protein (NS)5A is highly resistant to GLE/PIB, while SOF/VEL plus RBV is effective for HCV with this RAS. However, in the case of SOF/VEL plus RBV, the medication cost is more than double that of GLE/PIB (Fig. 1A) and the duration of therapy is twice as long (Fig. 1B). 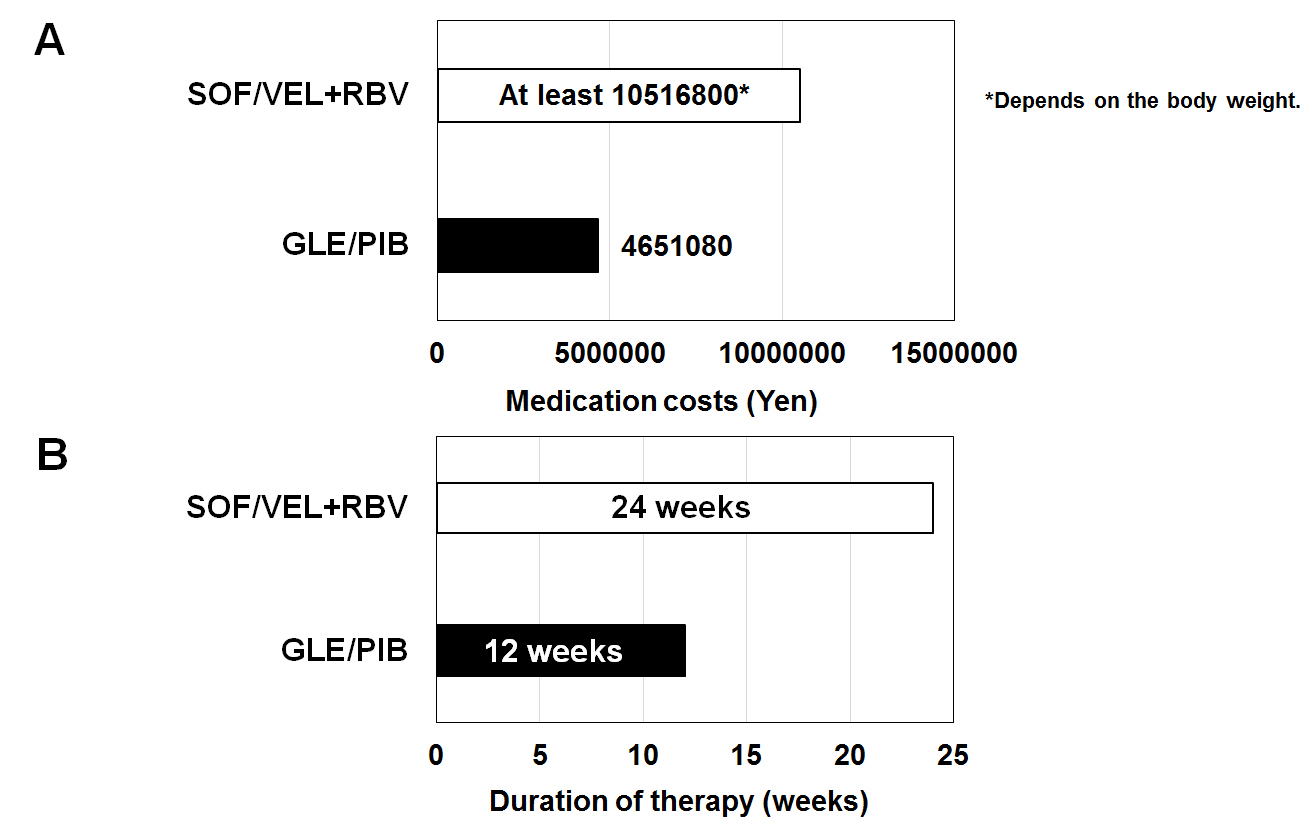 Viral elimination is conventionally judged as a sustained virologic response at post-treatment week 12 (SVR12), as viral relapse is scarcely observed after post-treatment week 12. Virological efficacy is classified into several categories: (1) non-response, serum viral disappearance is never observed during DAA treatment; (2) viral breakthrough, serum viral disappearance is observed once but serum viral re-emergence is observed during DAA treatment; and (3) viral relapse, serum viral disappearance is observed once and continues at the end of treatment but viral re-emergence is observed after the end of treatment. A non-response or viral breakthrough potentially suggests the existence or emergence, respectively, of RAS during DAA therapy if the drug adherence is considered sufficient. Thus, the same regimen should not be administered to patients with a non-response or viral breakthrough, even though the duration of treatment is extended. However, viral relapse sometimes implicates an insufficient duration of DAA therapy. Treatment with GLE/PIB having pan-genotype antiviral activity is highly effective, safe and well-tolerated. The duration of GLE/PIB therapy can be reduced from 12 to 8 weeks in genotype 1 or 2 patients without liver cirrhosis. In the case of treatment failure of GLE/PIB therapy, SOF/VEL plus RBV can generally be applied. At present, it is difficult to administer the same regimen with health insurance coverage in Japan even though the duration of the regimen is extended. We experienced a case in which 12-week GLE/PIB therapy was effective for a genotype 2a DAA-naïve non-cirrhotic hepatitis C patient with viral relapse after 8-week therapy. In fact, after failure on initial 8-week GLE/PIB therapy, we confirmed that RASs against GLE or PIB were not detectable.