What, why, how? Everyday sunscreen protection

The electromagnetic radiation which reaches the Earth from the Sun has an extensive impact on life. Very high energy components of the solar spectrum, gamma rays and X-rays for example, are reflected by Earth’s upper atmosphere, protecting us from these harmful forms of electromagnetic radiation. The most energetic radiation which reaches the Earth’s surface are the longer wavelengths (>280 nm) of the ultraviolet region (UV, ~220-400 nm), specifically, the UVB (~280-315 nm) region and the shorter wavelengths of the UVA region (<340 nm). It is this radiation which commercial sunscreens are developed to protect our skin and underlying tissues from. Of course, not all exposure to this radiation is bad for you; UVB is known for example to be an essential catalyst in the production of Vitamin D, but there is strong evidence that suggests overexposure to UVB is a primary factor in developing skin cancer, and similarly, overexposure to UVA can contribute to the ageing of skin. The components of sunscreens are selected for many complementary reasons given that typically one molecule cannot satisfy all the criteria of a good sunscreen. Organic filters (i.e. larger carbon-based molecules) absorb UV radiation, and dissipate the energy in a safe way, as heat energy for example. Inorganic filters (e.g. metal ions) on the other hand are typically used to reflect radiation away from sensitive tissues. In addition to these filters, some molecules are included in sunscreen mixtures to help stabilise other components or to improve the compatibility of the mixture with the skin. 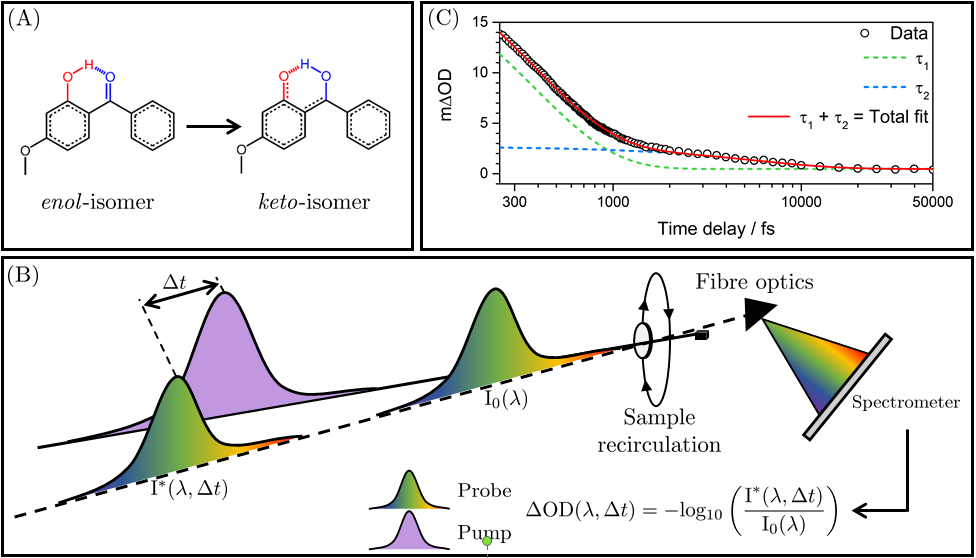 Fig. 1. (A) The structure of oxybenzone in its initial enol-isomer (left) and subsequent keto-isomer (right), one of the first steps of the relaxation process after UV excitation. (B) The experimental setup for pump-probe spectroscopy used throughout this study, see main text for details. The absorption of the probe before excitation is denoted I0 and the absorption of the probe after excitation is I*; both are used to calculate the change in optical density (ΔOD). (C) A selection of experimental data; oxybenzone in methanol after UVB excitation. Nonlinear curve fitting (red line) of the ΔOD for an increasing pump-probe time delay (Δt) reveals two exponential decays with lifetimes τ1 (green dashed line) and τ2 (blue dashed line), which corresponds to dynamical processes. A similar procedure is used for other excitation wavelengths and solvents. Lifetimes are summarised in Table 1.

In this study we focus on one particular organic filter, oxybenzone (OB, see Fig. 1A), which is found in some commercial sunscreens. It absorbs radiation over a broad wavelength range covering both UVA and UVB regions. However, the mechanism by which it dissipates energy (relaxes) following absorption of radiation remains sparse. Given the types of mechanisms which are likely to be operational, the technique used must resolve dynamics on the femto- to picosecond time scale (fs = 10-15 s, ps = 10-12 s). Transient electronic absorption spectroscopy (TEAS) can measure the excited state absorption profile of OB over such timescales, see Figure 1B. At the heart of TEAS is the use of pump-probe spectroscopy. Here, a white light femtosecond laser pulse, referred to as the probe, is absorbed by OB, measuring an absorption of I0. Another femtosecond laser pulse, referred to as the pump, excites OB in the UVA, UVB or the UVC (~220-280 nm) region depending on the experiment. At a specified time later, Δt, another probe pulse is absorbed by the excited state OB and is recorded as I*. From this the change in optical density (ΔOD) is calculated.

Nonlinear curve fitting of ΔOD for increasing Δt, as shown in Figure 1C, reveals two exponential decay functions, the lifetimes of which depends on the excitation wavelength (UVA at 325 nm, UVB at 287 nm or UVC at 243 nm) and the solvent used (the nonpolar solvent cyclohexane, or the polar, hydrogen-bonding solvent methanol), and are summarised in Table 1.

Table 1. A summary of the lifetimes determined from nonlinear curve fitting of OB after UVA (325 nm), UVB (287 nm) or UVC (243 nm) excitation in either cyclohexane or methanol.

Drawing inference from previous studies on OB and similar systems, the short lifetime, τ1 may be understood as an enol-keto isomerisation as depicted in Figure 1A. After this ~90 % of the molecules release excess energy as heat to the surrounding solvent whilst undergoing isomerisation back to the enol-isomer. This processes is responsible for the longer lifetime, τ2. Exciting OB with increased energy minimally effects both lifetimes which is to be expected following Kasha’s rule. On the other hand, OB in methanol shows consistently shorter τ2 lifetimes which can be explained by the increased hydrogen bonding speeding up heat transfer from OB to the solvent. The remaining ~10% of the molecules are suggested to form a stable, long-lived, photoproduct based on ab initio calculations.

Concluding the study, we find OB behaves as a broadband UV absorber which efficiently relaxes predominantly to the original enol-isomer irrespective of the excitation wavelength or solvent used – all on ultrafast timescales, making a single OB molecule available to reabsorb UV radiation multiple times. These findings may find use in future sunscreen development or for photosensitive industrial applications where UVC radiation can be found.