Neuroscientists have long wondered why some behaviours are mostly controlled by one side of the brain. This phenomenon is called brain lateralization. For centuries we have known that damage to the left but not the right side of the brain often results in the inability to speak (aphasia). Conversely, an intriguing loss of awareness on the left side of personal space (hemispatial neglect) occurs more frequently after right rather than left hemisphere lesions. Cognitive functions are not the only brain processes that are lateralized; sensorimotor functions show hemispheric specialization as well. The right hand, which is controlled by the left hemisphere, is used more often for manual actions such as reaching, grasping, and using tools; this is even true in about 50% of left-handers. The left hand, which is controlled by the right hemisphere, is more specialized for identifying objects by touch (haptic discrimination) regardless of handedness. 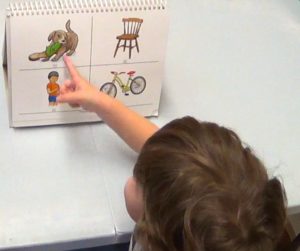 Fig. 1. The experimenter read a word, and the child pointed to the picture that represented the stated word. Children were more likely to select a correct response with their right hand.

Evidence from our work and others suggests a link between cognitive and sensorimotor functions that are lateralized; for example, manual actions and language. Pointing is a simple communicative gesture that emerges early in development and studies have demonstrated that most infants and toddlers prefer to use their right hand when pointing. Follow up testing revealed that those children who showed a right-hand preference for pointing, developed better language skills than infants who did not. Right-hand use for grasping also appears to predict language skills. Consistency in right-hand use in 6-14 month-old babies was associated with better language performance at two years of age. Furthermore, 4-5 year-old children who use their right hand more for picking up objects show better differentiation of sounds in a speech task. Further work from our laboratory has provided exciting evidence of a relationship between right-hand preference and Executive Function (EF). EF is a term that describes a set of cognitive abilities that include: behavioural inhibition, cognitive flexibility, and working memory. Using a brick-building task (i.e. Lego) children were required to produce replicas of simple pre-made models. Many bricks were scattered across a tabletop and children’s hand use for grasping the bricks was analyzed. Parents of these children completed a questionnaire (Behavioral Rating Inventory of EF) regarding their child’s EF. The results showed, that children who used their right hand more often for grasping had better reported EF.

Less studied is the relationship between sensorimotor and cognitive functions of the right hemisphere. Early research in the 60’s and 70’s showed that blind individuals were more accurate and faster when using their left hand to read Braille. More recent studies have shown that infants prefer their left hand for manipulating objects and show better memory of the objects when this hand was used. It is important to note that the majority of studies that investigated haptic abilities and hemispheric differences have used 3D objects. These objects inherently convey additional spatial information, thus haptic and spatial processes are deeply intertwined. Some research including our own, has demonstrated that children and adults who perform better on haptic discrimination tests show better spatial skill. More research needs to be done to allow a better understanding of the relationship between these two functions.

It is almost certain that lateralization for sensorimotor control predates lateralization for cognitive functions. Therefore, we propose that sensorimotor processes and their specialization to one hemisphere were foundational to the later emergence of hemispheric dominance for cognitive abilities such as language and spatial skills. Arising directly from this proposal is the possibility of training sensorimotor functions to enhance cognition. Simple motor training strategies may provide a means to promote language, executive function, and spatial abilities.