When the butterflies in the stomach prevail over the rationality: the case of alexithymia in intertemporal decision making

We are frequently faced with choices differing in the timing of their consequences, also called intertemporal choices. An example might be the following: should I spend my money now in an expensive holiday or put it into a savings account with the aim to buy a house in the future? This is a clear example of intertemporal choice: we have to decide whether to go for an immediate option (expensive holiday), or to forgo the immediate gratification and wait to get a larger reward (buy a house). Often, individuals tend to prefer smaller reward available in the short run over larger reward delayed in time, and this tendency is even larger when the sooner reward is available immediately. 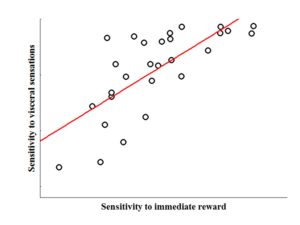 Although intertemporal choice seems to be a purely rational type of affair, the influence of emotion is essential. Indeed, optimal intertemporal decisions arise from the balance between an emotional-visceral component, signaling the need for immediate gratification (i.e. how strong our desire of the holiday is), and a higher level component, which allows to reason on the emotions we are feeling (i.e. how much important we consider to have a property instead).

In our study we investigated intertemporal decisions in individuals with alexithymia, a personality trait characterized by the difficulty in understanding one’s own and others’ emotions. Relevant for this study, alexithymia is characterized by only partial elaboration of the emotional content of the stimuli. In particular, alexithymic individuals strongly focalize on the visceral component of emotions and fail to translate these signals into higher level of emotional processing and awareness. For instance, alexithymic individuals are incredibly able to feel their bodily sensation, as increased heart frequency or butterflies in the stomach, but they fail in understanding the causal link between the emotional situation and these bodily changes. Thus, they fail in interpreting the bodily changes as emotions.

Our hypothesis was that, in the context of intertemporal choice, alexithymia may result in enhanced activation of the low level emotional-visceral component over the high level rational one. As a consequence, the rational component, i.e. the ability to reason on the emotions, would be relatively less represented, thus weakening the ability of alexithymic people to pursue long term self interests. To test this hypothesis, participants with high- and low-alexithymia level were compared at an intertemporal decision-making task, and their choice behavior correlated with their ability at detecting their own heartbeat.

Together, these results suggest a disproportionate valuation of immediately available reward in high alexithymia, possibly reflecting heightened perception of bodily physiological signals, which ultimately would bias their intertemporal decision-making. The underlying mechanism might be their heightened representation of internal bodily signals reporting the body’s physiological state. This mechanism would result in higher tendency of alexithymic to be driven by the butterflies in the stomach, which ultimately would result in impulsive and therefore suboptimal choices.