When will my mouse die?

The maintenance of health is ensured by the function of the three homeostatic systems of the body: the nervous, endocrine and immune systems, and by the net that allows crosstalk between them: the neuroimmunoendocrine communication. With aging, these systems as well as their communication get impaired, being this the cause of the age-related increased morbidity and mortality. Among the theories that try to explain the aging process, the oxidative theory of aging believes that it is the increase in oxidative stress in cells the first step into damage and malfunctioning. Based on the above, a set of functions of immune cells, their oxidant/antioxidant balance, as well as the behaviour (as a way of evaluating the function of nervous system) that one mouse show at a given time could indicate the rate at which the mouse is aging. 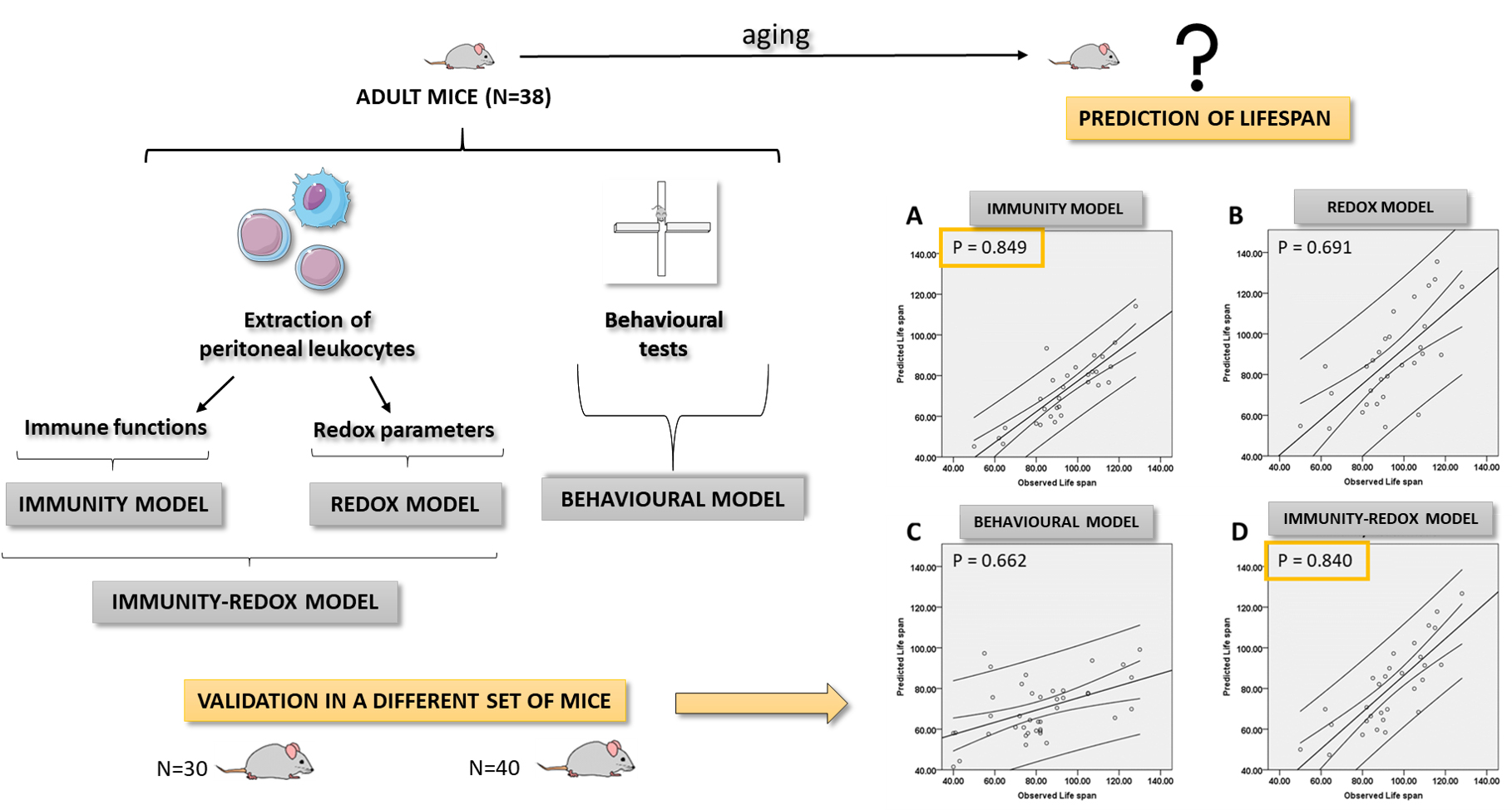 To validate this hypothesis, 30 variables including immune functions, inflammatory-oxidative stress state and behavioural characteristics were investigated in ICR-CD1 female mice at the adult age (N = 38). Mice were monitored individually until they died and individual lifespans were registered. Afterwards, a multiple linear regression approach was performed with the analysed variables to construct a mathematical model for allowing prediction of lifespan. Multiple linear regression procedure chosen was the step-forward. This methodology chooses first the variable that explains the most the observed lifespan, then the second one and so on, only if the added variable into the model is statistically significant once added (P < 0.05).

At first, each set of parameters (immune, redox or behavioural) were used to develop a mathematical model for lifespan prediction. Thus, an “Immunity model” was created comprising three immune functions: macrophage chemotaxis and phagocytosis as well as the proliferation capacity of lymphocytes.  This model showed an adjusted R2 of 75.8% in terms of explaining the differences in lifespan observed among mice. In addition, a “Redox model” was also generated involving also three redox variables: reduced glutathione (an antioxidant compound) and malondialdehyde (a marker of lipid peroxidation) concentrations as well as glutathione peroxidase activity (antioxidant enzyme) obtaining an R2 of 84.4%. Moreover, a “Behavioural model” comprising two behavioural variables (internal locomotion in the hole-board test and time spent in open arms in the elevated cross maze test, both related with anxiety state) was also built with an R2 of 79.8%. Secondly, all parameters together were introduced for generation of the “Combined model”, which selected six variables: internal locomotion, macrophage chemotaxis, reduced glutathione, macrophage phagocytosis, time in open arms and malondialdehyde concentration obtaining an R2 of 92.4%. Thirdly, only immune and redox parameters were used for construction of the “Immunity-Redox model” which incorporated all the variables included in the Immunity and Redox models reaching and adjusted R2 of 88.7%.

These results suggest that immune and redox parameters can be used for predicting lifespan in mice and given the similar age-related changes that these parameters undergo in humans and mice, they have the potential to be used as predictors of mortality in humans.