When you and me become two sides of one coin

Since about mid-1700 western ideology increasingly emphasizes individualism and the distinction between a person and his or her social environment. But the separation between oneself and others has been shown to vary between individuals and even from situation to situation. For instance, emphasizing commonalities and having people marked relational pronouns (we, us, ours) in a text promotes the integration of others into one’s own self-representation. 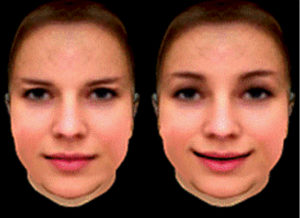 Examples for the neutral-looking (left) and smiling (right) three-dimensional heads/faces that moved either in synchrony with the participant’s own head movements or with a noticeable delay.

In a recent study, Ma and colleagues (2016) have studied another way to promote other-integration. They used sensors and Kinect™ to measure the head movements of human participants online. The participants were exposed to a virtual three-dimensional human head, which in one condition moved and rotated in synchrony with their own head movements, and in another condition with a noticeable delay. As suggested by previous findings, participants had a stronger feeling of the virtual head becoming a part of their own body or self in the synchrony condition than in the delay condition.

Next, the authors made the virtual head either look neutral or smile either before or after the manipulation of synchrony or delay. If the face looked neutral or if it smiled before the synchrony/delay manipulation, there was no change of the participant’s mood. After experiencing synchrony with a smiling face, however, participants became significantly happier and improved in a mood-sensitive creativity task (brainstorming).

These observations suggest that our self-representation can be rather plastic and include other individuals, be they real or virtual in nature. If we integrate others into our self-representation, we also seem to start confusing our own features and states with the features and states of the other, so that the happiness of the other becomes our own.

This demonstration of “mood migration” from other two self has important implications for social interaction. On the positive side, we can apparently literally adopt mental states of close others and benefit from them. On the negative side, however, we may also take over negative attitudes and literally make them our own.