Which healthcare providers are more likely to screen women for domestic violence?

At least one in four U.S. women experience intimate partner violence (IPV) in their lifetime. Victims often need intensive physical, emotional, and financial services to recover from their abuse. Early and careful screening could reduce suffering, disability and death if appropriate referrals are made. Given that violence can be contagious, screening for IPV and referring victims to available services could prevent violence from spreading to families and communities. 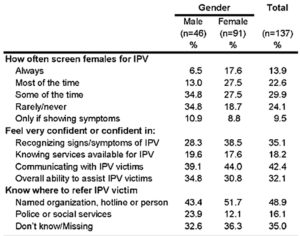 Many healthcare providers, especially in primary care and obstetrics/gynecology, have regular contact with female patients and are in a good position to screen women privately for IPV. Routine screening could identify IPV among patients who are unlikely to disclose IPV unless asked. Various professional organizations promote universal IPV screening of women in healthcare settings, starting from age fourteen.

In 1993, California passed a law to mandate IPV screening in healthcare settings. However, no enforcement mechanism exists. This study’s main purpose was to delineate current screening practices of primary health care providers in southern California. From October 2013 to March 2014, 137 primary care providers (doctors, nurses, nurse practitioners and physician assistants) in Southern California completed self-administered surveys about their IPV screening practices. About half were physicians and two-thirds were women. Nearly 60% served mainly low-income patients.

Our main finding was that only about one-third reported that they regularly screened women for IPV, which is inadequate. Female providers and non-physicians were somewhat more likely to screen. In general, providers did not express much confidence in their ability to identify victims of domestic violence or provide assistance to them. Only one-third felt confident that they could assist victims of domestic violence. About half of providers could name a place, hotline, or social worker to refer a female patient who reported IPV. There was no significant difference in reported confidence by occupation or gender.

The main predictors of whether screening occurred regularly were: being a female provider, having mainly low income patients and feeling confident in one’s ability to help. While female providers engaged in more and better screening, they did not feel more confident, nor did they have greater referral knowledge. Perhaps female providers simply feel more at ease in speaking about sensitive issues like IPV with female patients or were more willing to take the time to screen because of greater empathy with victims.

Serving a predominantly low-income population was another main predictor of screening. It is not known if this was due to providers’ implicit bias that higher income patients are not at-risk for IPV, if providers had more institutional pressure to screen when they served a low-income clientele, or if they found it awkward to broach the topic with women from their same social strata.

This study had several policy implications. Given that male providers were significantly less likely to screen frequently and appropriately, more attention may need to be given in medical schools and professional associations to building men’s skills and confidence in broaching sensitive topics like IPV with female patients. Offering in-house or online training focused on how to screen patients, where to refer and how to document abuse might build confidence and increase screening frequency of all providers. In addition, better communication needs to occur between healthcare providers and IPV referral/service agencies. Agencies should advertise their services to all health facilities within their catchment area, and management needs to make more effort to have this information readily available to providers. These approaches could lead to more screening and better assistance to patients experiencing IPV in California.