Although the discovery of ancient humans remains was first reported in 1833, the Neanderthal bones from Feldhofer Grotto were the first to receive a species name: Homo neanderthalensis (King 1865). In 1894, Dubois boldly referred “ape-man” specimens from Trinil, Java to a new genus and species, Pithecanthropus erectus. Into the 20th century, as Upper Paleolithic, Cro-Magnon-like specimens were added to Homo sapiens and others to Homo neanderthalensis, Homo received the species Homo heidelbergensis (for a mandible) and Homo rhodesiensis (for a skull), while new genera (genus plural) and species were created for specimens from South Africa (e.g. Australopithecus africanus, Paranthropus robustus) and China (Sinanthropus pekinensis). Excavations in the 1930s at Ngandong and in the ‘40s at Sangiran (both Java) yielded numerous specimens that were shuttled between previously- and newly-named genera and species. By 1949, at least nine genera and thirteen species of hominid were recognized. 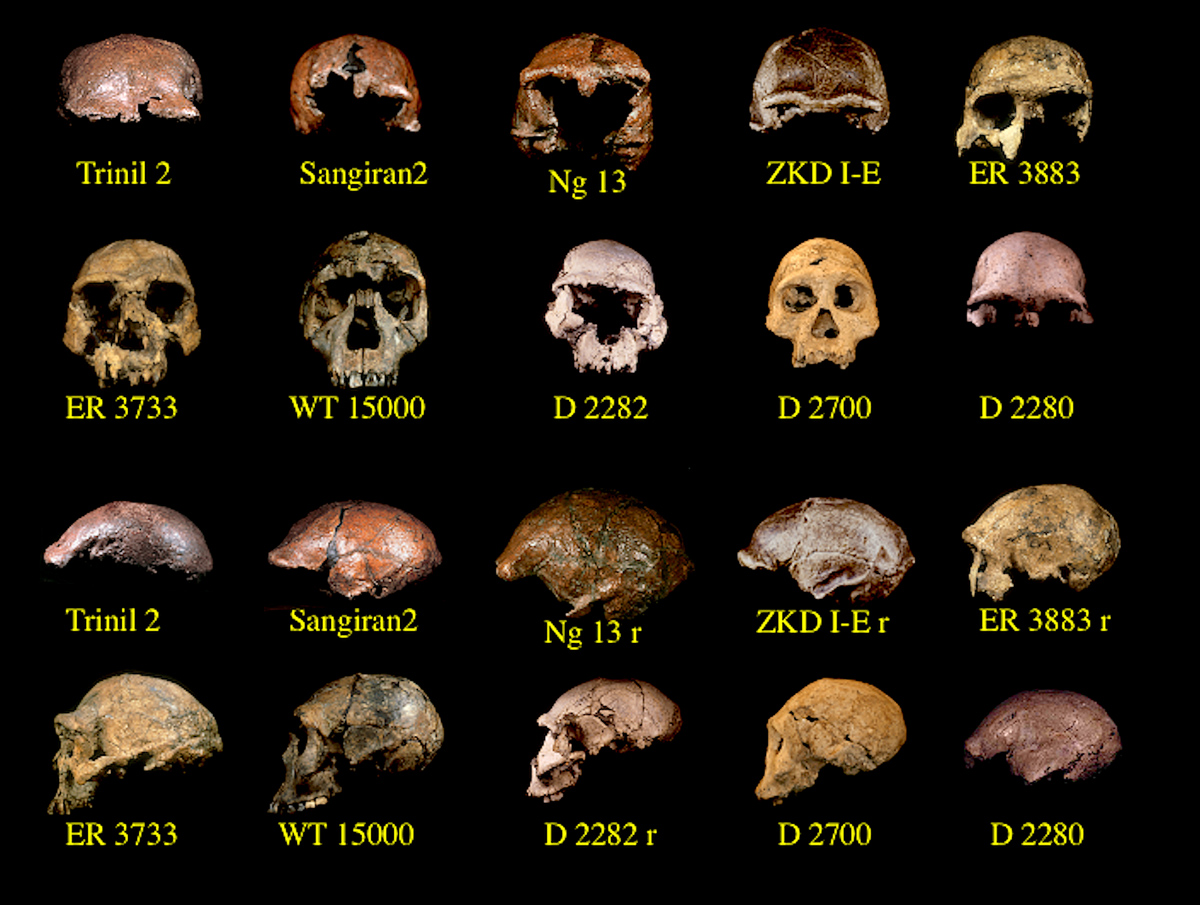 By the 1930s, there were enough specimens to provoke debate on their taxonomic relationships. For example, Weidenreich and von Koenigswald used Sinanthropus and Pithecanthropus as nick- and place-names for what they thought were variants in a continuum of change that culminated in Homo sapiens. Zuckerman, however, argued that specimens subsumed in Pithecanthropus, Sinanthropus, Homo neanderthalensis, and Homo rhodesiensis constituted a group (perhaps genus) apart from Homo sapiens, which should include only recent and Upper Paleolithic humans.

In 1944, the fruit-fly geneticist of the “modern evolutionary synthesis”, Dobzhansky, turned to human evolution. Without first-hand knowledge of the fossils, he nonetheless declared, while early humans may have begun to differentiate taxonomically, culture reversed that trend. Human evolution was a continuum of change characterized by often-marked individual variation. In 1950, the bird taxonomist of the “synthesis”, Mayr, also without first-hand knowledge of specimens, formalized Dobzhansky’s notion, lumping all specimens into Homo and three, chronologically-transforming, wildly-variable species: transvaalensis (early)-erectus (middle)-sapiens (last). The following year, one of the dominant physical anthropologists, Washburn, endorsed this scenario in his “new physical anthropology”.

Eventually, Australopithecus, Paranthropus, and their species, which Mayr subsumed in “transvaalensis”, were resurrected and different species and even genera coined for subsequently-discovered South and East African early hominids. Also, eventually, Homo neanderthalensis and Homo heidelbergensis were removed from Homo sapiens and not long afterward new species of Homo recognized (e.g. antecessor, naledi), including the bizarre “hobbit”(floresiensis), were named Yet, Homo erectus not only continued as the go-to species for non-sapiens Asian specimens, it came to include East African and Georgian specimens. Indeed, Homo erectus remains the taxonomic receptacle for any specimen one thinks is not something else, and, depending on personal bias, the panmictic Old-World ancestor of Neanderthals, Homo heidelbergensis, and/or Homo sapiens (Fig. 1).

Further complicating matters is that orangutan teeth, which are common at Asia sites (e.g. in Vietnam, Java, southern China), are frequently misidentified as hominid, especially if they are small. While restudy of these collections has corrected most errors, the notion of minimal taxonomic diversity continues to inform how Asian human and ape fossils are perceived: If it’s not sapiens it’s erectus, and if it’s not erectus it’s orangutan.

Why constrain potential hominid taxonomic diversity? It is baffling. Yet, while diversity, which, centuries ago, paleontologists acknowledged characterizes plant and animal fossil records, is “permitted” in the “early” and “last” parts of human evolution, it is denied to the “middle”. It is time to revisit “erectus”, without taxonomic blinders. Given the historical baggage, perhaps the simplest approach is to treat specimens as if they were just discovered, and proceed specimen by specimen. If done properly, I doubt the result will be a single, monolithic species.