Why do some people self-harm under distress? Harvard study suggests impulse control is key

Self-harm, or non-suicidal self-injury (NSSI), refers to people intentionally hurting themselves without intending suicide. Common examples include cutting, burning, or hitting oneself. A growing number of adolescents and young adults report NSSI – yet most have no diagnosable mental illness. Although people who self-harm don’t intend to die during these acts, NSSI is more likely to eventually lead to suicide attempts than simply thinking about suicide.

Why would someone self-harm if they don’t want to die? Research suggests NSSI serves as a coping strategy to deal with negative feelings. People with impulse control problems are more likely to deal with distress (e.g., anger, anxiety, or sadness) by whatever means immediately available, making NSSI more appealing than strategies involving forethought. This tendency to act on impulse when distressed is called “negative urgency.” Someone who rates themselves high in negative urgency might choose NSSI to reduce uncomfortable feelings because it requires little or no planning. On the other hand, a person low in negative urgency might consider multiple ways to rid themselves of unpleasant feelings, like calling a friend or exercising.

But self-reported negative urgency among people who self-harm has been largely inconsistent with performance-based laboratory tests of impulse control – until a recent study conducted by researchers at Harvard University and Brown Medical School, who sought to solve this paradox. Dr. J.D. Allen, the study’s lead author, explains: “Most neuropsychological tests don’t assess the kind of impulse control relevant to NSSI: emotion-related impulsivity, or negative urgency. In fact, no validated neuropsychological tests had been specifically designed to evaluate impulse control under the conditions we’d expect to find most difficult for people who engage in NSSI; that is, after an emotional impulse triggers action, particularly if that action was driven by negative emotion. It’s always harder to stop something once you’ve begun. Among people who self-injure, this seems especially true for behavior motivated by distress, like NSSI,” said Dr. Allen. “Our findings help explain why – from a neurocognitive perspective – people who report high negative urgency are also more likely to self-harm.” 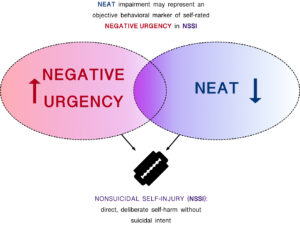 “Our results have considerable implications not just for understanding self-injurious behaviors,” Dr. Allen continues, “but psychopathology more broadly, since arguably all neuropsychiatric disorders are characterized by some degree of difficulty with self-regulation, particularly in the context of powerful emotions.”

Dr. Allen and his collaborators have since identified similar patterns of emotional impulse control deficits among inpatients hospitalized for recent suicidal thoughts and behaviors, shining new light on the remarkably strong link between NSSI and suicide. Rather than NSSI directly increasing the likelihood of attempted suicide, as suggested by other prominent theories, Dr. Allen and his colleagues have recently proposed that performance deficits on laboratory tests of emotional impulse control might represent objectively-measurable behavioral risk markers, reflecting variation in brain functioning that predisposes some people to both types of self-harm (non-suicidal and suicidal). Now a Visiting Scholar at UC Berkeley, Dr. Allen hopes that his work will eventually lead to new ways to assess risk for mental illness, and ultimately, new forms of treatment.