Why do syringe-like nanomachines work efficiently?

Cells of living organisms widely use biological nanomachines: complex or simple systems with size less than ten millionth of a meter. Nanomachines are also used by viruses, which are the form of life that are unable to breed outside the host cell, into which they need to somehow penetrate. Millions of years of evolution led to the emergence of special structures that help a virus to put its genetic material (DNA or RNA) inside the infected cells. The most successful were syringe-shaped devices consisting of two protein tubes: one is inserted into another. With the contraction of the outer cylinder, the inner one pierces the membrane, and information molecules are injected into the cell. 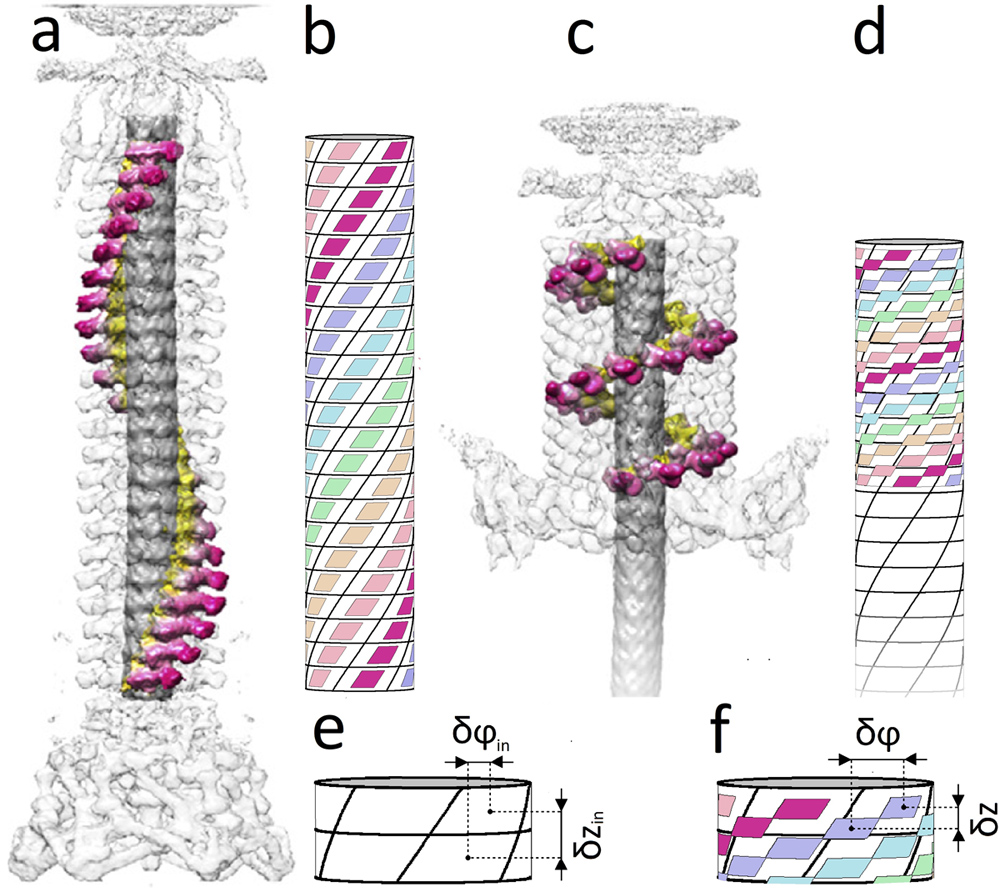 Fig. 1. Extended (a, b) and contracted (c, d) states of the bacteriophage T4 tail. The panels (a, c) (based on the data [N. M. Taylor et al., Nature, 2016, 533, 346–352]) show one of the sheath’s protein spirals in the extended and contracted states, accordingly. The elementary cells of the inner tube (b, d) are shown by cylindrical parallelograms bounded with solid black lines. Each cell corresponds to one protein molecule of the inner tube. The protein helixes of the sheath are represented by small parallelograms whose centers coincide with the protein positions. In the extended state (a, b), the structures of the inner and outer tubes are commensurate: the parameters (δz, δφ), which are explained in (e, f), are the same for the both tubes. In the idealized contracted state (d), the protein helixes of the sheath are arranged along the diagonals of the inner tube elementary cells and the commensurability reappears.

Although in general this mechanism has been known for several decades, relatively accurate data on the structure of two such systems: the bacteriophage T4 (virus, which attack bacteria) and the protein pyocin R2 (the main “weapon” of the Pseudomonas aeruginosa) have only been obtained in the last three years. Bacteriophage T4 uses a syringe nanomachine to inject viral DNA into its prey. The R-type pyocin proteins, on the contrary, do not inject any substance into the cell, but destroy it, making a “hole” in the shell and disrupting the electrochemical equilibrium. We have constructed a simple model based on the example of bacteriophage T4 and pyocin R2, which explains the structural and operational features of syringe nanomachines.

Two tubular organelles of nanomachines: hollow internal tube – “sword” and its cover work together harmoniously, ensuring successful penetration into the cell. After the contact with the victim’s membrane surface, the outer tube, formed by slightly twisted spirals, undergoes restructuring – it contracts and shortens. At the same time, a hard “sword” hidden under the outer tube starts to play its significant role: it is exposed and pierces the cell membrane. As we have shown, the structural transformation associated with this mechanism preserves a certain relation (which is called commensurability) between the symmetries of the inner and contracted outer tubes (Fig. 1).

Any work requires energy, and all systems can operate only using their internal “savings”, which cannot be completely spent. This principle is also true for a syringe nanomachine. The extended state of the sheath has the greatest internal energy. The hidden inside “sword” affects the geometry of the contraction process, causing the system to move to the state with minimal energy and to do a great work. We have found a beautiful and simple principle according to which the parameters of the outer tube (distance between protein rings and angular shift between them) are changed when the nanomachine operates. The appearance of commensurability reduces both the energy of interaction of the “sword” and sheath and the internal energy of the system. The obtained gain allows “sword” to increase a force piercing the cell membrane, making the nanomachine work more efficient.

Investigation of the structure and functioning principles of the syringe nanomachine used by bacteriophages is important for antibiotic therapy, especially in the case when harmful microorganisms are resistant to traditional antibiotics. In addition, bacteriophages are the promising vector (nanocontainer) to transfer DNA sites in genetic engineering. We believe that discovered by us structural phenomenon of molecular nanomachines can be observed in other similar, but still poorly studied nanoobjects. These are, for example, phage-like structures that help sea animals to navigate in space, syringe-like cell organelles and some other nanodevices. In any case, the knowledge that the tubes of a molecular nanomachine can become commensurate after it has been triggered will allow the construction of more accurate structural models of these biological systems.