Why genomic research must be diverse and inclusive

In April 2003, the world witnessed the completion of the human genome project: a grand scientific feat comparable to man’s first steps on the moon. This 13-year, publicly funded undertaking determined the DNA sequence of the human genome and opened the door for the development of a new discipline called genomics. This new field of biomedical research provided scientists with the ability to study the entire genetic makeup of an organism. The human genome project would not have been possible without input from scientists all over the world. It was the world’s largest, government sponsored, collaborative biological project. Since then, improved genomic tools and technologies, along with scientists’ increasing capacity to understand the information generated by them, have made possible new insights into human history, disease etiology, differential susceptibility to disease, and the genetic causes of variable drug response at individual and population levels. 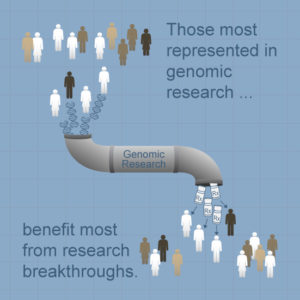 Scholars in science and medicine predict that one day it will be common for patients to have access to affordable individualized genomic information. Complex interactions that occur between genes, as well as between genes and the environment, may be readily available to help guide physicians’ decision-making in drug therapy, cancer treatment, preventative medicine, screening, and diagnosis. With the appropriate policies in place (e.g., insurance, ethics, legal, public health), genomic research could lead to a medical practice utopia that matches patients to health and treatment measures aligned with the varied biomedical, lifestyle, and environmental factors that influence health outcomes, including genetic makeup.

The road to this utopia, however, is paved with barriers and challenges: questions about disparities and health insurance coverage to decisions about clinical trial enrollment and community engagement threaten to circumscribe the reach of genomics. Current research practices and policies lend themselves to a future dystopia in which genetic benefits are skewed in favor of advantaged populations. Within the research context, Genome-Wide Association Studies, observational studies that identify genes related to traits, concentrate on those of European ancestry over 90 percent of the time. Despite its beginnings as a global effort, study of the human genome and gene discovery has disproportionately focused on one segment of our worldwide population. This lack of diversity is being increasingly appreciated at the national and international levels resulting in efforts such the H3Africa initiative, PAGE consortium, and the TOPMED program.

Limited diversity and inclusion in genomic research presents the very real possibility that billions of research dollars and efforts will be stymied by insufficient understanding of human genetic variation—and therefore have reduced benefit to any patient with diverse ancestry—the majority of all patients in countries like the United States and the United Kingdom. Meanwhile, findings from studies of diverse populations have led to new understanding in biology and to medicines that can benefit individuals of all ancestral backgrounds.

We need to comprehensively study our diversity given that an overwhelming majority of individuals across the world are of mixed ancestries. Individuals and populations descend from a range of geographical and cultural backgrounds that have influenced their genetic makeup. This human diversity needs to be embraced, celebrated, and studied. If we do not study diverse people, our understanding of human genetic variation will be limited and so will our ability to apply knowledge about genomics.  Since the study of genomics is increasingly helping us to understand how to treat different diseases such as cancer, prescribe medicine, diagnose and treat people based on biology and environment, and enrich genetic screening programs, all of these applications are at risk if diverse populations are left out of genomic research.