It is an obvious well-known issue that diabetic wounds are poorly healing, but the molecular and cellular alterations leading to this impairment is not clear. Many studies concluded the dysfunction of dermal fibroblasts as the main responsible cells throughout wound healing process in diabetic condition, and disruption in their proliferation and cell cycle signaling pathways, but lack of sufficient data at the molecular level stands still. The aim of the present study was to demonstrate the impact of diabetes and the role of Photobiomodulation therapy (PBMT) through low level laser irradiation on secretory profile of human diabetic fibroblasts. 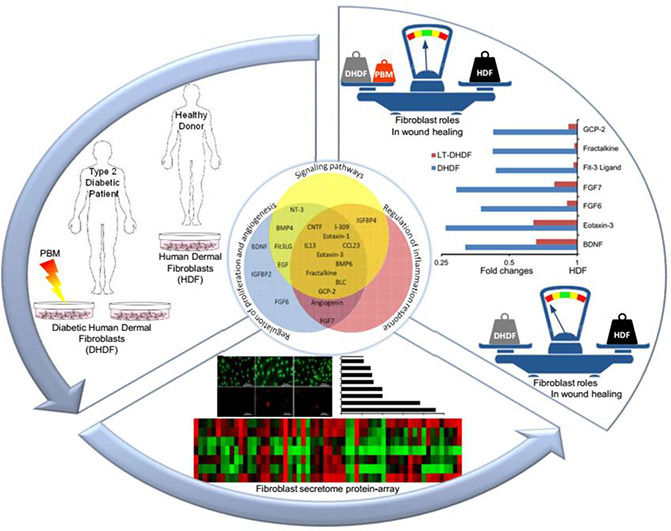 Fig. 1. Hopefully, it seems that considering the impact of type 2 diabetes on human fibroblast behaviors and, consequently, the role of PBMT on secretory profile of the diabetic fibroblasts, could raise our knowledge to manage diabetic ulcer through a feasible and cost effective intervention, specifically the PBMT.

Primary human dermal fibroblasts from normal (HDFs) and diabetic (DHDFs) donors were harvested. For PBMT, the DHDFs were irradiated with a Helium-Neon laser at 632.8 nm wavelength and energy density of 0.5 J/cm2, as laser treated group (LT-DHDFs). Next, some cellular behaviors and secretory profiling array for 60 growth factors/cytokines were investigated in LT-DHDFs and then compared with those of controls.

It has been proved that blood supply and new vessel formation is insufficient in diabetic wounds, and we noticed a significant reduction in the secretion of cytokines involved in angiogenesis process in diabetic cells as compared to normal cells, respectively.

Immune response is critical in wound healing process and we know that inflammation persists in diabetic wounds. Our study results showed that the secretion of  a series of cytokines that are involved in immune system related cell pathways, such as response to stress, chemokine mediated pathway, inflammatory response, immune response, and leukocyte chemotaxis, are significantly reduced in diabetic cells. On the other hand, photobiomodulation increases the secretion of some of these cytokines, which collaborate in response to chemokines, chemokine mediated pathway, and granulocyte chemotaxis in laser-treated cells.

Overall, the results of the present study indicated that type 2 diabetes has a significant negative impact on the survival, proliferation, and migration of human dermal fibroblasts. We also demonstrated a significant reduction in the secretion of cytokines involved in cell proliferation and angiogenesis, inflammation response, and signaling pathways from diabetic fibroblasts, while the PBMT via low level laser irradiation, as a feasible and low-cost treatment, can partially compensate these impairments at cellular levels.