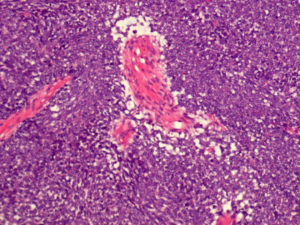 Fig. 1. The microphotograph shows a hematoxylin and eosin stained slide taken at x100 as original magnification of a blastema component of a triphasic nephroblastoma or Wilms tumor. The tumor cells exhibit a pronounced basophilia and a high nucelus to cytoplasm ratio.

Moreover, the protein encoded by this gene contains domains of transcriptional activation, DNA binding, and oligomerization. TP53 responds to diverse cellular stresses to regulate expression of target genes, in that way inducing cell cycle arrest, programmed cell death (apoptosis), senescence, DNA repair, or changes in cellular metabolism. The use of alternative promoters and alternative splicing of this gene result in multiple transcript variants and isoforms. It has been demonstrated that integrated analyses support two significant classes of genetic changes that preserve the progenitor state of the tumor cells and/or interrupt healthy development. Euploidy means the healthy status of the chromosomal set (46, XY or 46, XX). Aneuploidy refers as to an abnormal status of the chromosomal set, such as triploidy harboring three times the haploid set (3x 23 equals 69 chromosomes) and trisomy 21 having an extra-chromosome 21 (47, XY,+21 or 47, XX,+21). There is a crucial difference between constitutional and acquired aneuploidy. In constitutional aneuploidy, the ploidy status is changed in many tissues from the earliest stage of embryonic development with some variants including mosaic in which only some tissues have an abnormal status. In acquired aneuploidy, the abnormal status exists only in the transformed cells. Subsequently, constitutional aneuploidy can predispose to cancer in many fashions. Constitutional aneuploidy can exert a direct oncogenic activity in a cell-autonomous manner.

This situation occurs in cancers in which the same aneuploidy is also common in sporadic cancers such as trisomy 21 (three times of chromosome 21) in acute leukoblastic leukemia, trisomy 8  (three times of chromosome 8) in myeloid leukemias, and trisomy 18  (three times of chromosome 18) in Wilms’ tumors. Alternatively, cancer may arise because of aberrant effects of the trisomy on immediate microenvironment, disorders of the sex chromosomes, hormonal replacement therapy, susceptibility of abnormally developed organs to carcinogenesis (e.g. altered immunosurveillance). An increase of the incidence of tumors has been observed in (I) specific disorders: aniridia, hemihypertrophy, and basal cell nevus syndromes among others; (II) cytogenetic abnormalities (e.g., trisomy 18 syndrome); as well as (III) chromosomal instability syndromes, including Fanconi anemia, ataxia-telangiectasia, and Bloom syndrome.