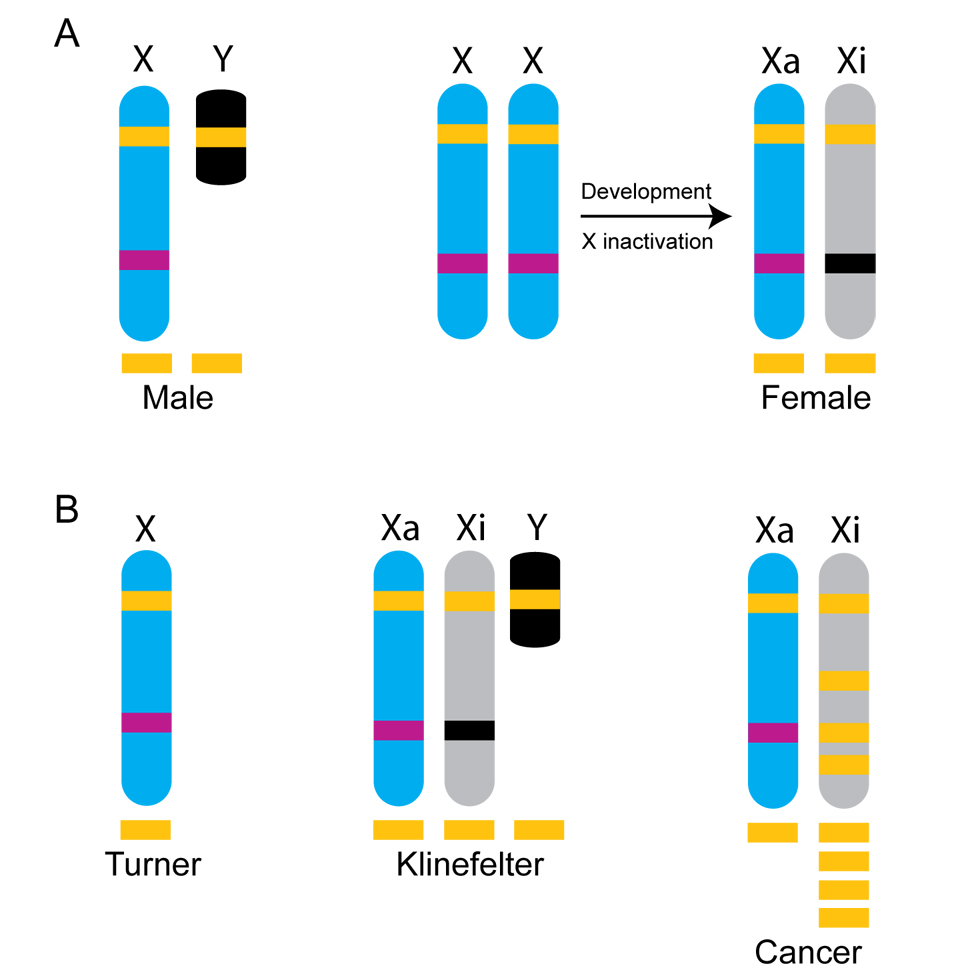 X chromosome inactivation discovered by Mary Lyon in 1961 and now called Lyon’s law consists in the silencing of one X chromosome at random during early development (Fig. 1A). Efficient repression of genes on an entire chromosome in a coordinated manner, as well as faithful maintenance of silencing in subsequent cell divisions require precise and robust molecular mechanisms. Once initiated by the long non-coding RNA XIST (X inactive-specific transcript) X inactivation is maintained throughout the life of the organism thanks to epigenetic mechanisms such as histone modifications and DNA methylation that lock in silencing and are passed on to daughter cells. The inactive X chromosome also adopts a unique condensed structure and occupies preferred sites in the nucleus of the cell. Despite these multiple regulatory layers that ensure robust repression of genes on the inactive X chromosome, some genes escape silencing.

We have shown that about 5% of X-linked genes escape X inactivation in mouse, while others have shown that about 15% of genes escape X inactivation in human. Interestingly, a subset of escape genes is conserved and common to multiple tissues and species, whereas other escape genes are tissue- and/or species-specific. Escape genes uniquely lack repressive epigenetic marks that decorate silenced genes, and there is evidence of elements that protect regions of escape and inactivation along the X chromosome. Some of the escape genes have identical (called pseudoautosomal) or similar copies on both the X and Y chromosomes, and thus would be expected to have similar expression between the sexes (Fig. 1A). However, a number of escape genes have lost their Y-linked copy, which even if it persists can often acquire a unique function in males. In that case the X-linked copy would be expressed more highly in females, resulting in sex differences. Escape genes that show significant differences between tissues, together with common escape genes, are being explored as excellent candidates for roles in sexual dimorphisms during development an in specific tissues.

Improper dosage of genes that escape X inactivation has been linked to abnormal phenotypes in individuals with an abnormal number of sex chromosomes (Fig. 1B). Indeed, Turner Syndrome (X) associated with poor in utero viability, short stature, infertility and other anomalies can be interpreted as a deficiency in expression either from Y-linked genes or from X-linked genes that escape X inactivation. Conversely, Klinefelter syndrome (XXY) individuals characterized by tall stature, infertility, and other anomalies have overexpression of such sex-linked genes. One specific gene implicated is SHOX, whose loss or gain explains the short stature of Turner patients or the tall stature of Klinefelter patients, respectively (Fig. 1B). Pathological escape from X inactivation has also been implicated in acquired diseases such as cancer where some tumors, for example breast carcinoma, can display reactivation of X-linked genes that are normally silenced (Fig. 1B).

In summary, X chromosome inactivation and escape from inactivation are complex processes of gene regulation with profound implications in terms of sex differences in health and disease. Using X inactivation as a model, we are now gaining a better understanding of principles of basic gene silencing, chromosome organization, X-linked diseases, and sex chromosome disorders.